on August 09, 2009
A holy trinity of plants: Ligustrum japonicum, commonly called Japanese Privet, as mundane as daily routine. Rosa 'Iceberg', common as grass. And an Olive tree, never mundane, transcending commonality as a symbol, a food source, a intimate companion and enabler of human civilization.

Putting them together creates a whole greater than the sum. The deep green of the Ligustrum, the Olive's gray green, and the apple green of 'Iceberg', all jeweled by the Ligustrum's black berries, the Olive's black fruits, and pure white roses. Ligustrum, heavy, clipped, inert, is serious and dour, while the airy Olive and rose toss their limbs in the sensuous pleasure of a breeze.

Is it bland, this trinity? Or soothing, stable--a rock-solid triumvirate, each individual providing something the other two do not possess, without denying the other's virtues. 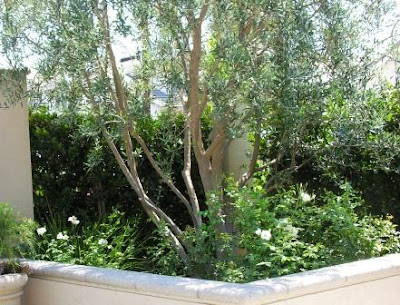