on August 12, 2009
One special feature of our little neighborhood is the survival of native plants. Because the area is hilly, when the land was originally cleared to plant citrus trees, there were areas of slope too steep to be farmed, too steep to be cleared.

Thus some natives survived, despite two generations of farming in the area. When the land began sprouting houses instead of lemon and orange trees, the same rule applied: too steep to build on, too steep to bother clearing. Relatively large lots also made a difference--there was room to leave some strips of land untouched.

So, let's survey what has survived. Toyon (Heteromeles arbutifolia), is also known as Coyote Berry, because coyotes eat the berries when they can't catch their preferred food, which is house cat. Toyon is a large shrub that eventually becomes a graceful small tree. It takes pruning and irrigation well, survives on rainfall alone, and is useful as a screen. Here's a Toyon screen in the neighborhood: 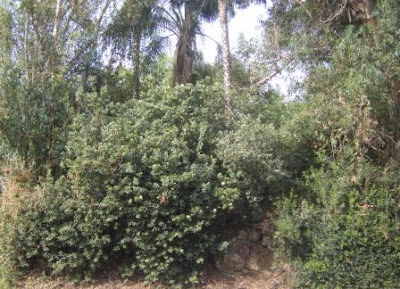 Here are the delicate white flowers: 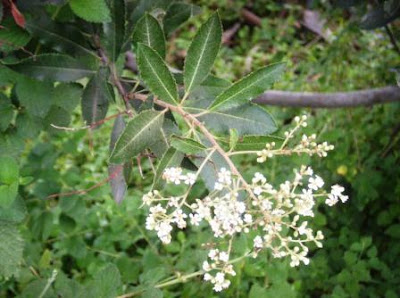 And here, the newly developing berries. The berries turn red in early winter, which is the source of their other common name, Christmas Berry. 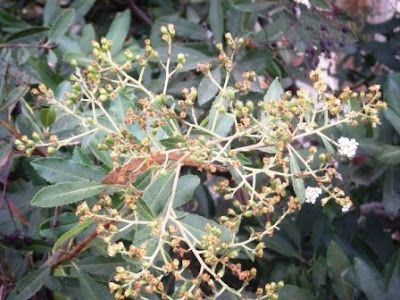 As an airy small understory tree, here's one gamely surviving the torrents of crap rained down upon it by the non-native Eucalyptus: 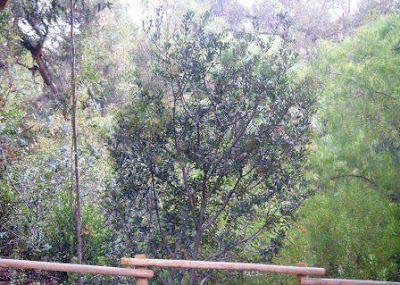 Another common neighborhood shrub is the Sugar Bush, Rhus ovata. It also tolerates irrigation and pruning very well. The local park has a volunteer that managed to sprout and grow large; one side has been pruned into a cube by the groundskeepers to keep the sidewalk passable, but the other side grows untouched: 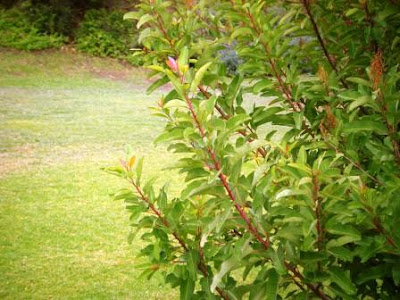 In a bare unirrigated spot, on a rocky slope, it does just as well: 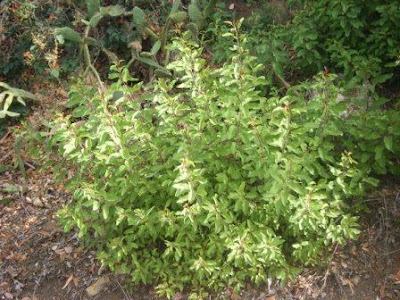 Another Rhus, but a vastly less desirable one, is Poison Oak, Rhus diversiloba. I've see this in only one spot, a county-owned strip behind my neighbor's house: 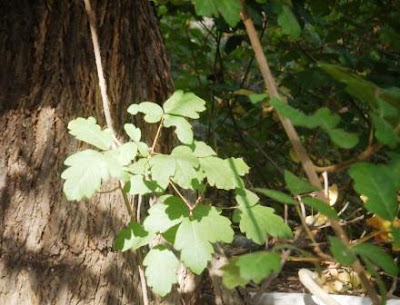 Perhaps the native shrub most like common cultivated ones is Prunus ilicifolia. It also makes a good screen, a beautiful hedge or small tree, takes irrigation, clipping or pruning without a problem, yet does well unwatered. With its glossy, deep green foliage it looks like a Camellia out of bloom: 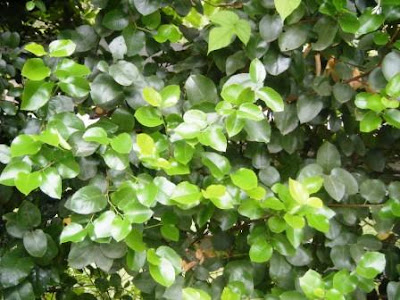 A few miles from here one can find wild growing Yucca whipplei, and I've planted one in our garden, but not one other have I seen on our walks. Opuntia littoralis, Coastal Prickly Pear, has been the only native succulent I've spotted. Here's an Opuntia by the hiking trail: 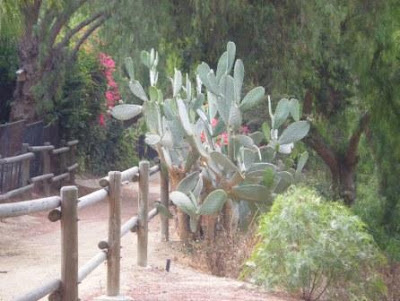 And one on a neighbor's rocky slope: 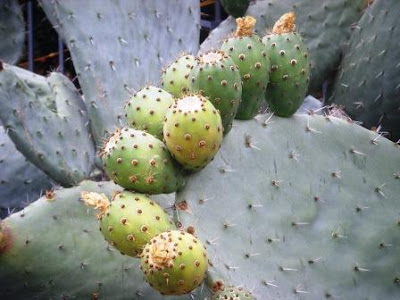 It's loaded with unripened fruit: 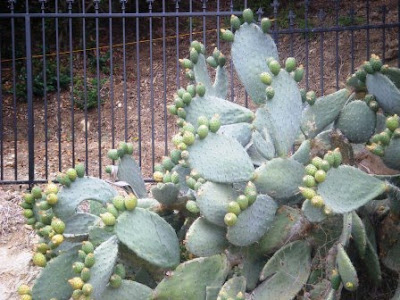 California Buckwheat, probably Eriogonum fasciculatum foliolosum, grows around the corner on yet another dry rocky slope. The flowers are white in spring and turn rust color as they dry out. I thought at first it was an exotic, a weed from Europe or Iowa, but no, it's quite native. 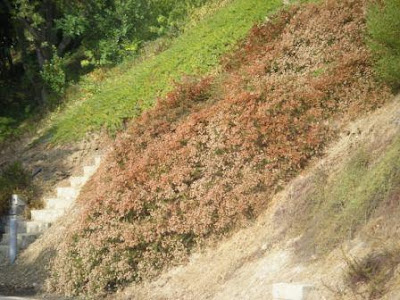 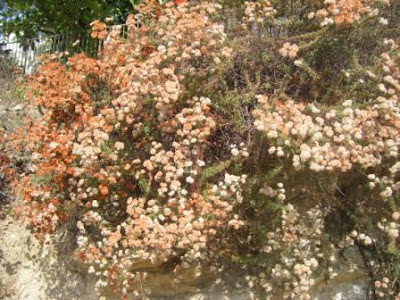 I finish with that most famous and most beloved of California native plants, the Coast Live Oak, Quecus agrifolia. There are just a few here and there, managing to sprout and grow in odd places. They were probably all cut down when the lemon orchards began to go in around 1920, or well before that for use as firewood. Here's one in the curve of the road, a couple of houses from here, stubbornly battling a Eucalyptus for light and space. I'm cheering on the Oak: 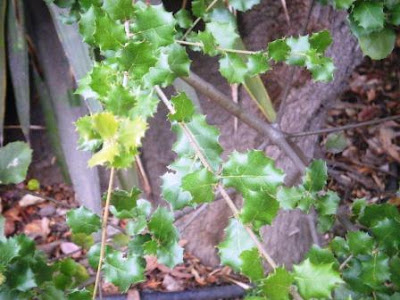 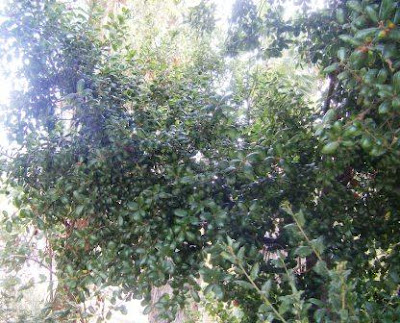 And an acorn, a hope for the future. I am thinking to collect and plant them here and there, in likely, uncultivated spots. 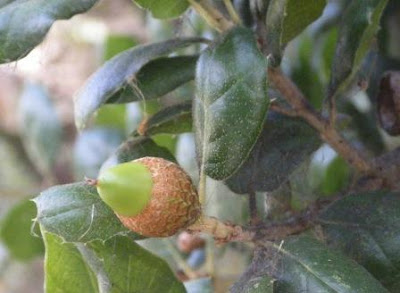 If I had known better, I should have planted our lot with Oaks and left the Toyon and Rhus ovata to seed in as an understory. I really should have. I should have left the Rhus integrifolia down in back, where Rosa 'Golden Celebration' now dominates. By now the Oaks would be sizable and the water bill negligible. It took me a few years and a lot of dog-walking to even notice the native plants here and there, to realize they were survivors of the original inhabitants, that they are their own kind of beautiful, and are far more appropriate to this land than just about everything I've planted in our garden.

But if I had "known better", there would have been no roses--no sweet, fat, perfumed, sensuous, luscious roses. I am reminded of the wise sinner's prayer: "Oh God, make me good--but not yet!" In other words, where roses are concerned, I'm planning to sin a while longer.
California native plants