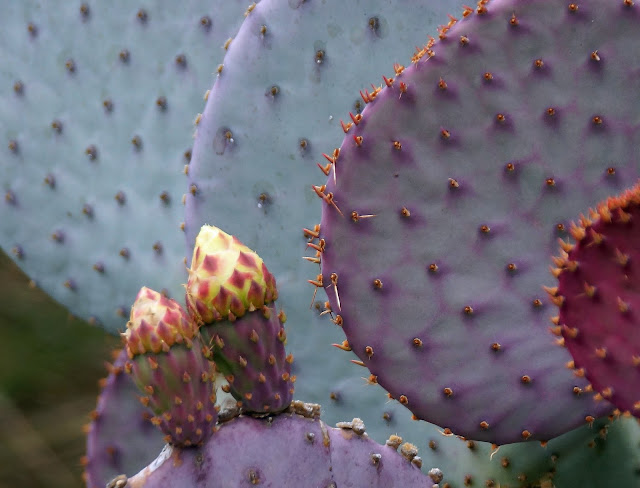 Random photos from Huntington.  Agave ocahui has long fibers curving up the lower part of the inflorescence. 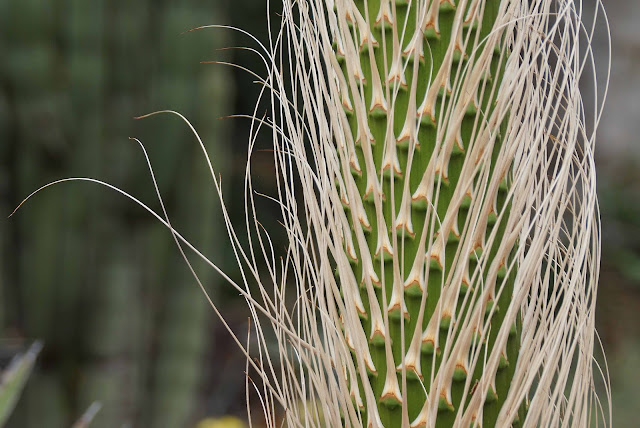 Here are three A. ocahui in bloom: 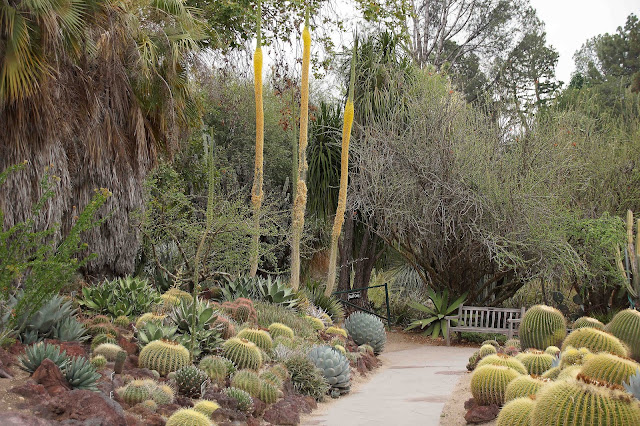 The coating on the black tips of--Agave applanata 'Cream Spike'(?)--creates a purple haze on the base of the black spines.  A cool effect. 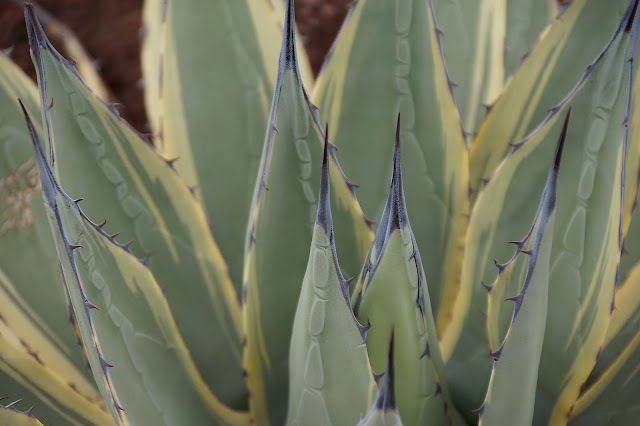 Echinopsis robinsoniana.  We've had two wonderful weeks of cool, overcast weather with a couple minor rain storms;  what a pleasure it has been.  It makes for white-skied photographs, yet I'll take the cool weather over heat any day. 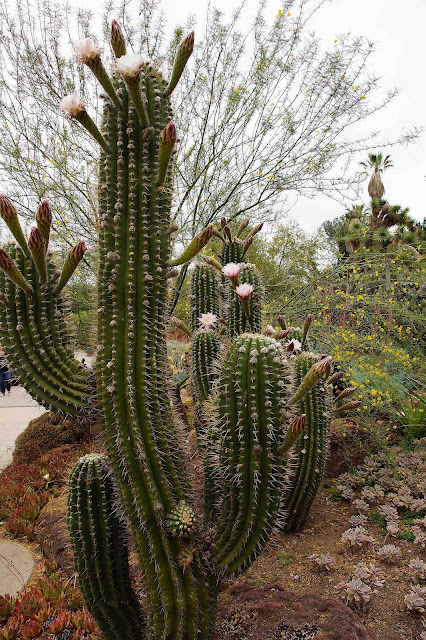 A mass planting of Echium wildprettii commencing its show. 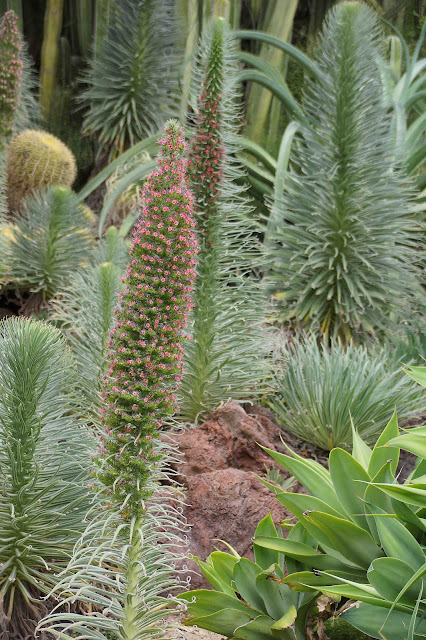 This small area will be eye-catching for the next couple of months. 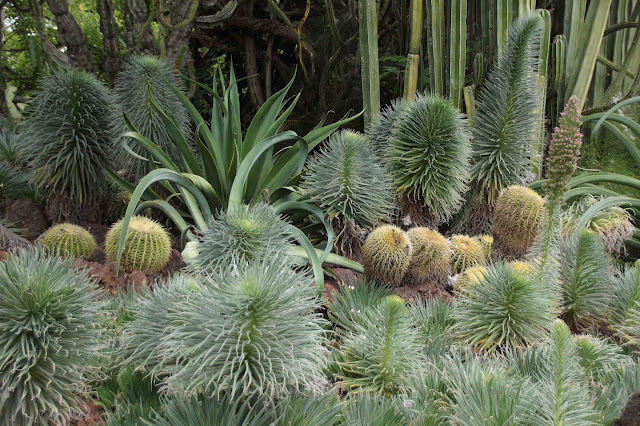 A mass planting of Aeonium 'Mardi Gras', Echeveria elegans(?), and a rock near the Echiums. 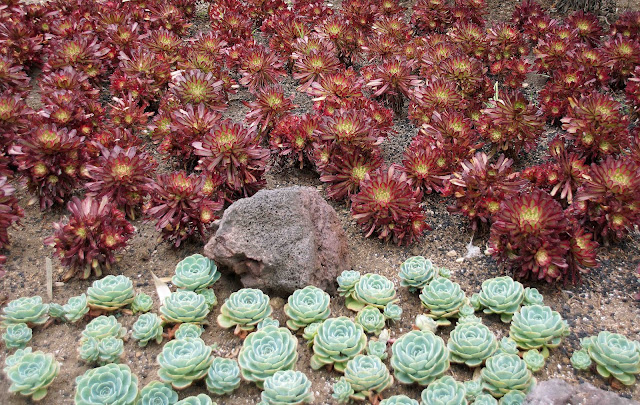 A very deep green Agave marmorata.  Mine are blue-green to nearly silver.  The deep green version is just as good. 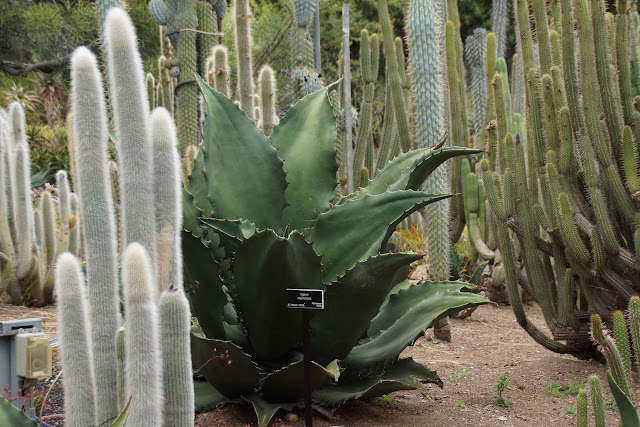 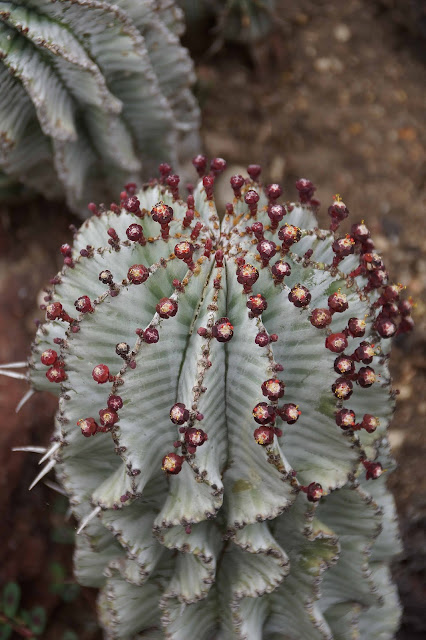 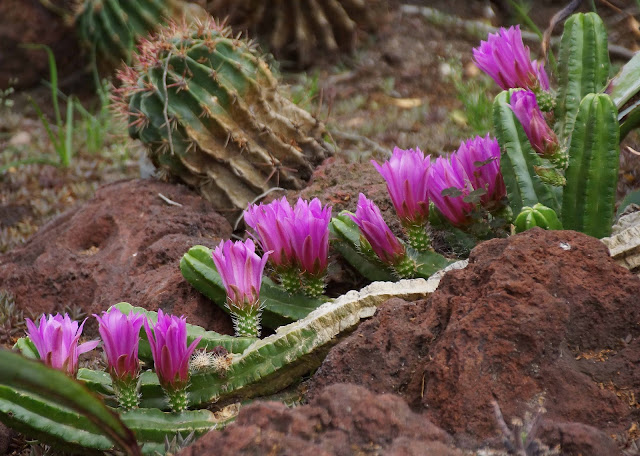 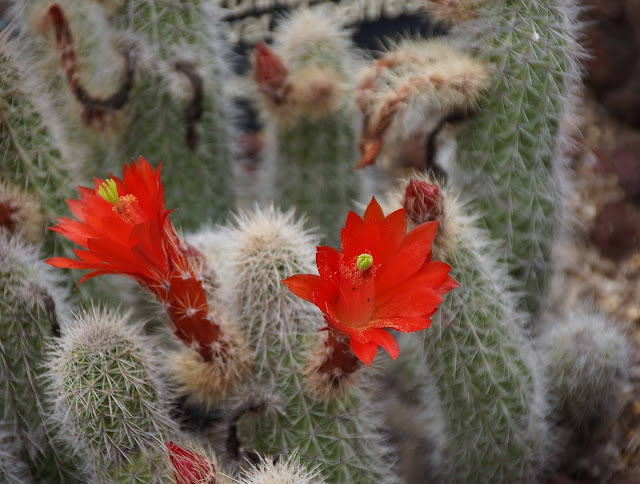 I liked the line of black Aeonium here--they gave the scene line and direction. 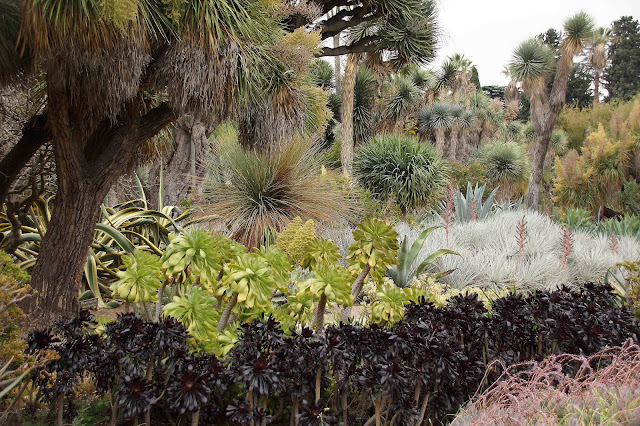 My favorite image of the visit was this: Yucca rostrata in bloom with two Blue Flame Agave at their base.  The 'Blue Flame' leaves look very flame-like when the plants are mature.  A blue sky would have made it perfect. 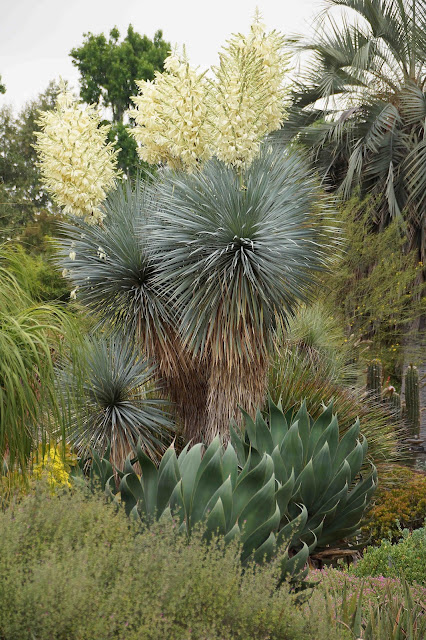 Now a dramatic change of surroundings at the entrance to the Shakespeare garden.  Green, the green that screams "well watered".  Agapanthus: 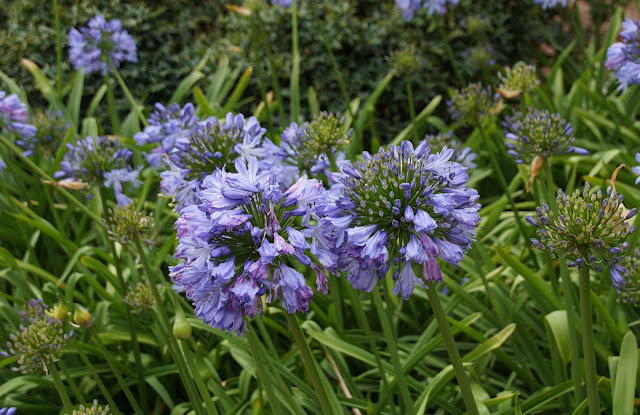 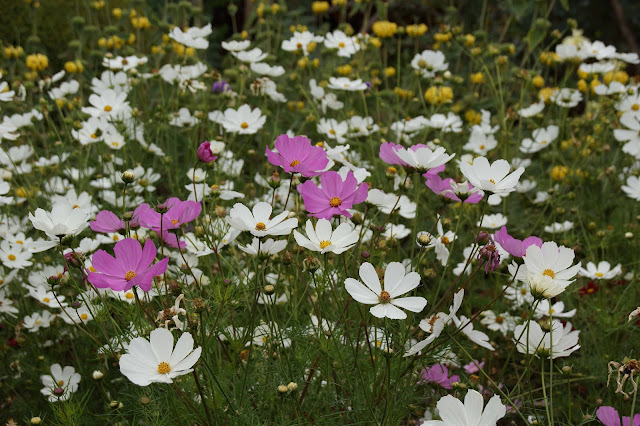 Back at the new entrance garden, they've installed a more permanent solution to prevent foot traffic on the rill.  After a recent blog post about the entrance garden, I received an email from a Huntington worker who explained that the rill was intended to be walkable.  However, visitors quickly began using the rill as a toddler wading pool and infant bathing station, which was not intended.  Hence the wire trellis barriers there the last time we visited.  They've been upgraded to these: 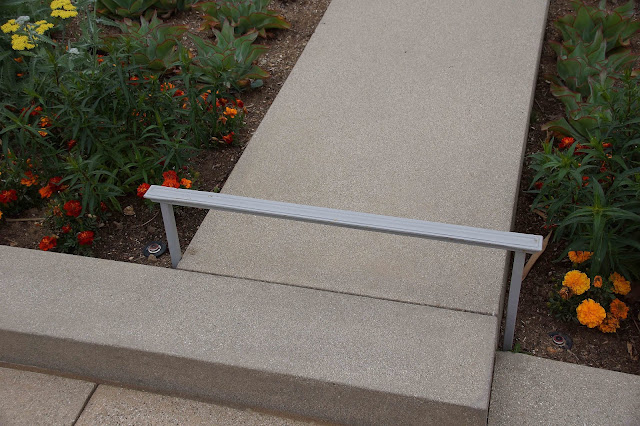 A Mallard was the only wader we saw.  My other favorite image of the day.  The Mallard was glaring at everyone who passed.  He had attitude.  His rill. 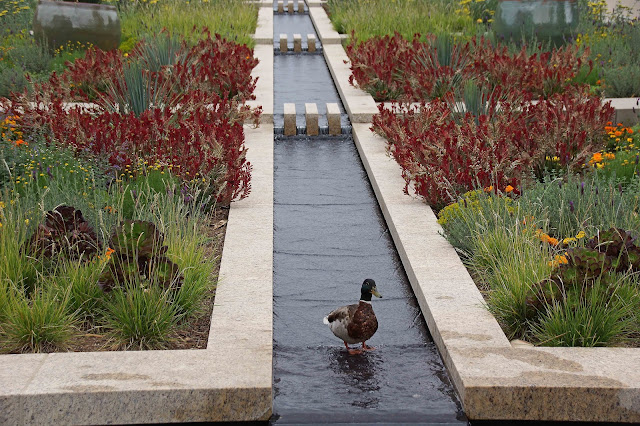 Many more plants in the ground since last we were there, and less marigolds. 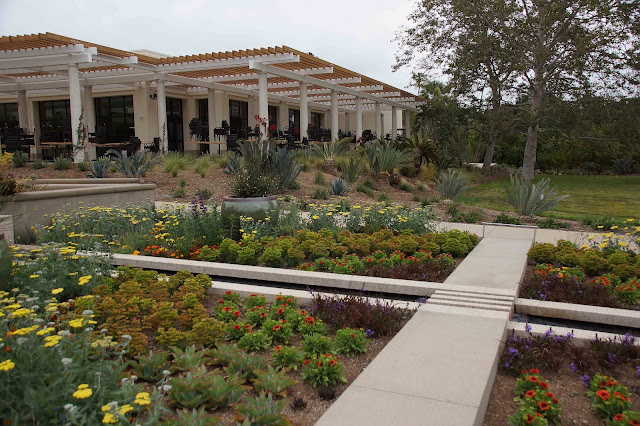 Update:  added shot of 'Cream Spike' to try to indicate size.  The lavender-blue tip effect may also be more visible. 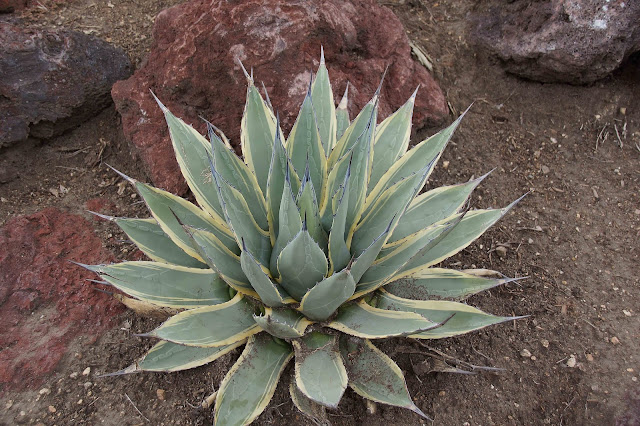 Also--a forgotten photo of Echinopsis robinsoniana--how could I forget such a flower? 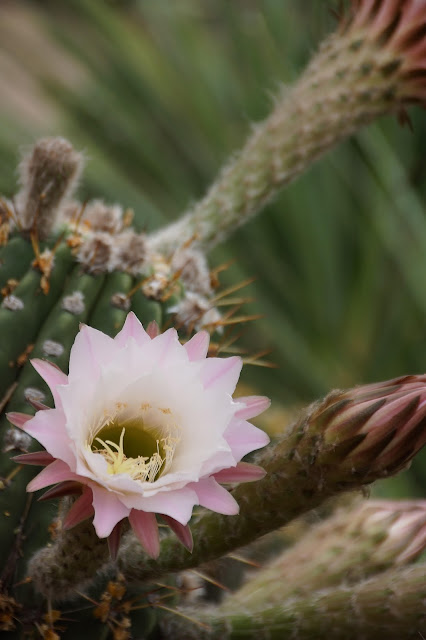