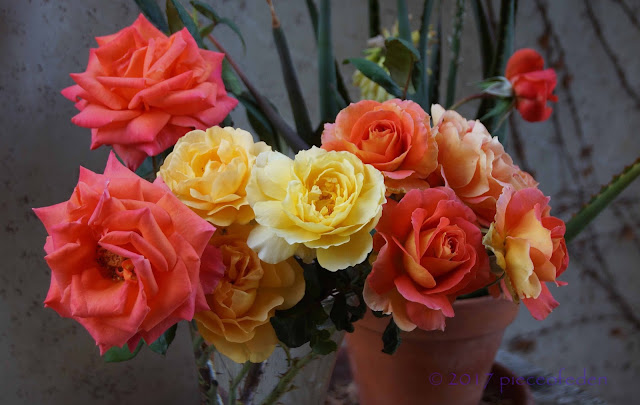 Pruning continued on a gorgeous 78F (25C) day.  Rain would be better, of course, but might as well enjoy the gorgeous.  I also moved some plants around.  Moved 'Cinco de Mayo' here because it wasn't worthy of the prime spot it had been in.  Nice flowers, but not a lot of them, and the plant itself was not overly attractive. 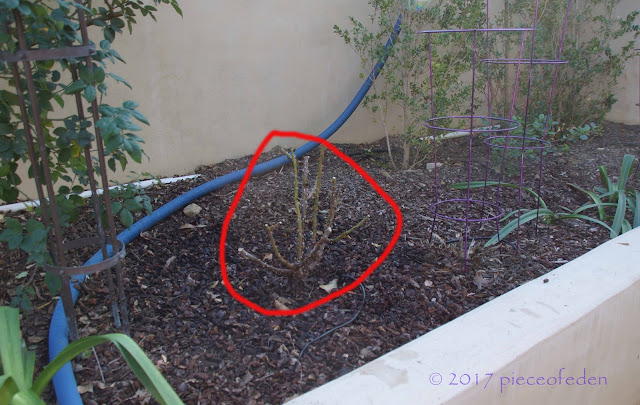 Of course complications ensued--there's an irrigation pipe right where it should not be.  I broke it planting 'Cinco', and digging out 'Cinco', I broke it again.  Purple line is how the pipe ran,  pink circle around the broken pipe.  I'm going to move it so this doesn't happen again.  Stupid place for an irrigation pipe! 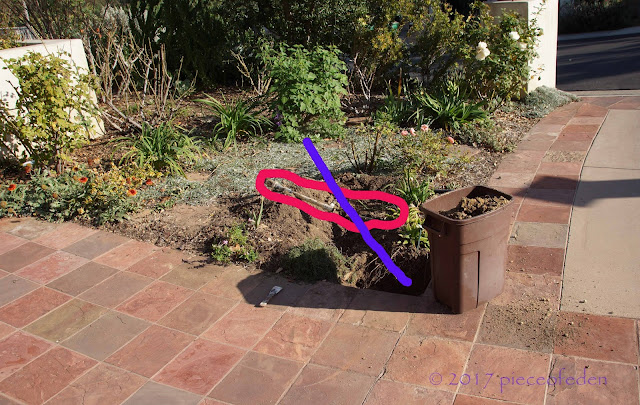 Planted a dozen Liatris spicata tubers, roughly where the red circle is in the next photo.  I had Liatris for several years back in the 00s, and it was a nice summer (I think) bloomer.  Gophers got the tubers eventually.  Time to try again. 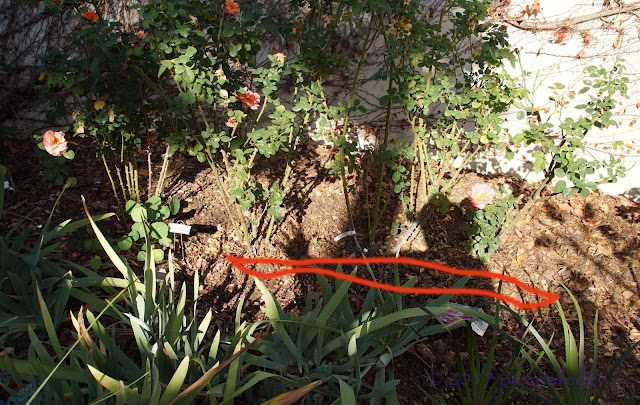 Also planted some 'Texas Supreme' onion seedlings.  Onions in winter in California are ridiculously easy.  Plant, make sure they get water, and harvest in a few months. 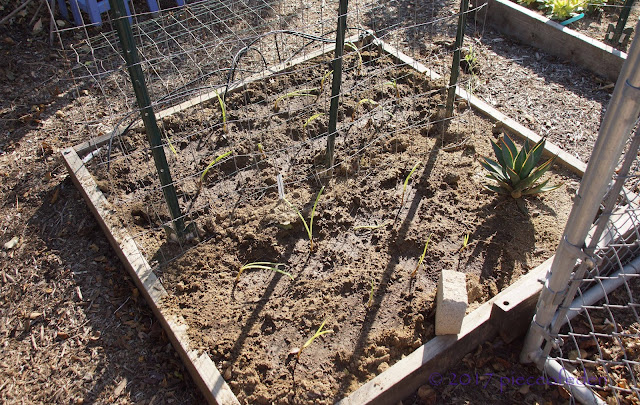 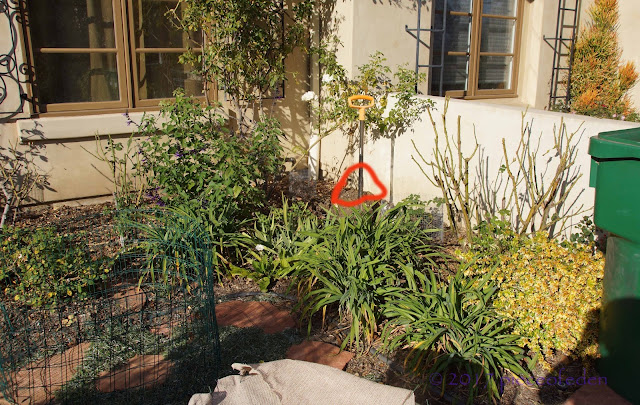 Rose planted, then watered, protected with fencing against rabbits, and shade cloth against the sun. 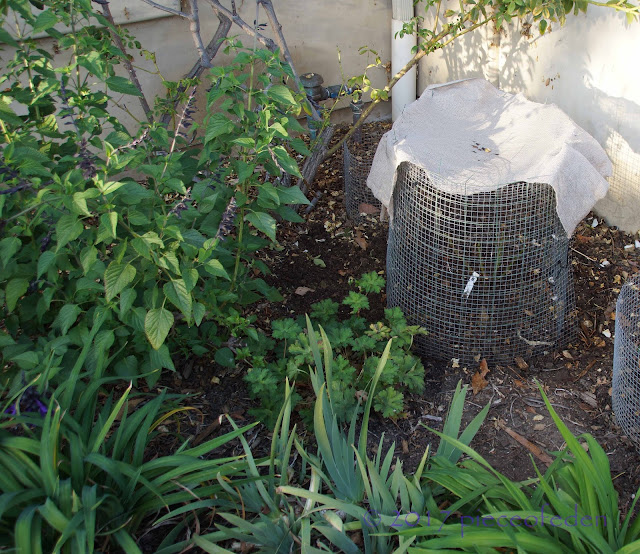 One of the 'Waverly's here on the other side of the wall, where the hummingbirds can enjoy the flowers, should the plant survive. 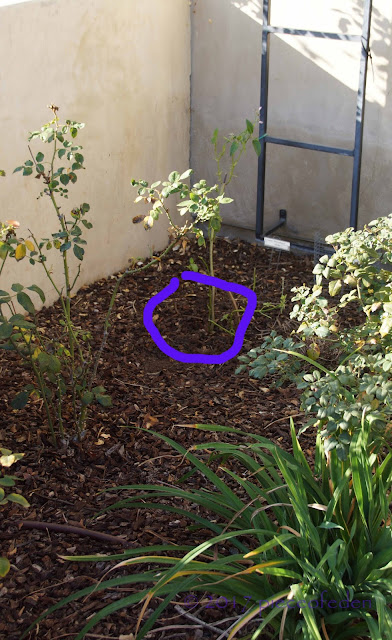 Removed 'Golden Buddha' rose which I did like, but it felt like time for a change--I moved 'Home Run' from the shade of the Oak tree to 'Golden Buddha's spot.  I supposed I could retrieve 'Golden' from the green waste bin and try it in the gully next to 'Cinco de Mayo'...
Agave bovicornuta would fit into 'Home Run's old spot, as it needs some shade to preserve its distinct green color. 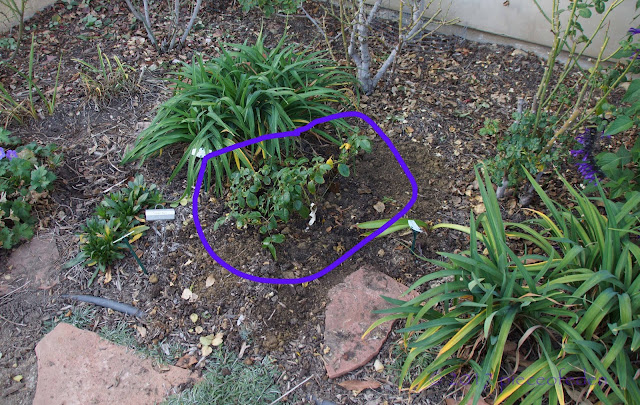 While walking back and forth and back and forth pruning and moving plants there was good stuff to look at.  Grevillea 'Kings Fire' opened another flower.  From this angle the flower looks like some sort of crazy duck. 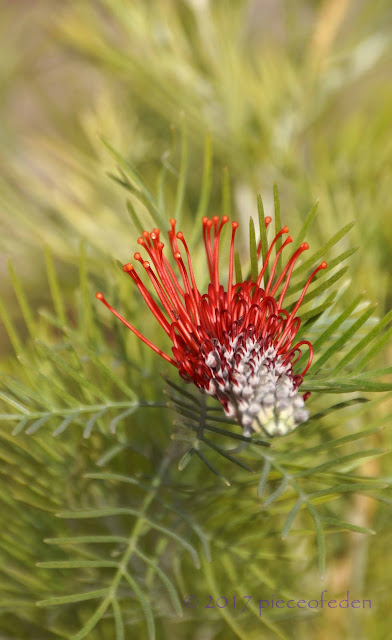 Leucospermum 'Tango' flowers are opening--they open a day-glow orange that stuns the eyes. 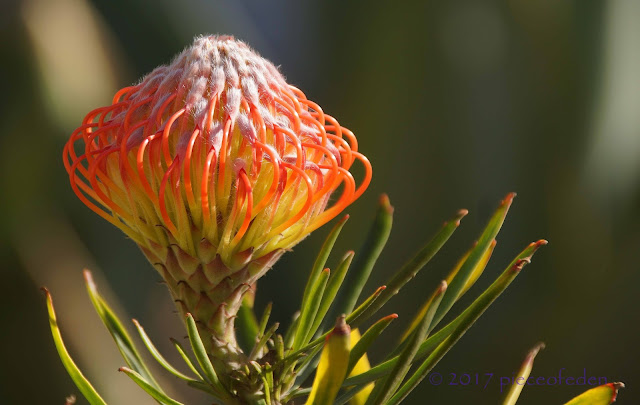 I tried and tried to get all the flower stems on Echeveria coccinea into the frame, but got only about half of them.  Quite a show! 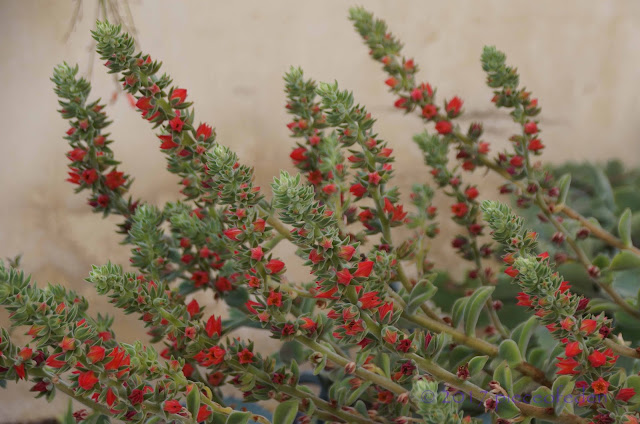 Leucadendron 'Reverse Polarity' doing that stained-glass-window thing that Leucadendrons do. 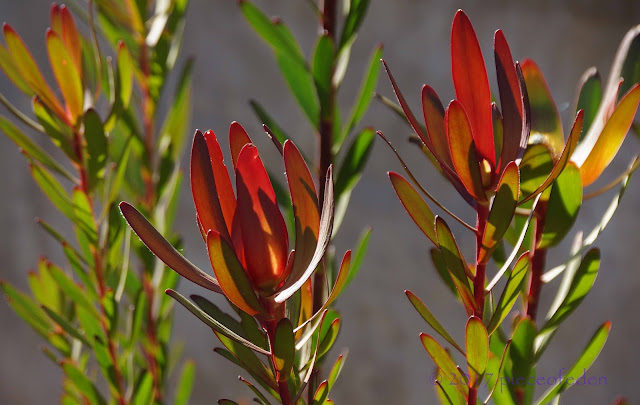 Not bad in this light, either. 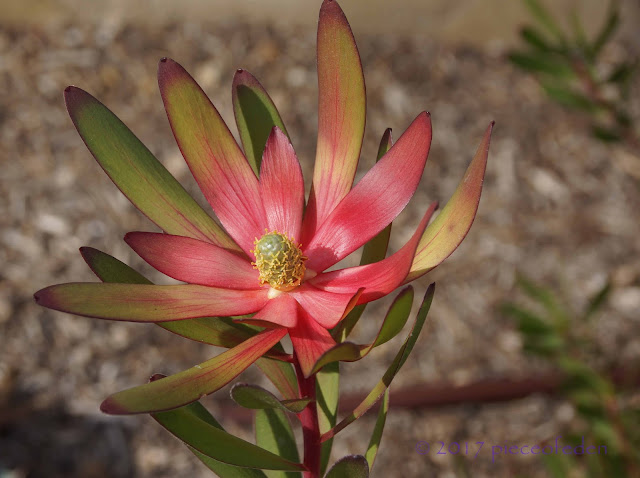 Lots of flowers open now on the white Aloe ferox.  Bees were happy. 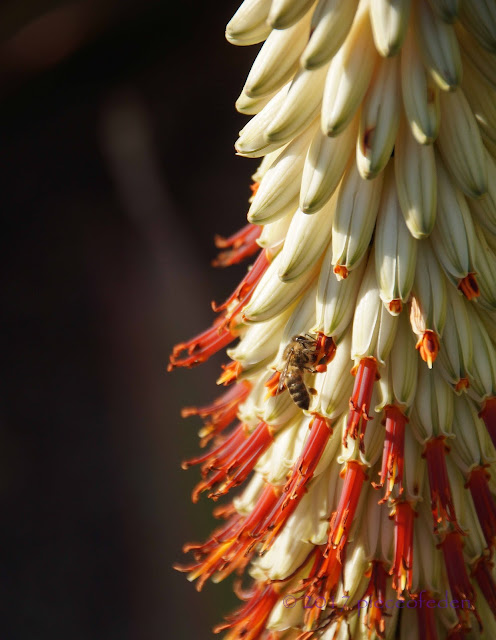 The recent rain brought forth a Sprekelia flower. 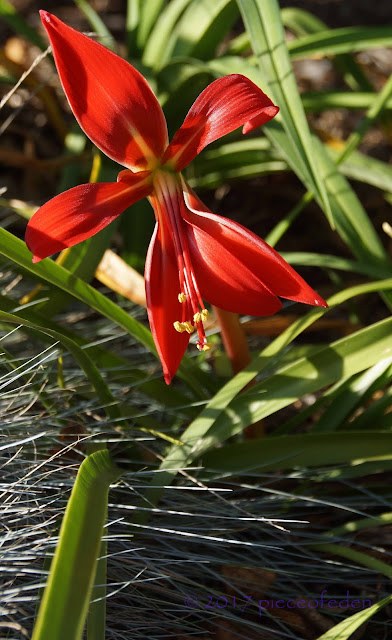 Eremophila hygrophana 'Blue Bells' flowers remind me of Penstemons, which have (in this garden) an unbroken string of dying almost immediately after planting.  Eremophilas are growing and blooming.  The heck with Penstemons! 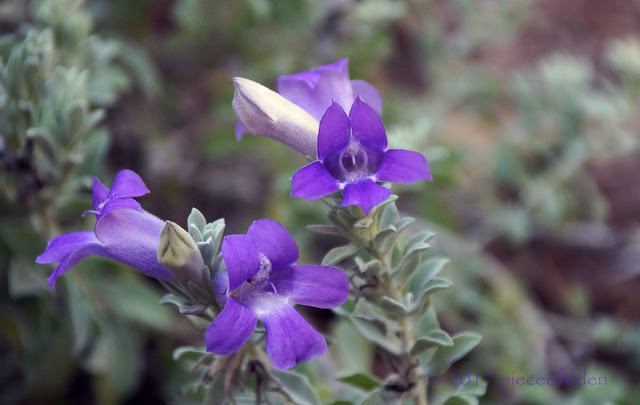 Another flower from 'The Prince' opens as the old one falls apart.  Delicious plummy color. 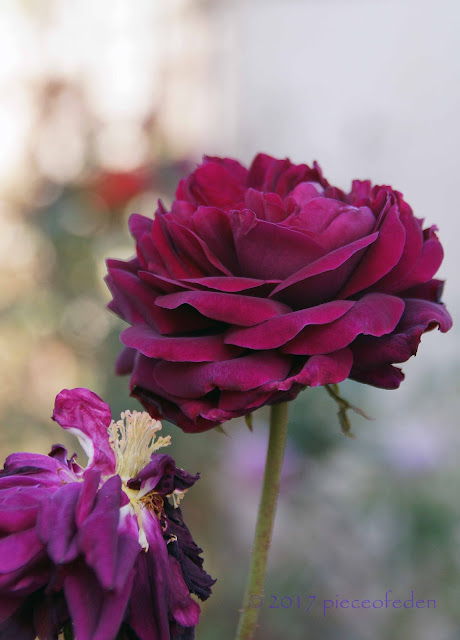 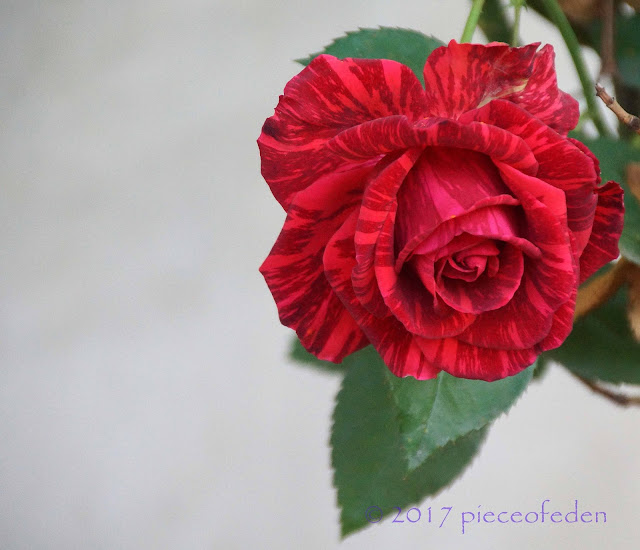 'Belinda's Dream' is excellent in a dry winter here. 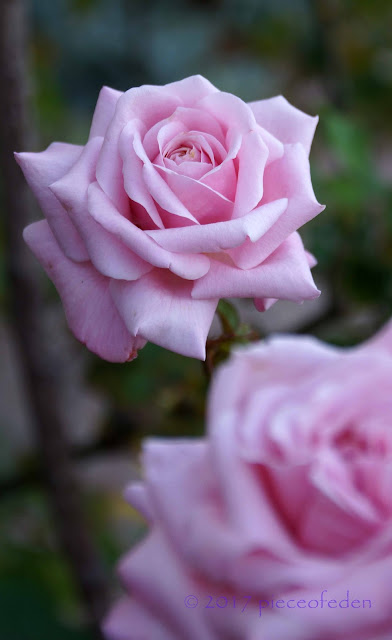 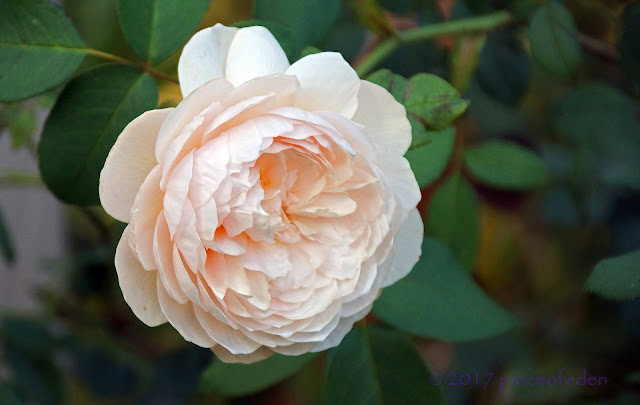 Another gorgeous day in January.  Might as well enjoy.
Let's Complain About The Weather! Roses