A Visit To The Coastkeeper's Garden 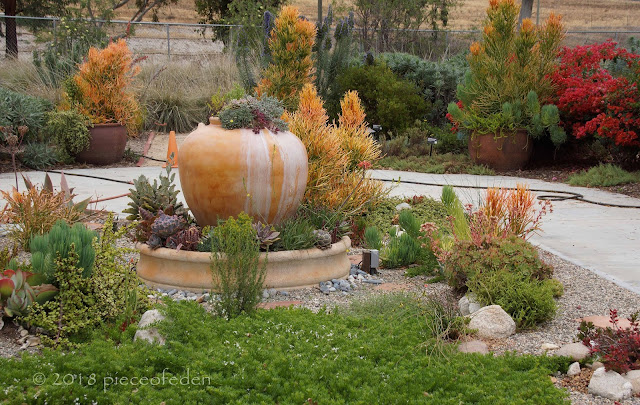 Recently I visited the Coastkeeper's Garden in Orange County, which is attached to Santiago Canyon College, a public community college in Orange.  Access to the parking lot for the garden was somewhat difficult to find.  The website directions are unclear, and the Google Map didn't show it.  We blundered around and found it, a small entrance to a gravel drive indicated by a small sign.  The place to access it is here it is on Google Earth View (not on the regular map, for some reason), indicated by the red arrow: 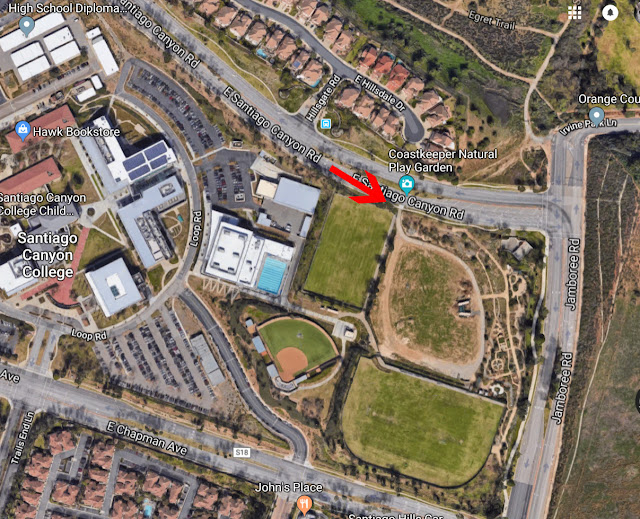 The image above also shows the garden's paths there along Jamboree Road.   Admission is free and parking is free.  The garden is open Wednesday to Saturday from 9am to 4pm.

Coastkeepers is a non-profit that focuses on clean water and water management;  the garden intends to encourage climate-appropriate plantings and prevent urban runoff that pollutes the ocean and groundwater.

The professionally designed garden was opened a few years ago.  I never got around to visiting when it opened, but it was probably better to wait because the plants have had time to grow.  Some of the trees are large enough to provide a little shade--given a few years, when they are more mature, the ambiance they provide will be pleasing.
Oaks and Sycamores to be eventually glorious, unless the Polyphagus shothole borer gets them.  Myoporum parvifolium from Australia is the groundcover in the foreground, looking thirsty due to our scanty winter rains: 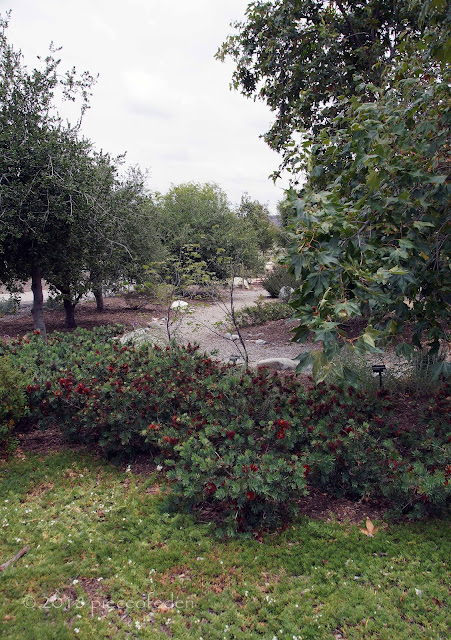 We happened to visit on a deliciously gloomy day, making our stroll very comfortable.  The garden is not open on very hot, windy, or rainy days.

The garden contains many California, Mexican, South African, and Mediterranean plants, tending to the shrubby rather than architectural (Agaves!).
More of these, except make them ovatifolia 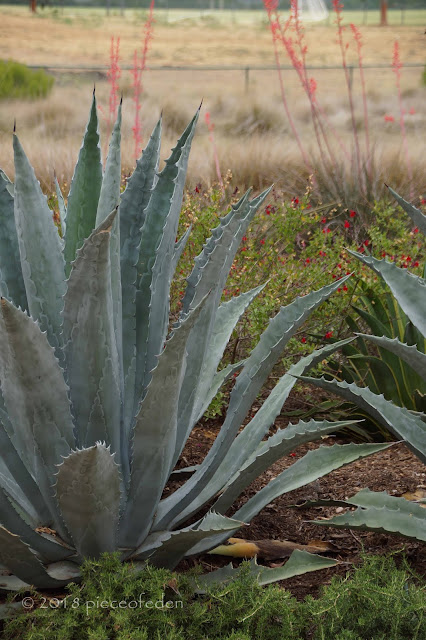 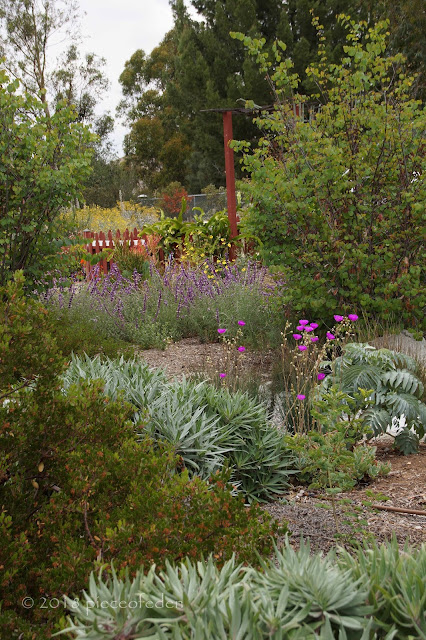 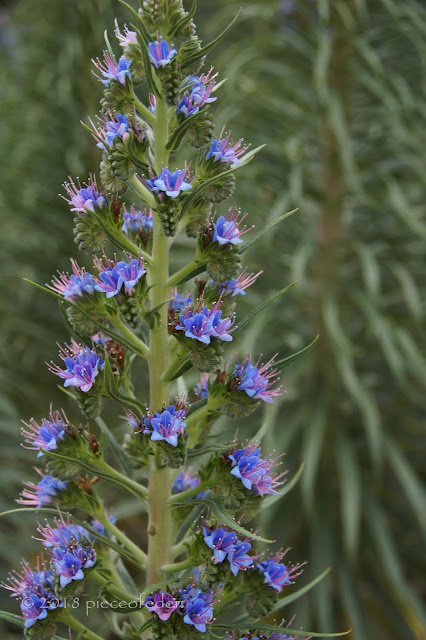 There was a lot of Echium cadidans. 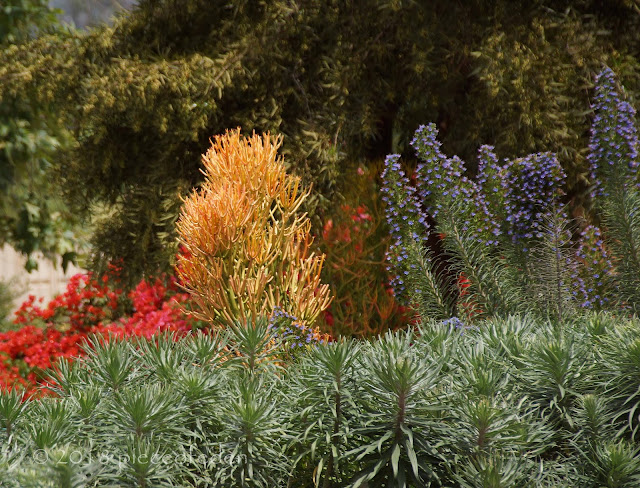 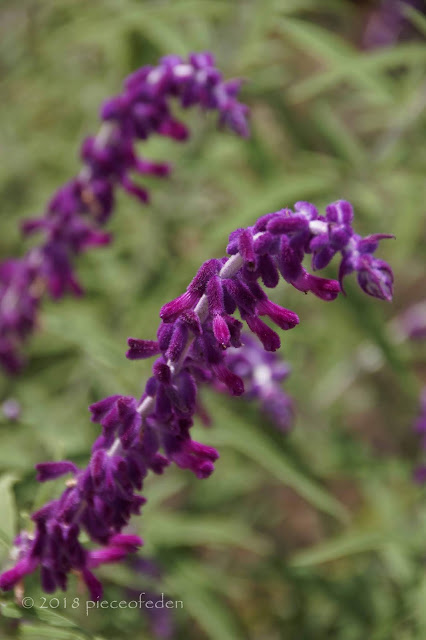 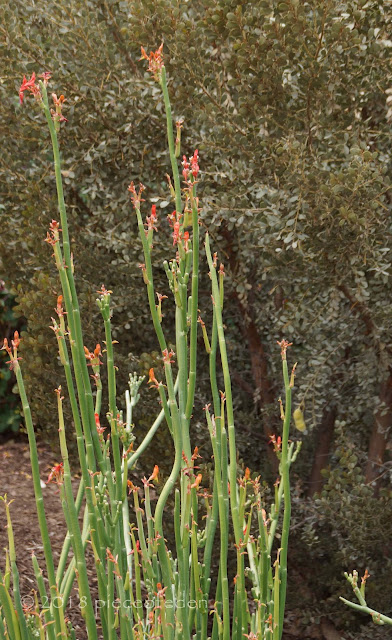 This is the existing landscape across the road from the garden.  It will soon be covered with hundreds of houses.  This area was quite rural--cattle country--until the development explosion of the 1960's-70's.  Development has been slowly approaching ever since.
Much of the Los Angeles basin (which includes most of Orange County) was grassland and Coastal Sage Scrub, with pockets of oaks and other trees in areas favorable to them. 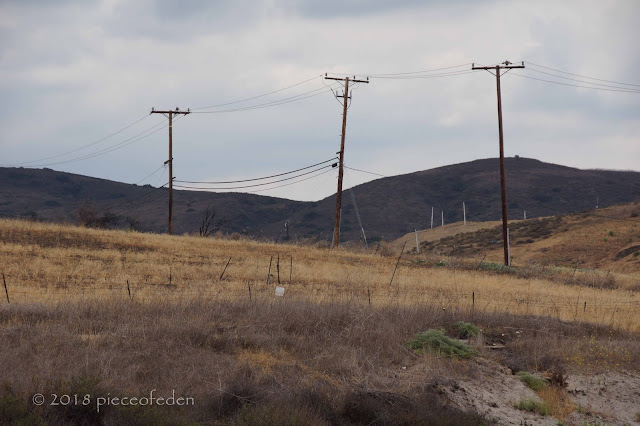 The Garden may eventually fall victim to College expansion, though it is small enough, and being located adjacent to a major road, it may be spared as a buffer to traffic noise.
Fremontodendron 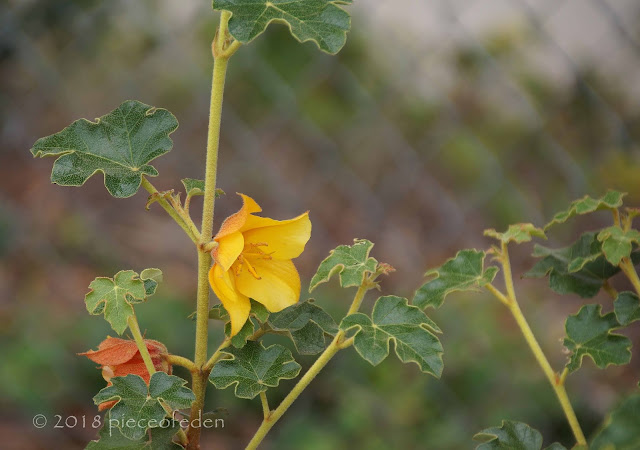 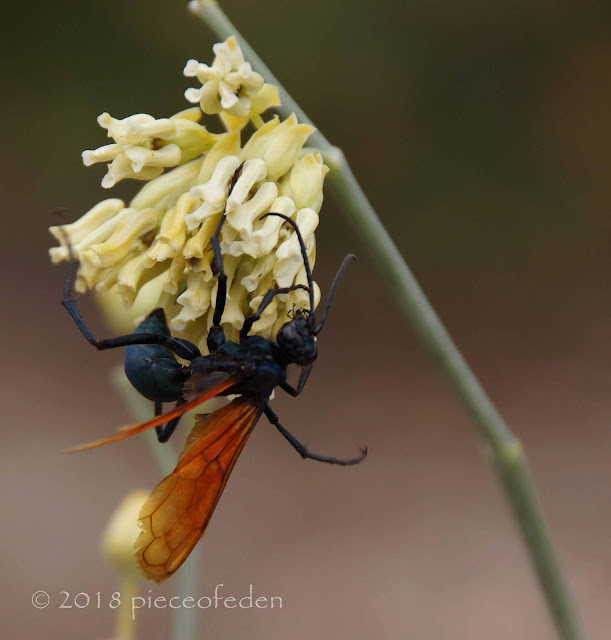 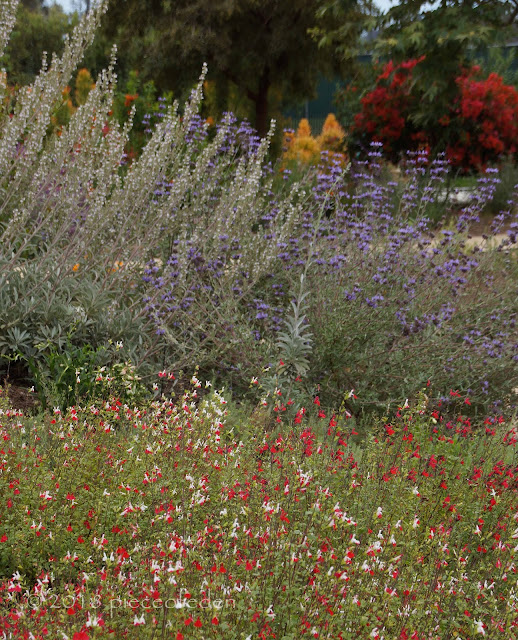 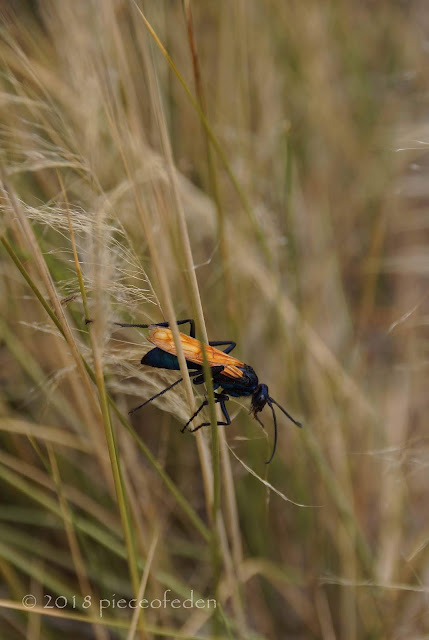 The garden is being maintained fairly well.  On a quiet weekday we had the place to ourselves except for a groundskeeper working near the entrance and a lone dog walker. 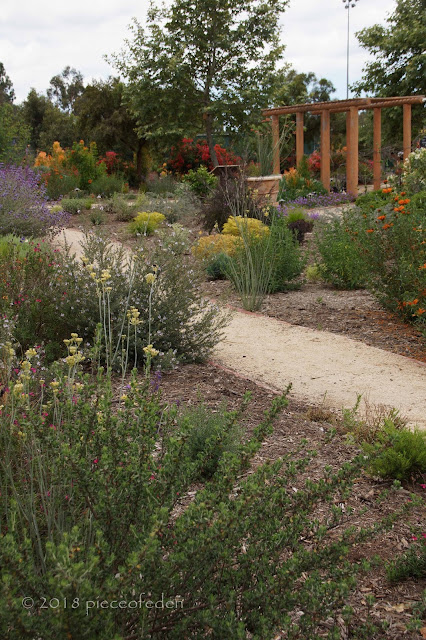 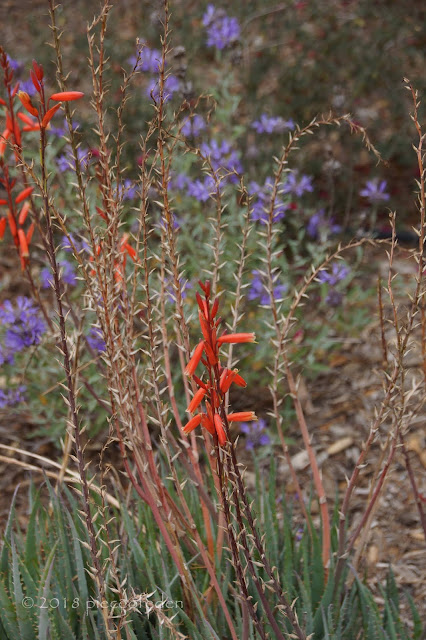 Lots of Penstemons, which I've had no luck with.  Hesperaloe has appeared in a big way lately.  It was so plentiful in Austin and I see it more and more everywhere here the past year or so. 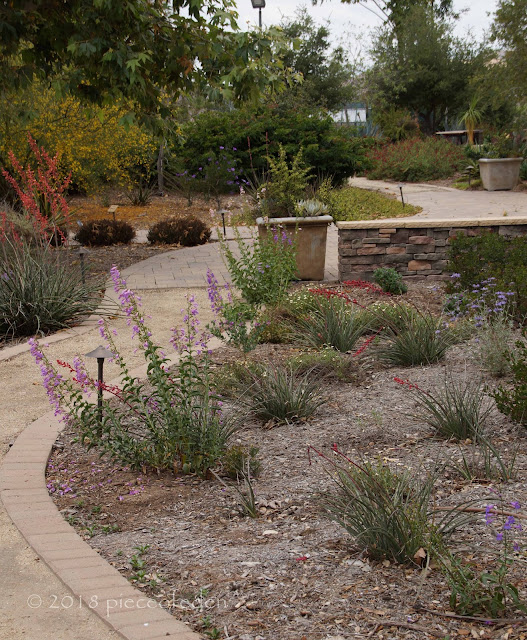 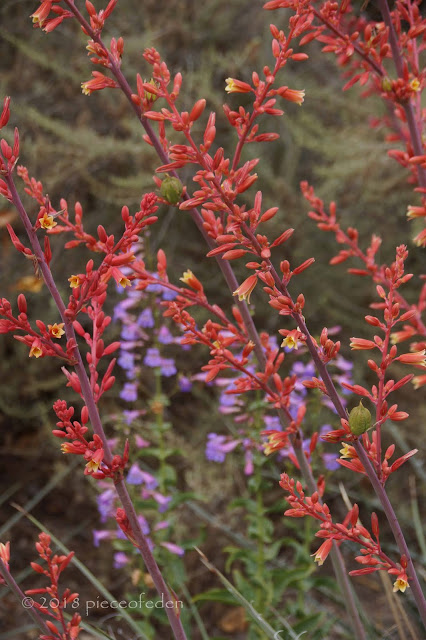 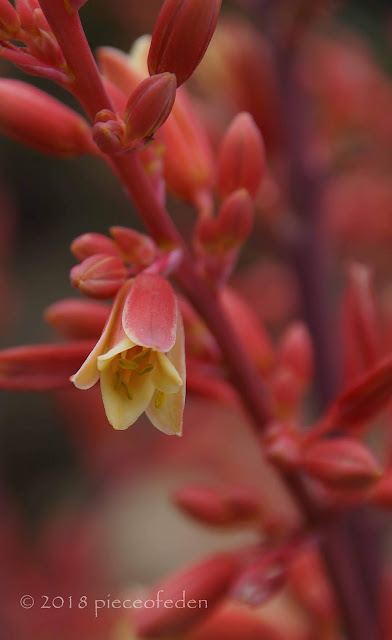 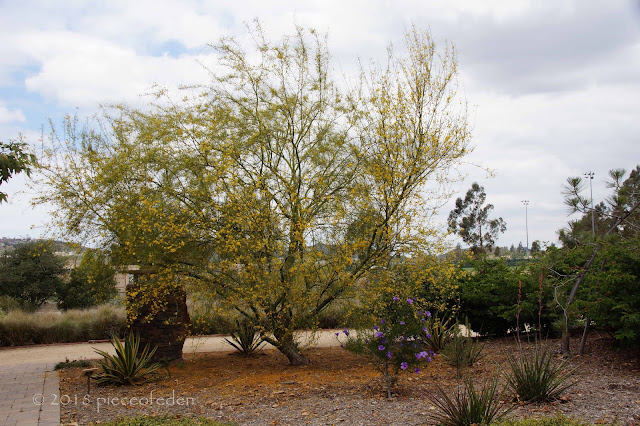 There are a few native oaks, too.   Senecio mandraliscae, Salvia greggi and Callistemon 'Little John' in the foreground 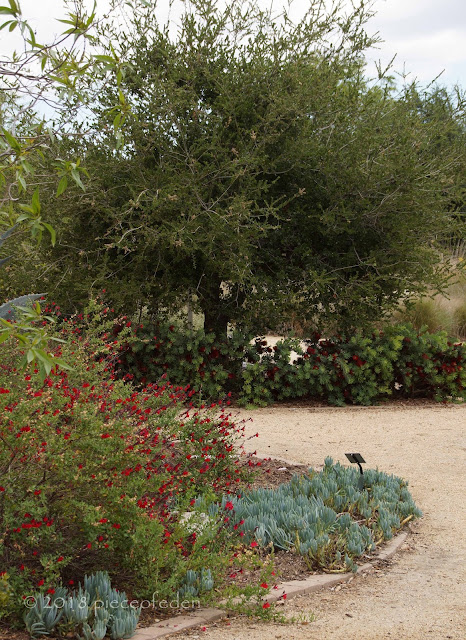 A few Agaves--this blue monster had room to be a monster.  Rosemary in the foreground, not yet old enough to be all woody and full of brown dried out patches. 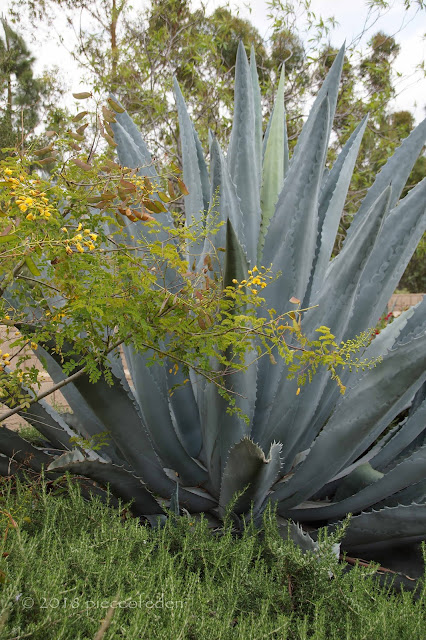 Adding a few Aloidendron (for example), as one area at the Huntington has, would punctuate the mass of Muhlenbergia with a touch of drama. 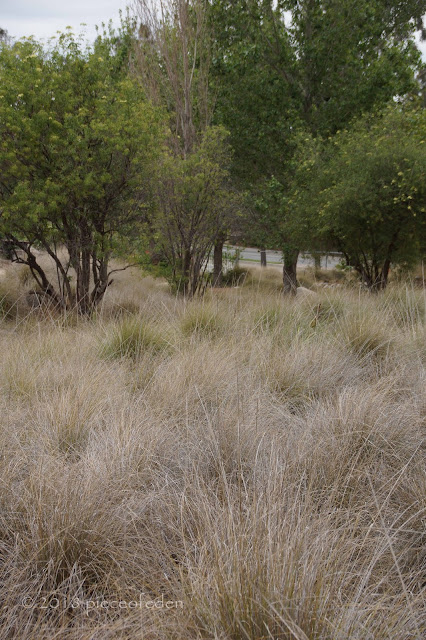 One could see some changes since the origin--by photos found on line this was a water fountain, which would have been great for attracting birds.  Perhaps maintenance was a problem,  raccoons were a problem, or they got complaints about having a water fountain during the drought.  We have discovered the bird-attracting qualities of a fountain at home, so I'm pro-water here.

Looks nice, but supporting local bird life is not a waste of water: 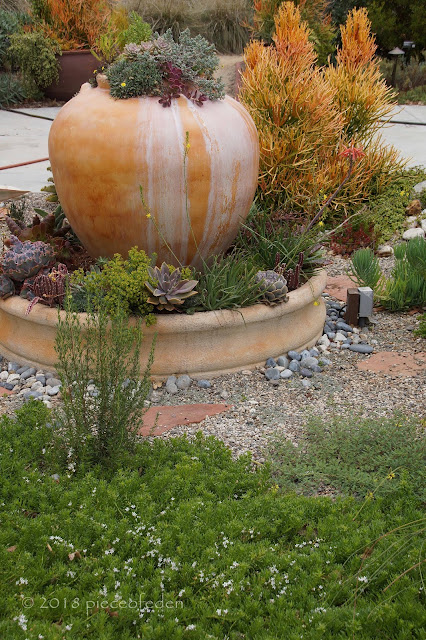 Something died and left that dark-foliaged Leptospermum all alone.  What was it? 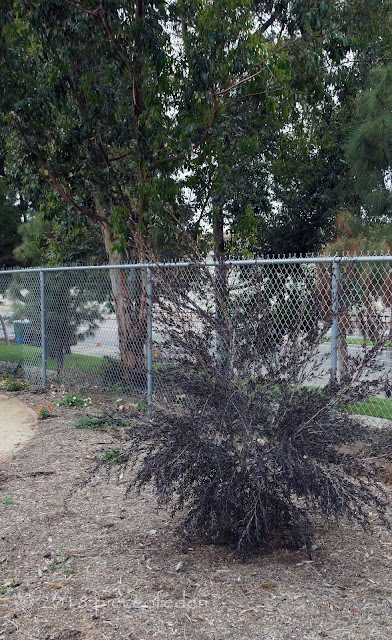 Ditto for this Eremophila 'Grey Horizon', which I recognized because I have it in the Proteana section of the garden at home.  A tough, beautiful plant so far.  From Australia. 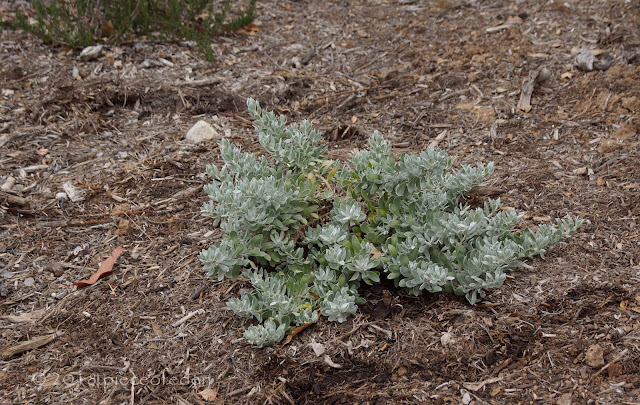 There was some areas of hardscape to give homeowners ideas for getting rid of their damn lawns already and being more climate appropriate--patio spaces and low walls.  A formal area with a pergola, focusing the eye on a citrus tree.

Got to have a Citrus.  This is Orange County, after all. 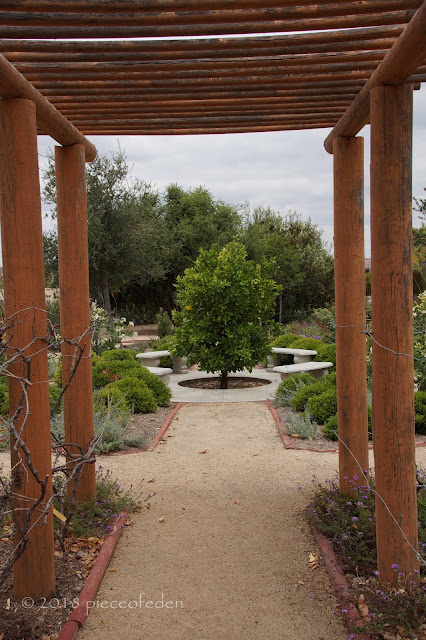 Surprisingly nice place to wander for an hour or so.  We enjoyed our visit. 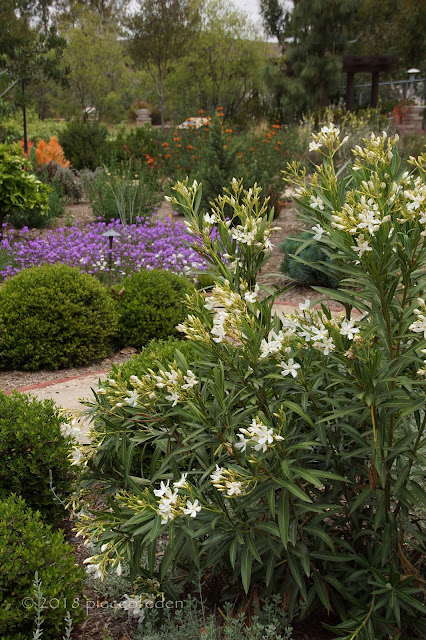