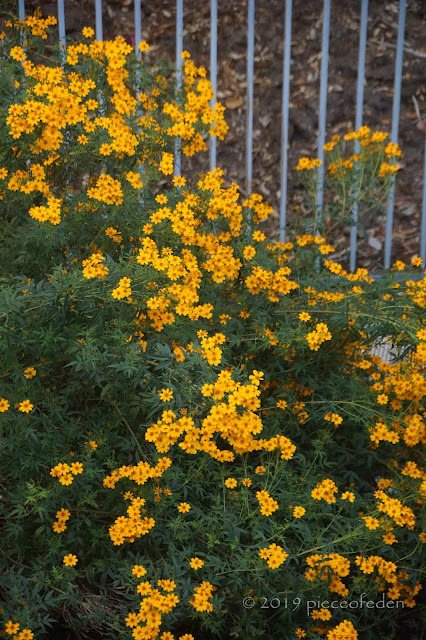 Computer finally repaired, in time for a Bloom Day post.

The star of the month is Tagetes lemonii, which comes into flower when daylight hours shorten.  Interesting that it will also flower during extended periods of overcast weather--in our area, those are May Grey/June Gloom conditions.  The saturated gold is a great color for November. 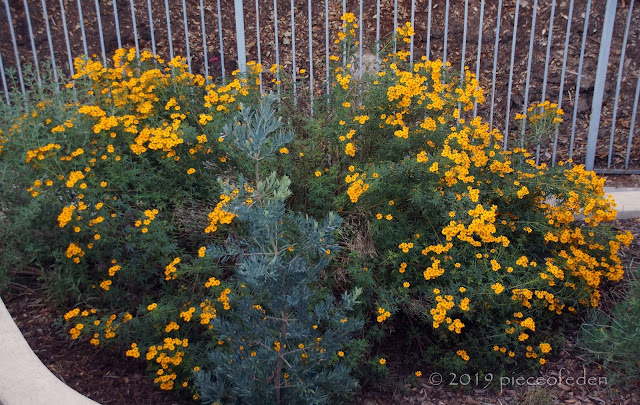 It's been autumn clean up time in the garden.  Piles of material separated:  some to green waste if woody or diseased or if there are seeds or spines/prickles/thorns; the remainder to become compost.
Sorted, just like the laundry 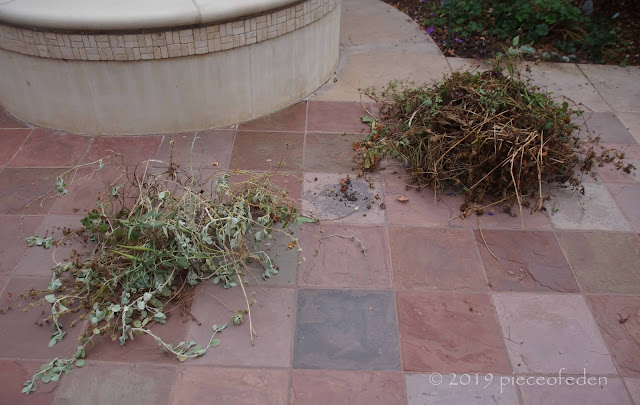 Got some sweet peas planted where the pole beans were this summer.  Six packs this year instead of seeds.  Last year almost all the sprouted seeds got pulled out of the ground, apparently by birds. 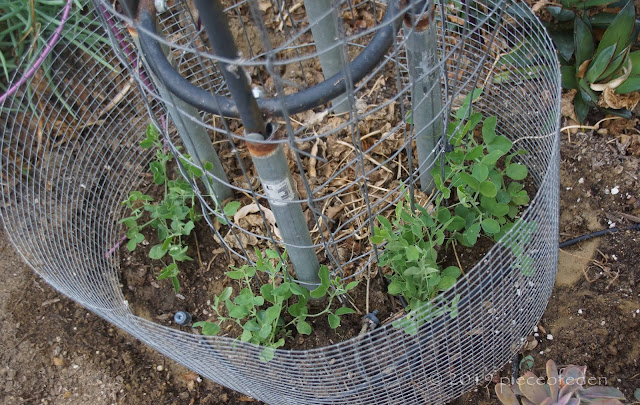 As to blooms, Aloes are often the stars of October and November, but they are late this year.  Flower stalks are just starting to emerge.  The only species in flower just now is Aloe suprafoliata, which is just starting: 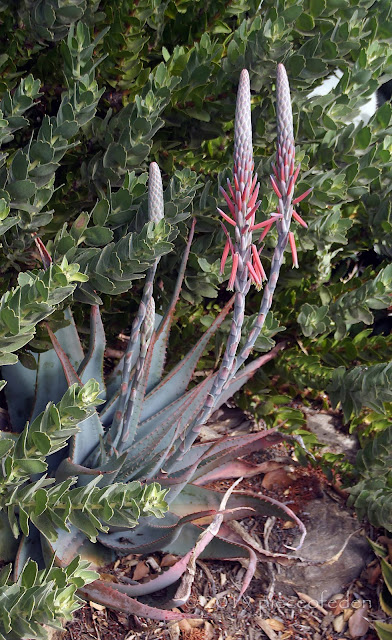 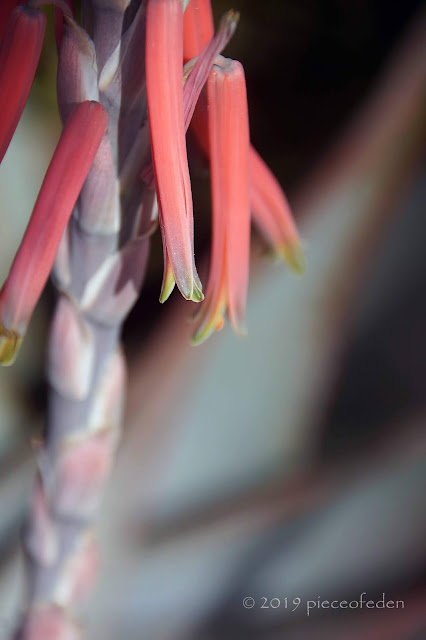 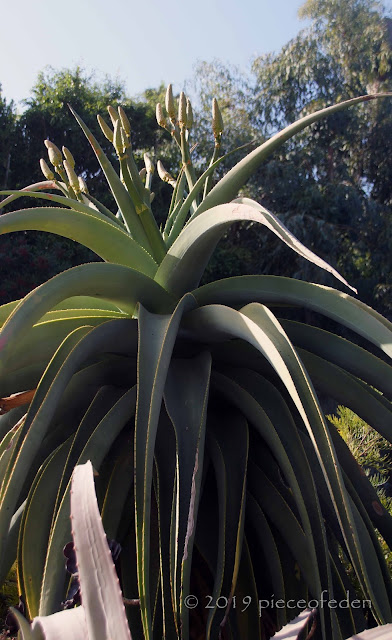 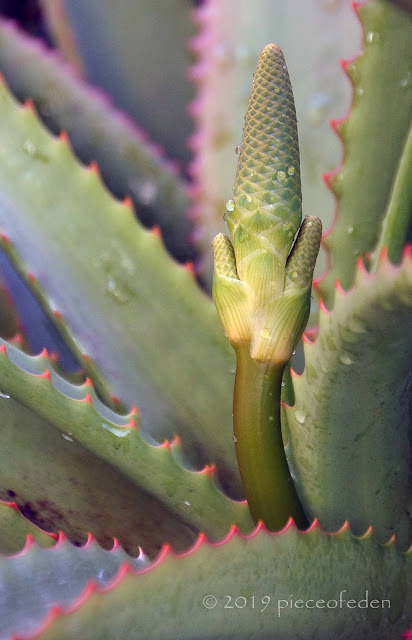 Aloe tweediae hybrid is being swallowed up by Leucospermum 'Yellow Bird', but managed to send up a tall flower stalk like a submarine's periscope.  There's a big Agave ovatifolia barely visible at the top of the photo also being swallowed up. 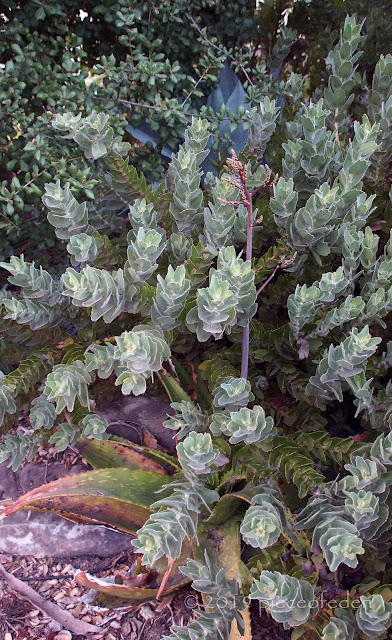 The oldest Aloe ferox is going to do better now that the mosterous Agave marmorata is no longer pressing on it. 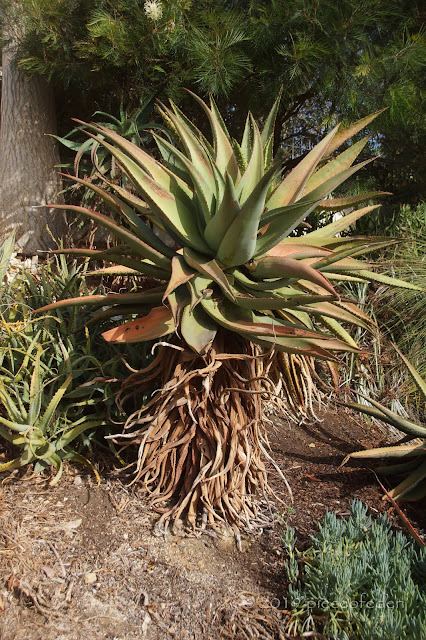 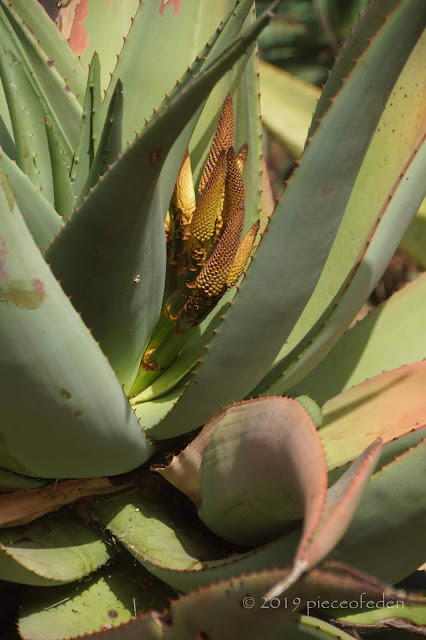 Aloe rubroviolacea has grown big and bold, making the white-flowered ferox to its upper right look wimpy by comparison. 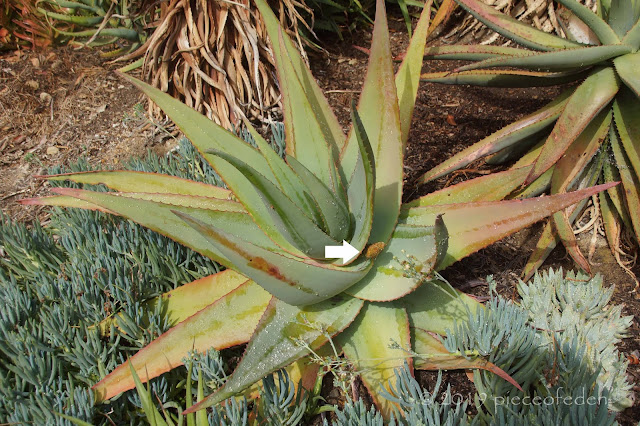 Aloe 'Moonglow' blooms soon, finally!  Happy, happy.  This plant was about to bloom two years ago, when someone came along and kicked the rosette off its stem.  I rooted the rosette and now it is finally going to have its chance to flower.  The stem has produced a cluster of rosettes as yet too small to flower. 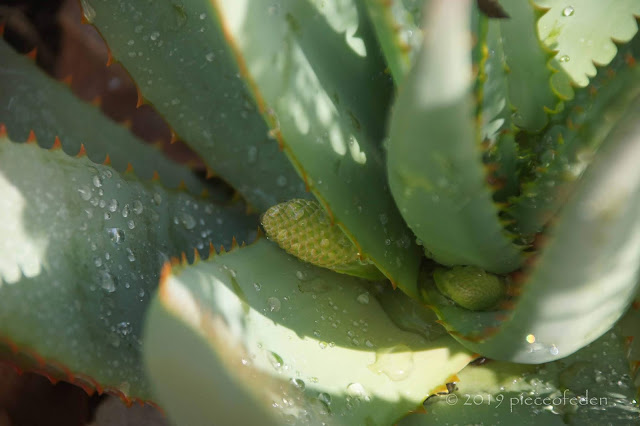 Besides the constant bloomers like Grevillea 'Superb', Iochroma, Geranium 'Rozanne', and Aloe 'Rooikappe' there is scattered bloom on roses, daylilys, and a clematis. 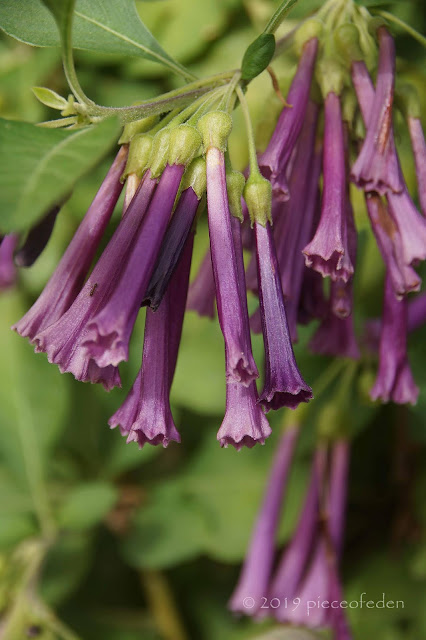 On ragged tall plants awaiting a winter prune, amidst ragged, insect chewed, sunburnt foliage, is here and there a beautiful rose. 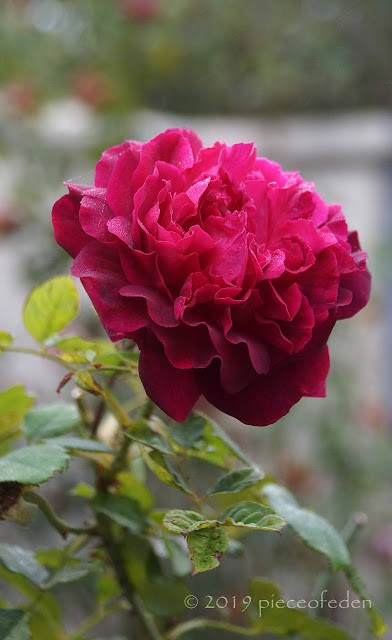 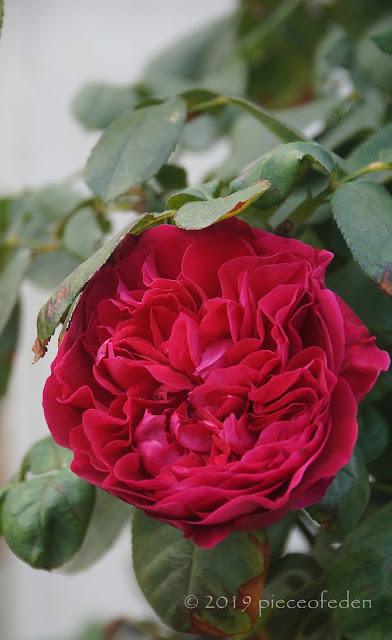 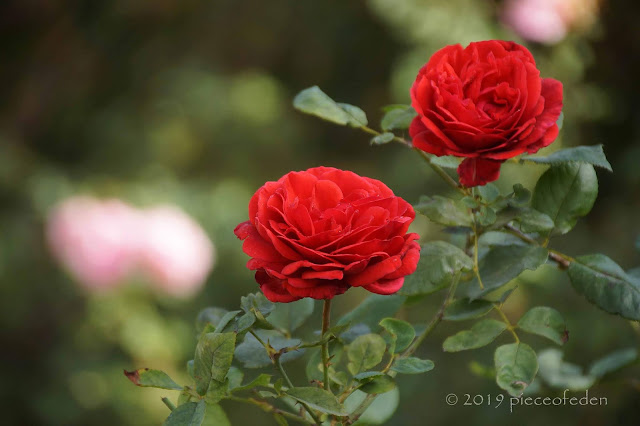 Surprise:  Flowers on Fatsia 'Spider Web'.  The "webs" still are not very prevalent.  Touches of red foliage from an Acer palmatum. 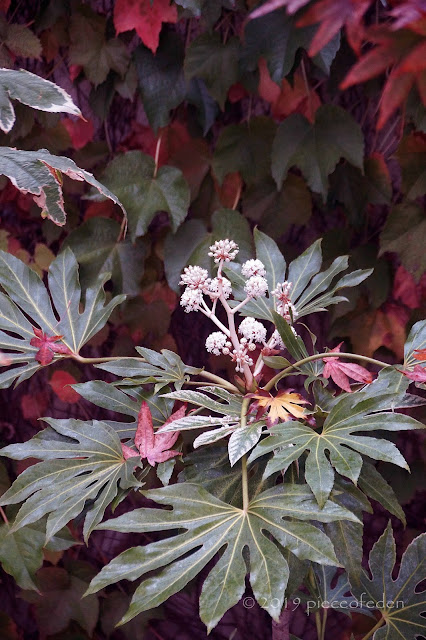 Late in the year for so many daylily flowers.  There are usually a few, but this year there are more than usual.
'Elizabeth Salter' 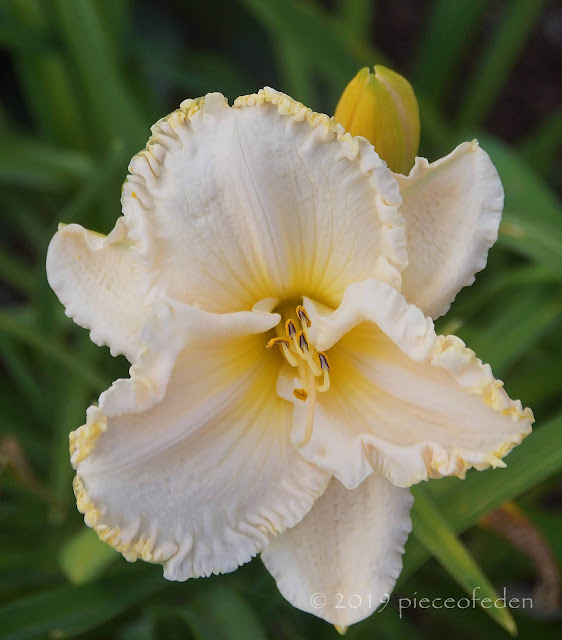 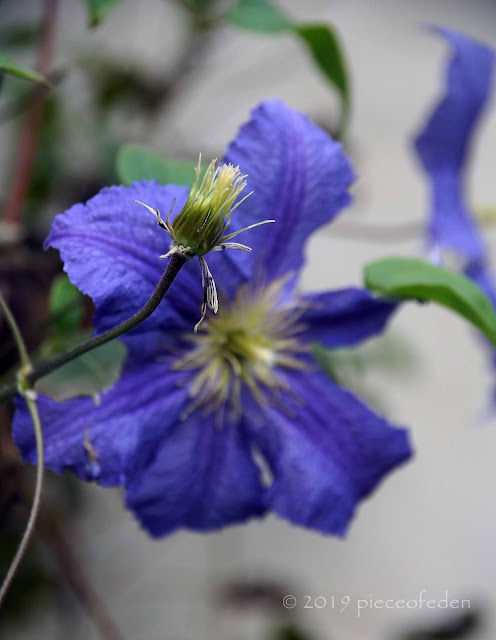 Salvia 'Blue Hill' finishing up, but 'Love and Wishes' will flower all winter. 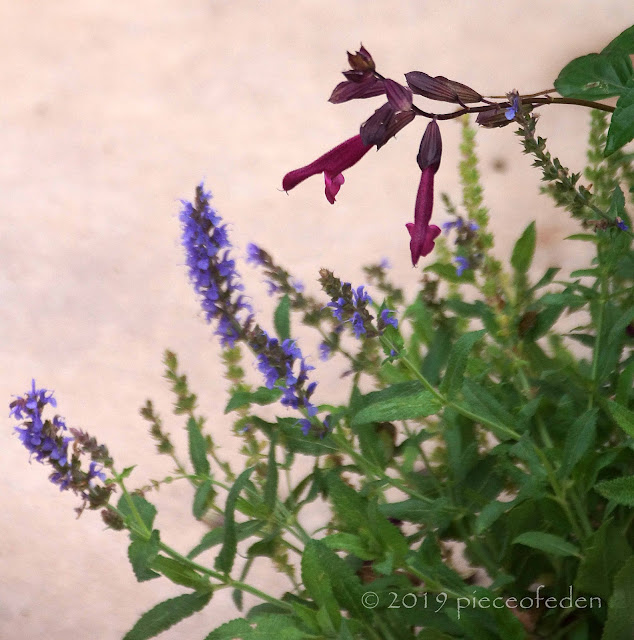 Agave 'Joe Hoak' already blooming only four years from an offset.  Lots of Agave blooms this year.  'Joe's usual behavior is to slow down for the winter and actually open its flowers next spring. 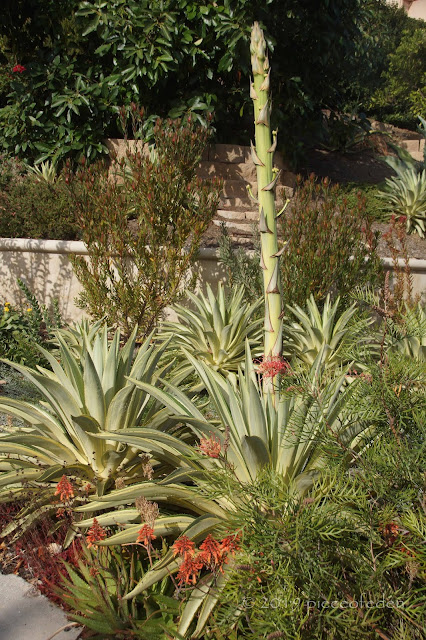 To end, the faded but still fine Hydrangea 'Endless Summer' makes a nice pairing with a purple foliaged Alternathera. 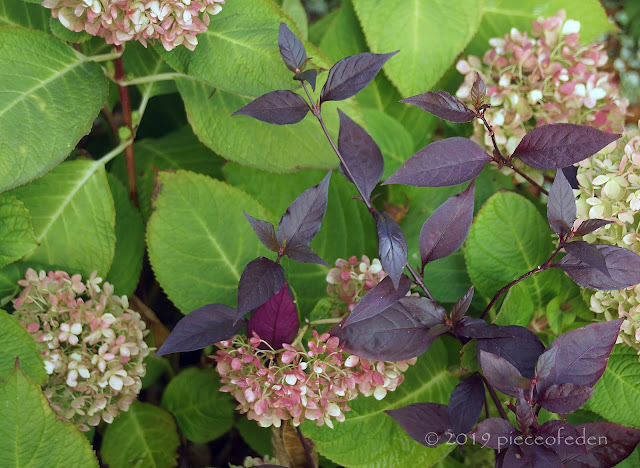 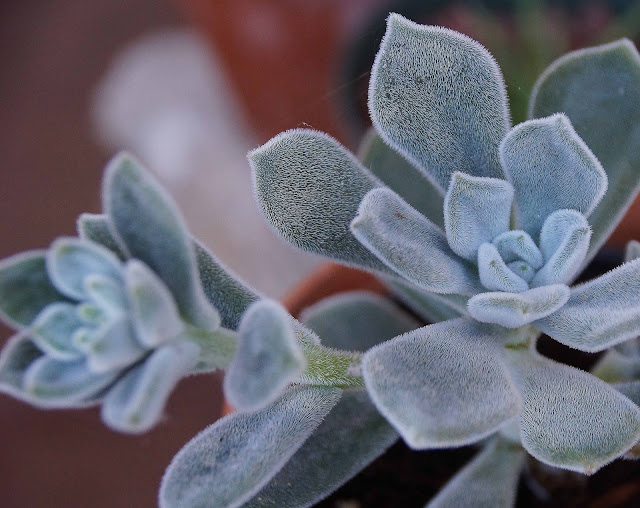