Gardening is Not Work If You Do It Right 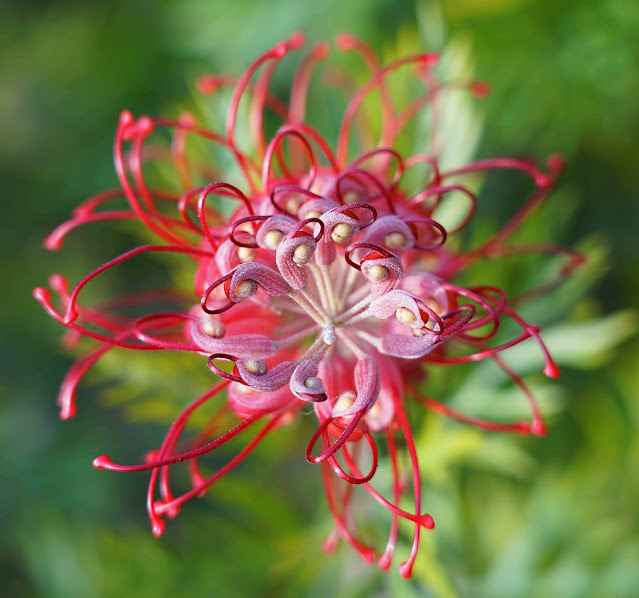 Five bloomed-out 'Blue Glow' Agaves to remove.  Chopping off the leaves first makes it easier to dig out the remainder.  Chopped, dug, they are still heavy.  The longer they are left, the drier and thus easier to move.

First one is not dry enough: 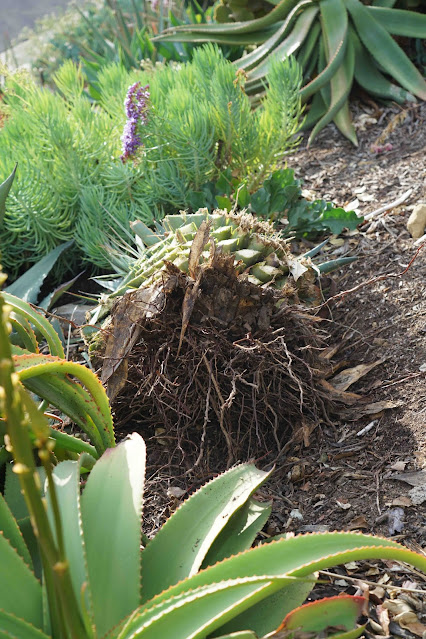 The other four up the slope.  One gone.  Its placement on the slope made it possible to roll it out, despite its weight.   One chopped, dug & drying.  One chopped.   The last still untouched. 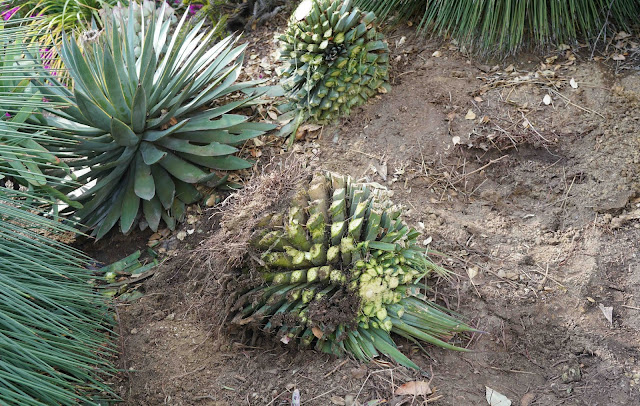 Not to mourn.  Plenty of new plantlets growing and awaiting a home, plus multiple other 'Blue Glow's elsewhere in the garden.  Agaves don't die.  They regenerate.

The big garden lesson painfully learned:  plant Agaves only where they will be easy to remove.  These 'Blue Glow's will be replaced by Aloes.

Pause to watch a hummingbird.

Fluffed up and drowsy: 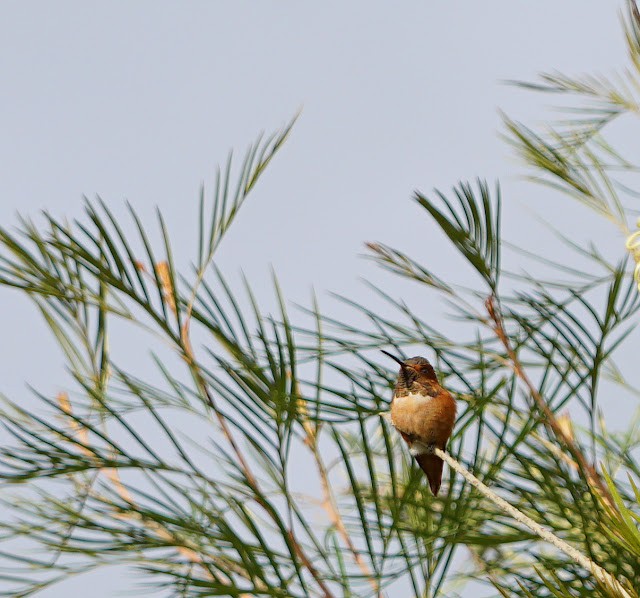 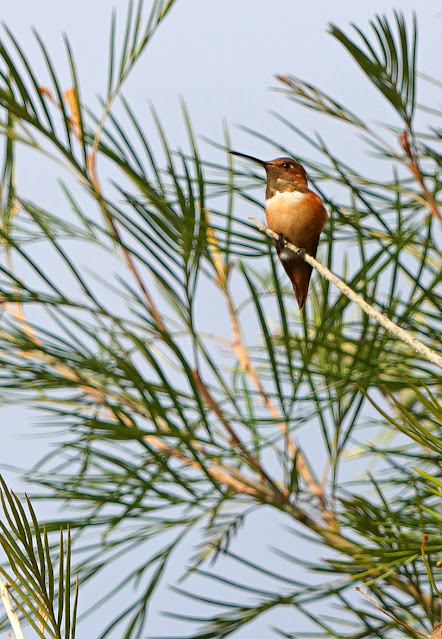 What task next?  Dig.  Move Arctostaphylos bakeri 'Louis Edmunds', there on the right in the photo... 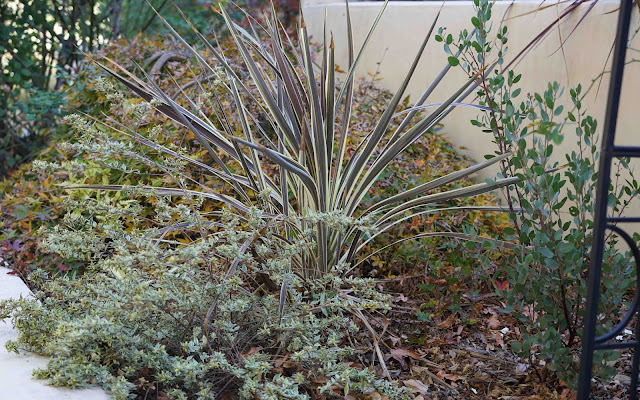 ...to the spot marked in white.  Dug out the 'Grandmother's Hat' rose purchased only last spring, having decided a rampant, sprawling, suckering rose would be difficult for me to care for in that spot (or, honestly, in any spot).  'Louis' is an upright grower.  'Austin Griffiths', yet small but growing, can be seen on the right of the ridiculously happy boxwood.  Should I shearing the boxwood, for contrast?  Not now. 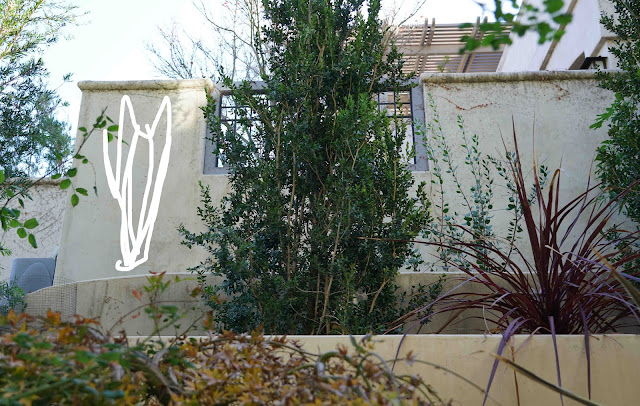 There you go, Looey.  Good luck! 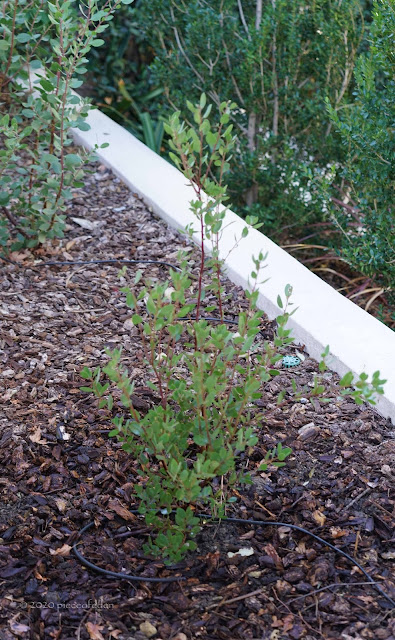 What's next?  Re-staked the Banksia prionotes with a taller stake, then gave it chelated iron/nitrogen, because it's very chlorotic.  One site notes B. prionotes can get 30' tall, which would be great--it would help screen out the house in back.  Just happy it is still alive.  None of the other Banksias (marginata, ericifolia, victoriae) survived. 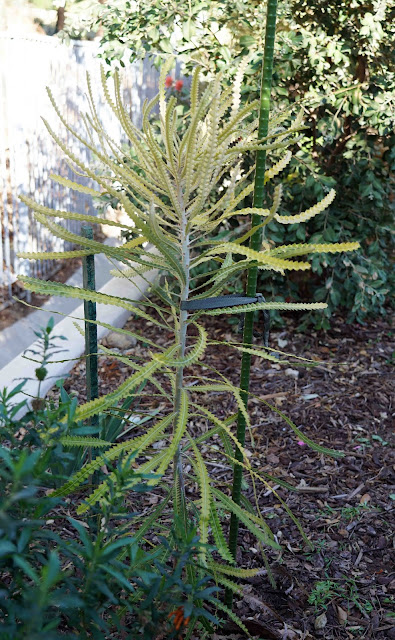 What does "prionotes" mean, anyway?  Pause for a lookup. Prionotes – (Greek) prion – a saw, and otes – denoting quality; referring to the saw-like leaves 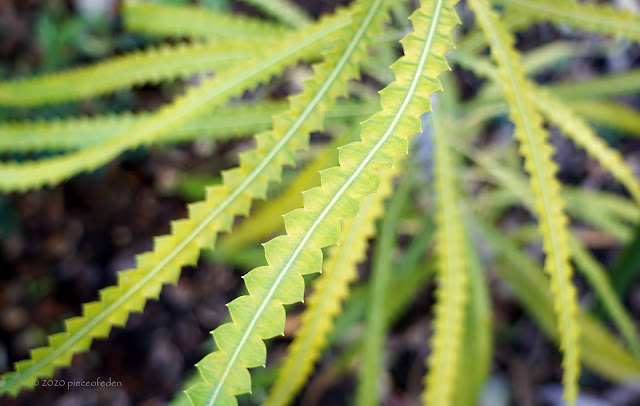 Pause while in the gully to admire bits of autumn-colored foliage. 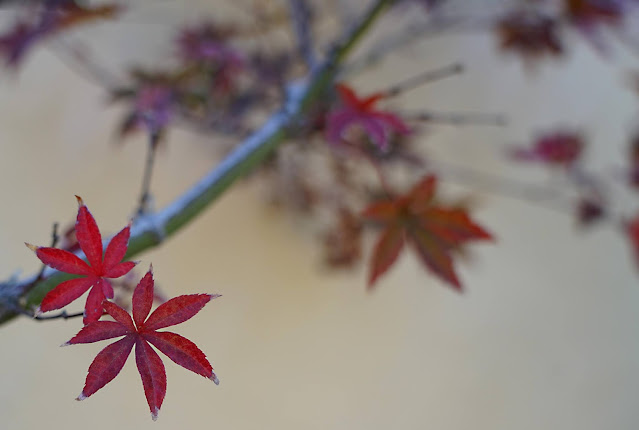 Best to re-tie the blue Podocarpus, taller and leaning just a bit. 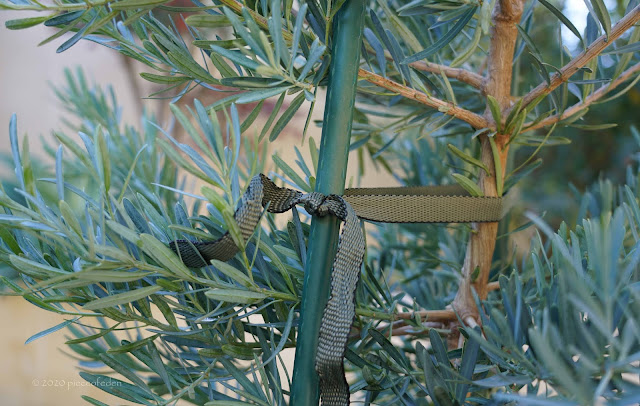 Must also pause, to adore 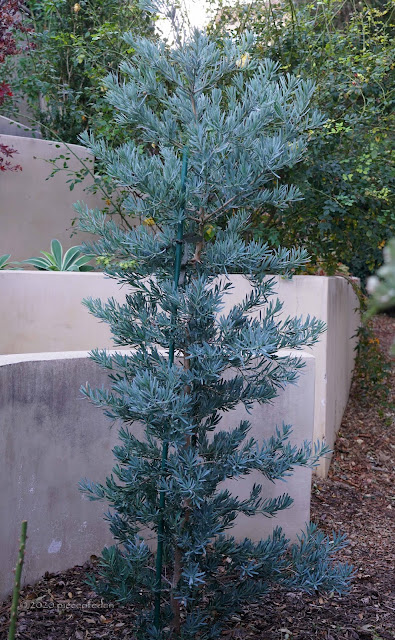 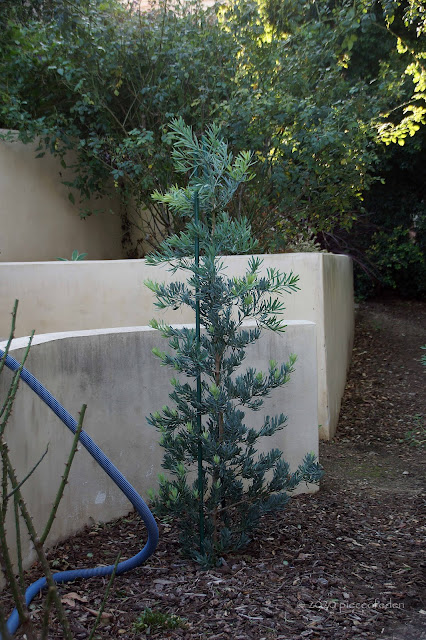 What's next?  Prune the pink HT roses near the Banksia.  Chop, chop: 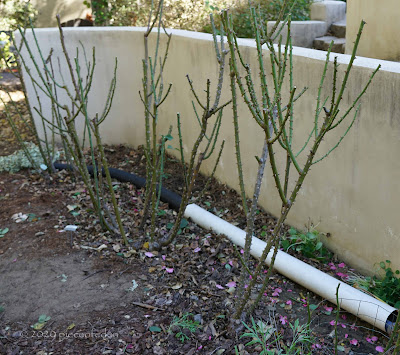 What's next?  Dig again.  Perhaps this empty place adjacent to another 'Austin Griffiths' would be good for the Magnolia laevifolia.  Did you know "laevifolia" means "smooth leaf"?

Some digging made it clear the last Cypress stump isn't ready to yield just yet.  I'll try again in a few months.  The Magnolia is only 10" tall.  There is time yet. 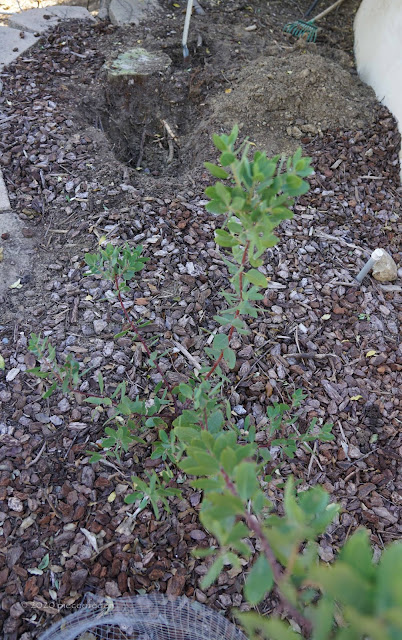 What else?  Clean the pond filters.  Oh nooooooo!  I broke a filter valve.  Panic.  Frantic. 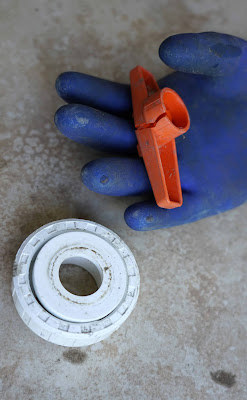 Think.  Work the problem.  I managed to fix it temporarily--the valve was okay.  Just the handle broke.  A pair of pliers shut the valve.  Now I need some plumbing bits to fix. 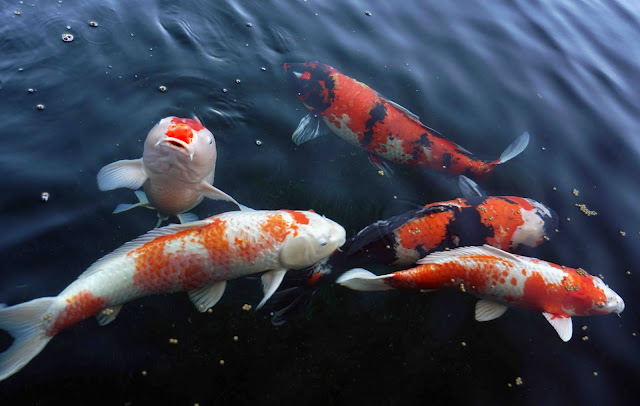 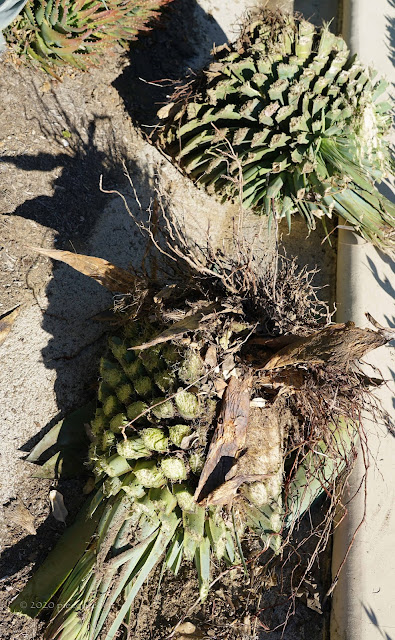 Garden work, the dig dig chop chop, isn't really work if you take pauses to enjoy the garden.  I'll remember the sleepy hummingbird, the beauty of the Podocarpus, and the grace of the Koi more than the digging, lopping, and dragging.  Gardening's not work if you do it right. 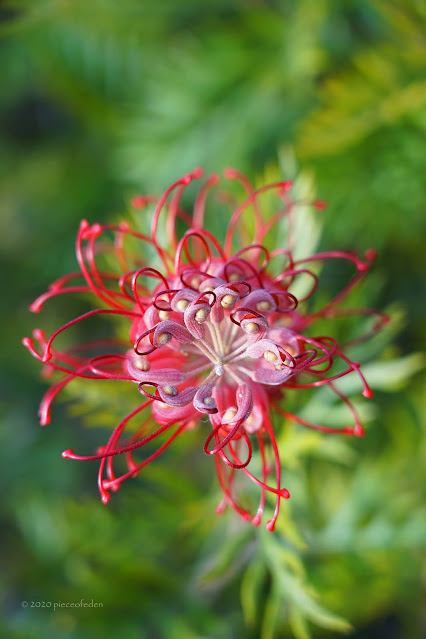