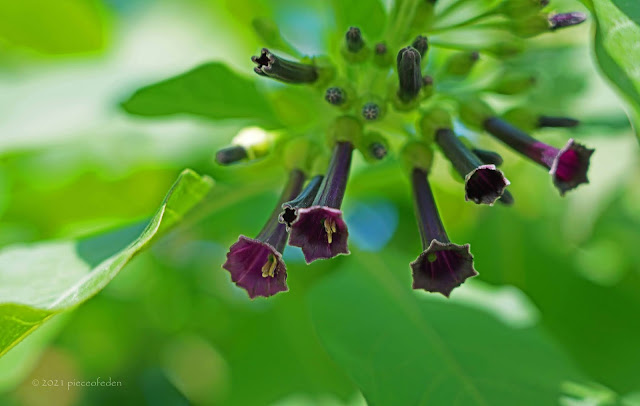 When rain is imminent, buckets, tubs and barrels are placed into position to collect precious water.  Moving work is frantic, so plants moved get a soaking in their new location and some cool overcast to help them make the transition.  I've been waiting, waiting waiting for rain so I could do this sort of work.  The past couple of days, it was time. 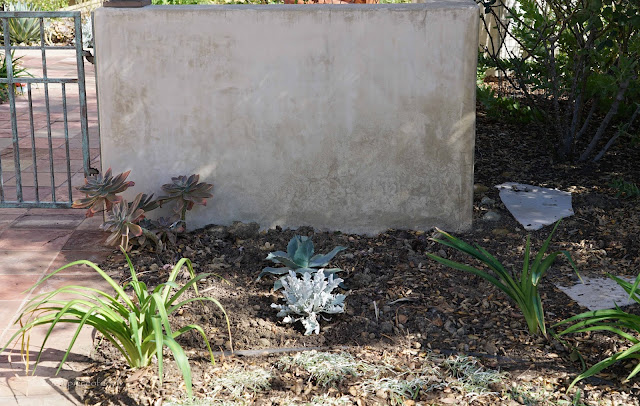 I chose A. ovatifolia in hopes it will look striking against the stucco wall behind it.  A mature ovatifolia under the Oak tree illustrates its elegance: 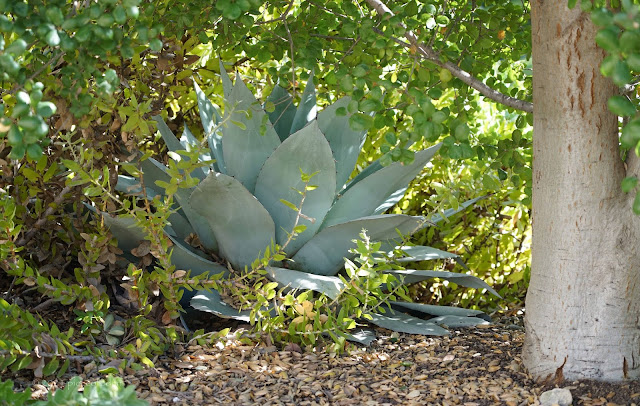 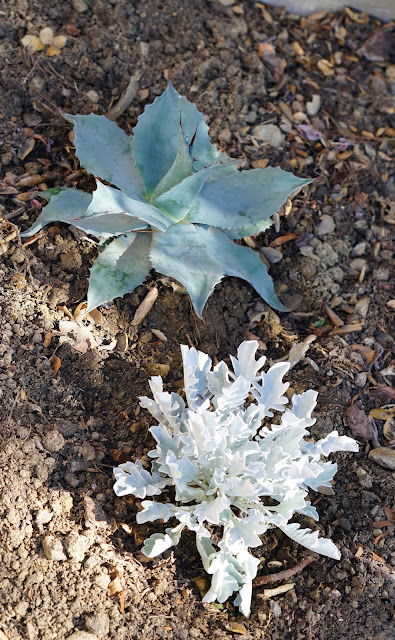 The Aloe vera (Aloe barbadensis var. chinensis) moved to this hot dry place adjacent to the street, where offsets can be easily removed.  A different Agave ovatifolia next to it was planted several months ago.  In all-day sun its muted grey-blue color turned a pure pale aqua.  I hope the newly planted one does the same. 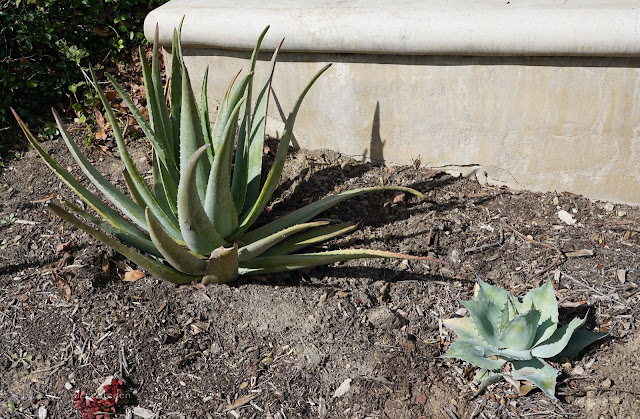 Another rose removed,  'Altissimo'.  Adored the flower, loathed the plant.  The roots had entwined with an irrigation pipe.  That needs to be fixed, but because of the rain the irrigation will be shut off for a while, so I have time. 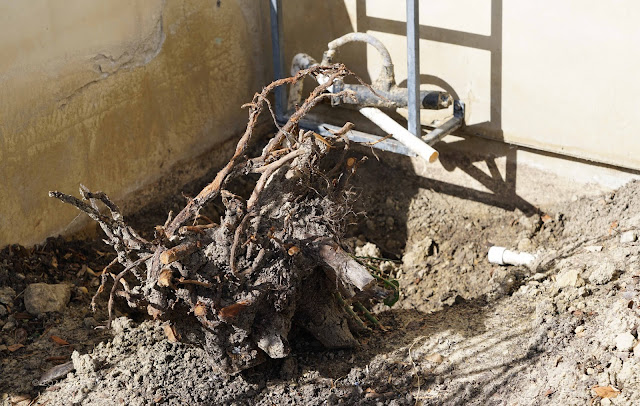 The replacement will likely be a small Crepe Myrtle, which I did not have time to move before darkness fell.

Was Not Happy with the Butterfly Amaryllis (Hippeastrum papilio) nearby.  Fabulous flowers, very short bloom season, but the bulb I'd planted just a couple of years ago had formed a massive chaotic clump.  Not Happy with it in such a prominent spot.  I'll try it in a pot that can be shoved somewhere inconspicuous when it is out of flower. 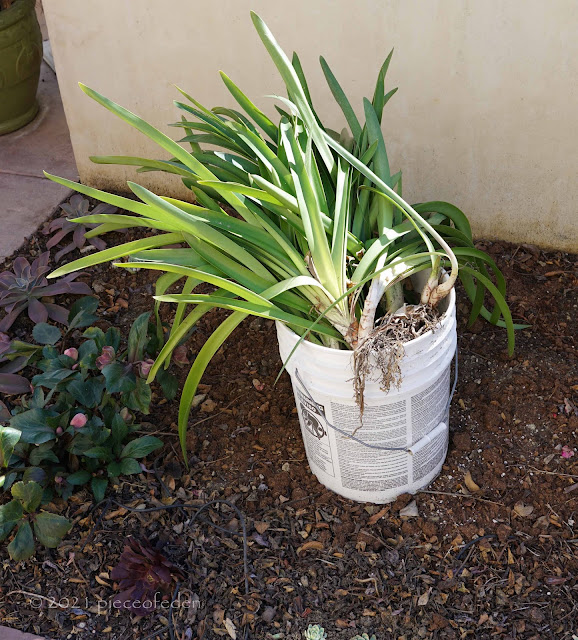 Agave stricta(?)'s life was complete.  One of my first Agave purchases back around 2008.  It popped out of the ground with only a couple of shovel-shoves--the root system was dried and gone.  The final diameter of the plant was 3' (1 meter) and the flower stem was a little over 9' (3 meters) tall.  I really like this solitary, non-bulbil producing Agave and would grow it again.   A. stricta and A. striata are somewhat hard to tell apart.  Mine was sold by a reliable, knowledgeable nursery (Yucca Do, now closed) and was labeled stricta nana. 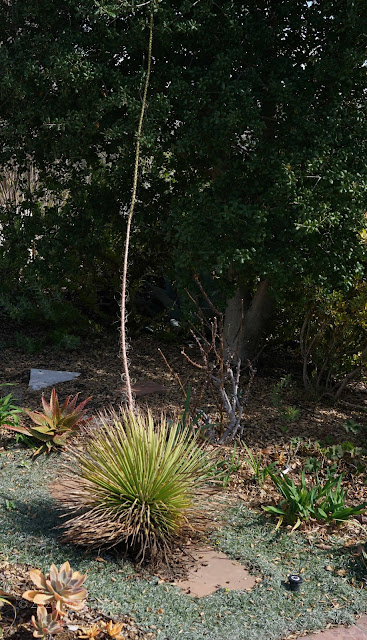 A 'Blue Glow' got stricta's spot.  I thought about pulling off an offset from the nearby A. titanota 'White Ice' to place there instead...but...'Blue Glow' was, I confess, easier. 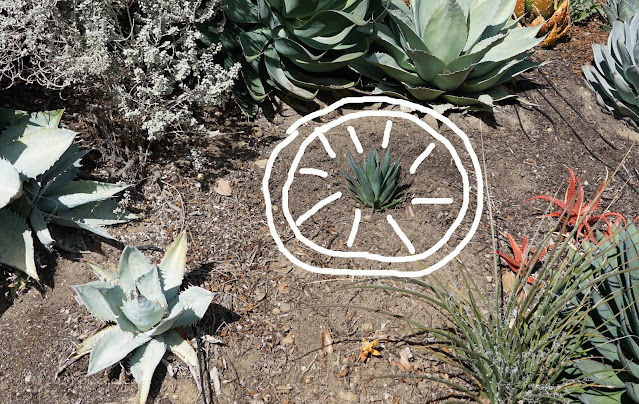 Oooh!  How'd I miss that?  Could that be a shipment of new plants? 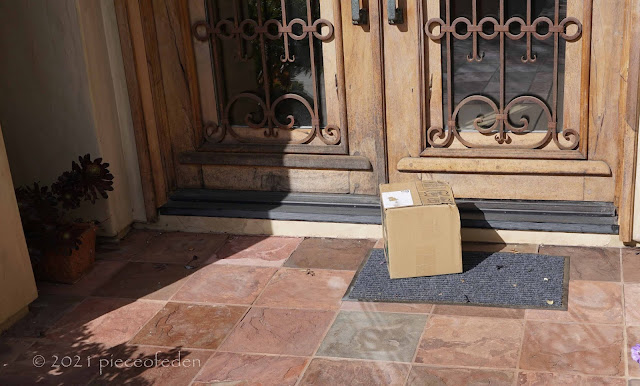 No missing this little ice plant, purchased about the same time as Agave stricta.  Flowers so bright it can probably be seen from space. 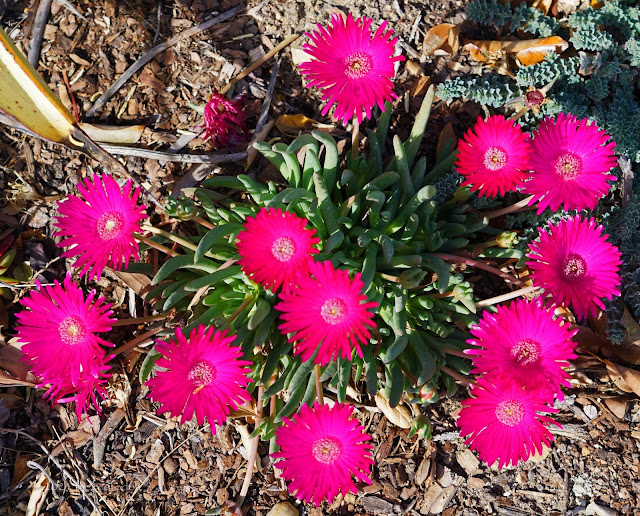 And a Leucandendron cone.  But enough distractions... 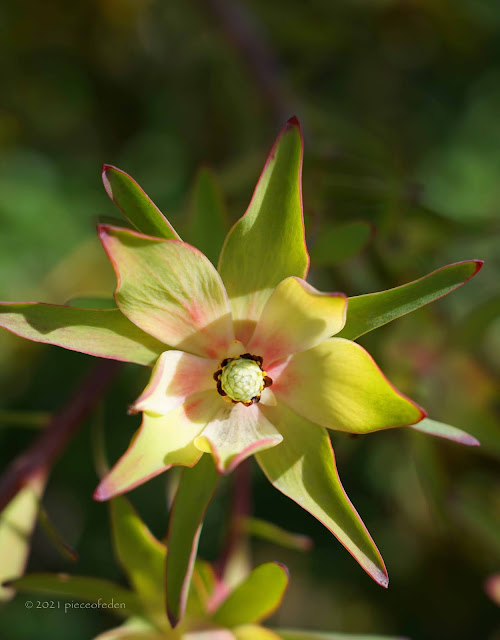 ...back to work.  I waited on moving this 'Endless Summer' hydrangea while it continued to flower.  As dormant as it was going to get, and with the rain coming, it was time.  Surprisingly tough to dig out.  There were some Acer roots extending into the Hydrangea root ball. 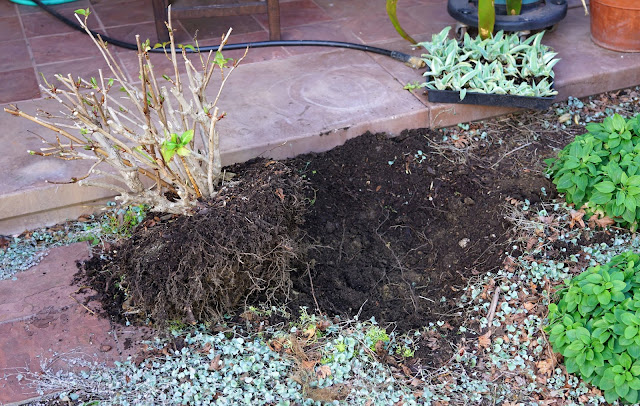 Its intended place was here, a formerly raised bed that once upon a time had been a nursery bed to root succulents.  Adjacent 'Cara Cara' orange's rapid growth quickly shaded the bed completely.  I took the bed apart and used some of the soil to fill in the hydrangea's hole. 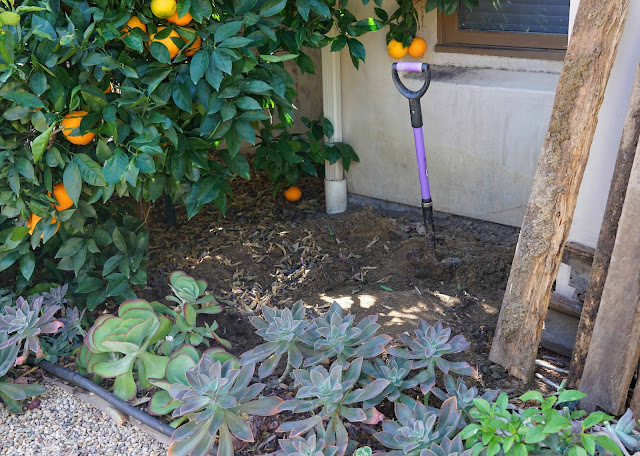 Ultimately I decided the spot was also too shady even for a hydrangea, so the hydrangea went nearby instead, near the other 'Endless Summer' moved last year, by the Iochroma.  It will get a little morning sun, which it needs for flowering. 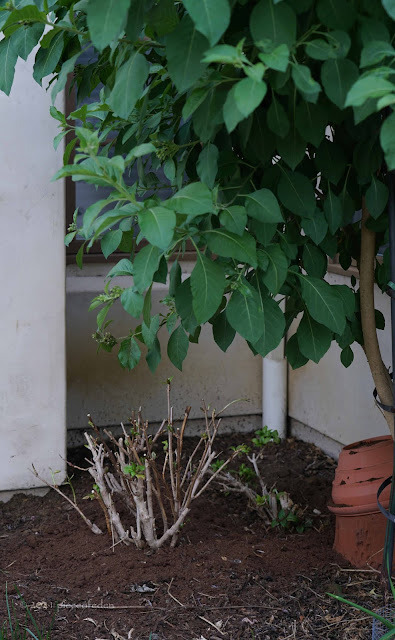 Finally, Fatsia japonica 'Spider's Web' got a place in the ground, in the shade of the Acer, but where there are fewer Acer roots.  I placed an empty container as temporary shade in front of it.  This location will give it a few hours of early morning winter sun when the Acer is out of leaf, dappled all day shade when the Acer is in foliage.  Hopefully it can handle that. 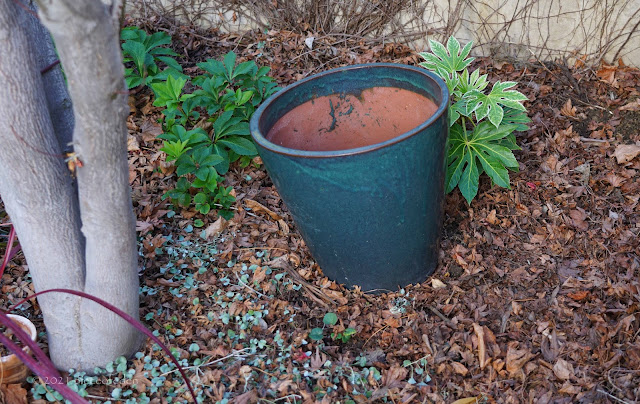 Oh, hey--Hellebore seedlings!  How 'bout that?  They are all invariably plain greenish-white flowers, but they make a tidy, rich green tuft of foliage all spring, all summer, most of autumn, and about have the winter. 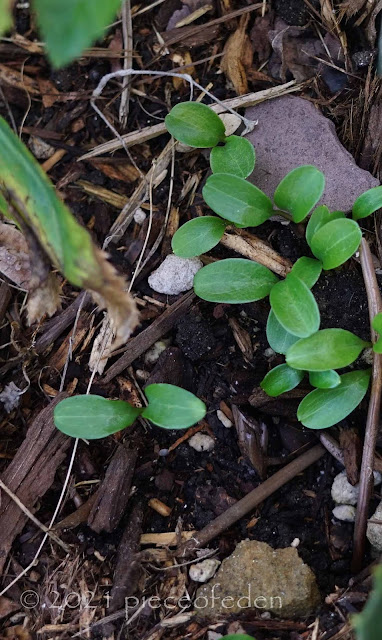 There is probably some room for a few more in the Acer bed. 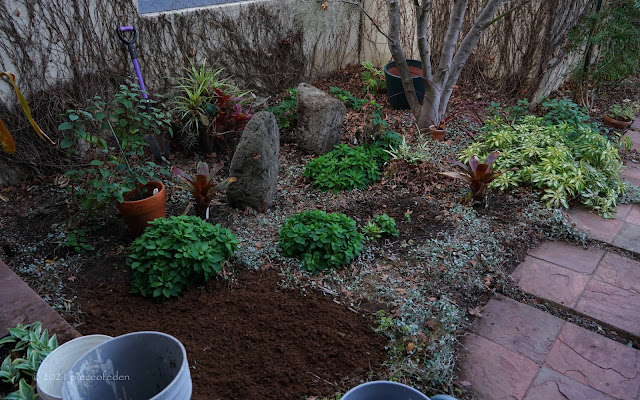 There's the current status of the Acer bed.  Itoh Peony (strangled by Acer roots), two Mangaves, and the Hydrangea all moved elsewhere, where hopefully they will be happier; the Fatsia planted.  The Hakone grass still wait to be transplanted in--not sure quite where to place it yet.  The addition of rocks as a kind of Asian-inspired focal point are still a question mark.  The trio available seem too small in proportion to the space.  Placement still to be decided.  Should one of the Abutilons move here?  More Hellebores?  Should one of the Aechmea imperialis get the Hydrangea's spot?  Still to be decided.

The long-awaited rain arrived at sunset.  We got an inch (25 mm) of the good stuff overnight, and several showers today. 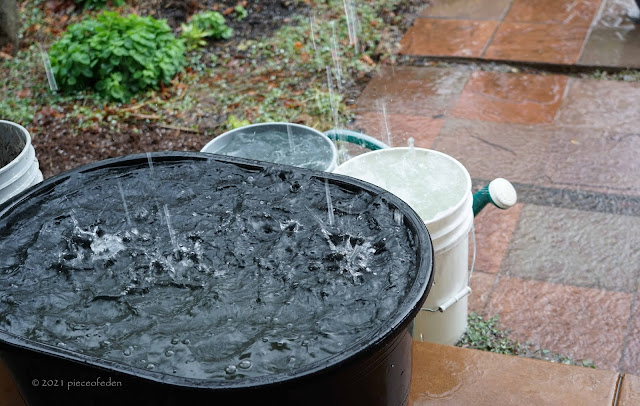 Oh, wait.  What was in that box on the doorstep?  Verbena 'De La Mina', Echium gentianoides 'Tajinaste', and two roses--'Golden Celebration'. 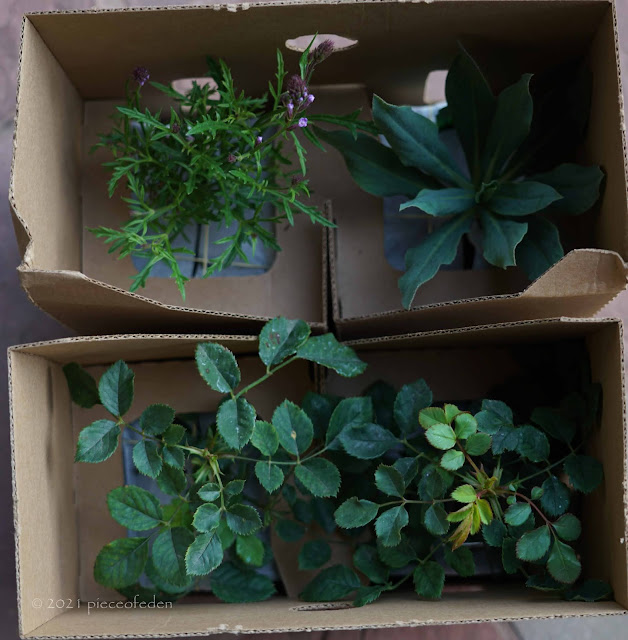 Yeah, yeah, I know.  Digging out roses, whining about rose problems, then I buy some more.  Typical gardener! 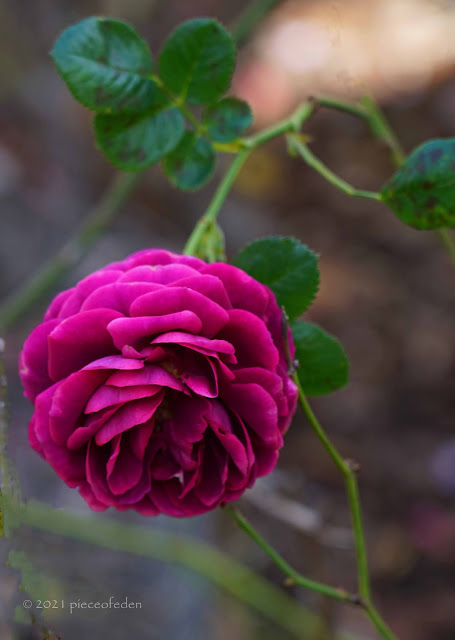