Time for plant shopping!  A relatively safe Pandemic excursion, as nursery shopping is outdoors, with lots of space.  Masks are required.  I wore two, and shopped at an off hour, when other customers would be few.  Cases are dropping here, so the visit was timed before the next spike upwards. 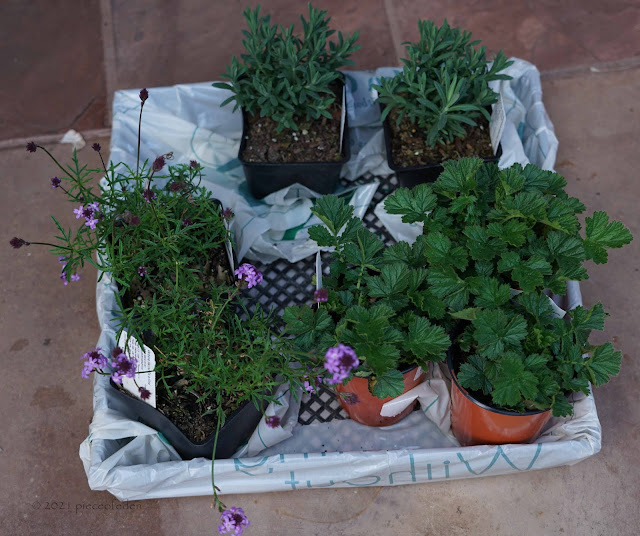 --Three Geum 'Totally Tangerine'.  I have no idea if these will bloom without winter chill.  Low price--might as well.  Commercial growers advice online read they will flower without chill, though better with it.  Apparently growers will chill their plants during production for better sales, because people mostly buy what's in bloom.  I grew 'Mrs. Bradshaw' for several years.  Each year it formed a perfect, tidy green mound, and never produced even a single flower.

--Two Verbena lilacina 'De la Mina'  I have some of this plant already, with mixed results so far. 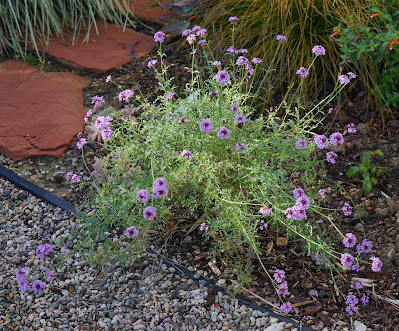 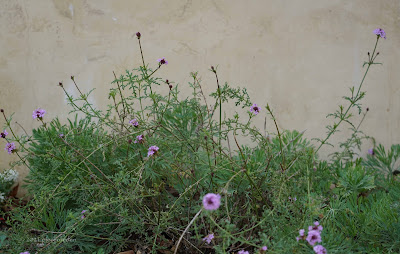 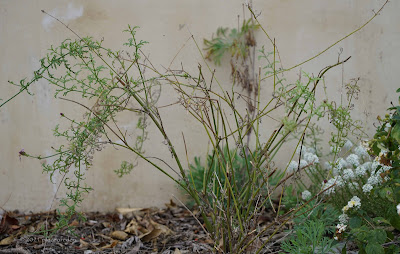 Supposedly 'De la Mina' is extremely drought- and poor soil tolerant, though here, the above results do not support that.  There are few butterfly plants in the garden, so I'm adding the Verbena.  V. lilacina is native to Cedros Island, off the coast of Baja.  The garden's other Cedros Island plant, Agave sebastiana, also struggled in hot dry conditions, malingering on the front slope for years.  My bad.  Finally to try and save it,  I moved it to lightly moist shade.  Voila!  Now, it's happy.  A Dudleya did the same thing.  Note to self:  when a plant does not perform in conditions supposedly good for it, try different conditions.

--Hellebore 'Glenda's Gloss'.  Oh, my!  What hybridizers are doing with Hellebores these days is wonderful. 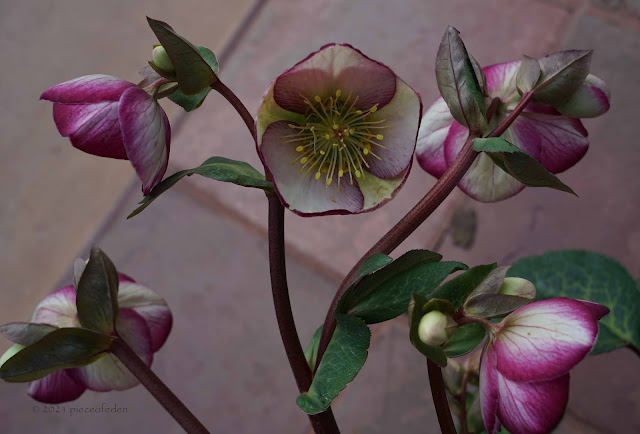 They'll keep at it, and eventually Hellebores will have ever more incredible flowers, but be fussy, weak, stingy, and disease prone. (See Hemerocallis and Roses).  But the present seems to be their golden era.

I did finish up cutting back huge 'Golden Celebration'.  It took about five hours stretched over one afternoon and the following morning.  The work was mostly pleasant, as it was very cool and quiet.  To spend hours grooming a single plant is a surprisingly touching experience, to become sensitive to the plant as a fellow living thing, feeling the sun it feels, the breezes that wave it, an individual experiencing a specific spot on Earth in this brief moment in time.  I spend more hours working on roses than on any other plant.  I share space and time with them.  No wonder it hurts to dig them out. 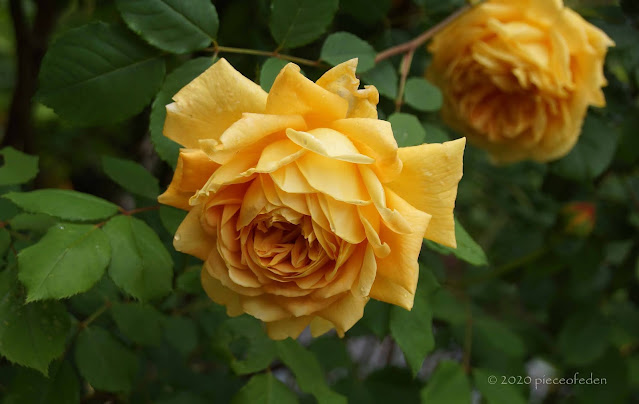 'Golden Celebration' is extremely vigorous, yet well behaved:  it does not send suckers everywhere.  The two new 4" GC's are already sprouting basal breaks.  Definitely time to prune the original:  new, swelling leaf buds were pushing off the old leaves, making them easy to pluck.  I de-tangled, de-twigged, sawed out a couple of dead canes, inspected, enjoyed, got annoyed when many clipped-off pieces hooked onto something like a cane or my arm and would not let go until the proper swear words were vehemently snarled.  You feel the aliveness of this rose, its love of growing and producing those big fat perfumed petal-stuffed cups of gold.  Unlike too many roses, this rose is never reluctant.

Almost done.  A couple more feet came off the top after this photo. 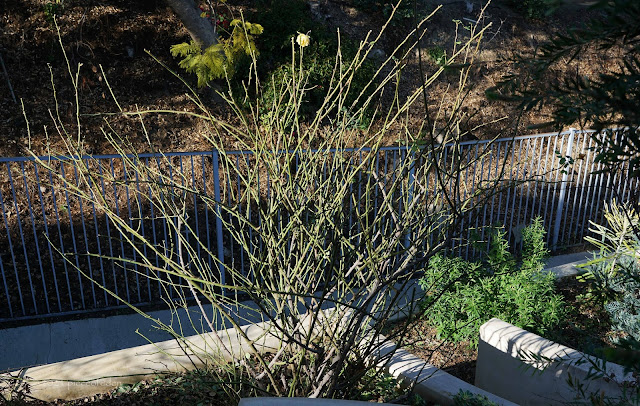 After that, I took another break for a quick visit to a small local independent nursery for potting mix.  There was no new stock except for annuals and bare root fruit trees (their specialty), but they did have great prices on Leucadendrons (less than half that of other places) that had been sitting a while unsold.  For many plants this is bad; for Leucadendrons, not so bad.  Their root growth seems to lag their top growth.  This nursery is fanatic about keeping their stock well watered, so the Leucadendrons did not appear to have dried out (something else to avoid when plant shopping). 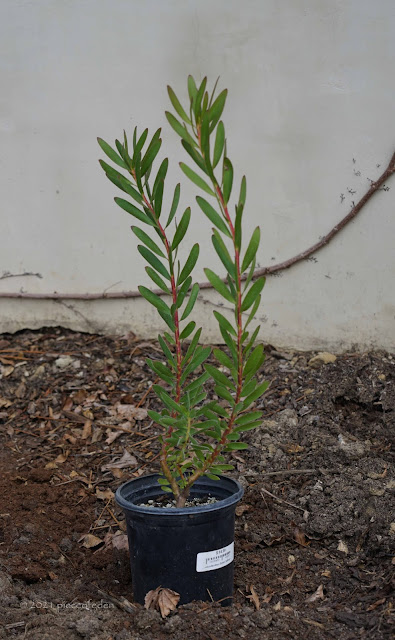 And a couple more Leucadendron meridianum 'More Silver'.  I've killed one (baffled as to why) and have another waiting to go where a 'Joe Hoak' is flowering.  I'm just curious as to figure out what this plant needs to make it happy, and the price was right.  I even remembered the potting mix. 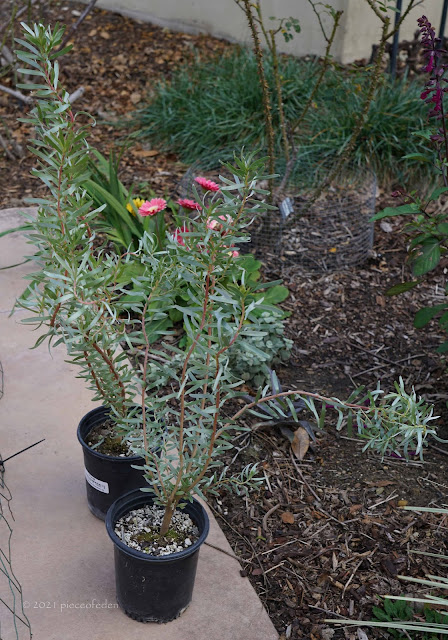 Some of the potting mix went to spots where roses and soil where removed, so I can plant the new 'Golden Celebration' roses in the same spots.  I exchanged old soil for soil that had never had roses  growing in it.  In addition, the chosen spots had host roses that appeared to be gall free, so I'm hoping the new GCs will be okay there.  Being as they are also potted own-root roses, I can plant them without injuring the roots.  Root injury allows infection to occur.

Then there was clean up around almost-finished-blooming 'Joe Hoak', so it can be removed as soon as the bees and hummingbirds are finished with it.  All the Dymondia growing past the edging got removed. 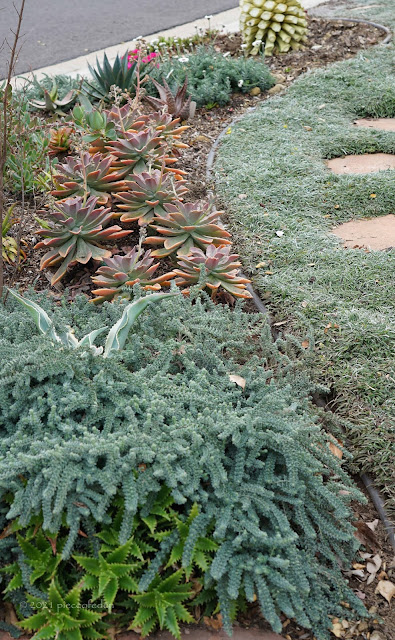 'Joe's leaves I lopped off.  He doesn't need them anymore.  Two 'More Silver' will get 'Joe's spot.  One must go elsewhere. 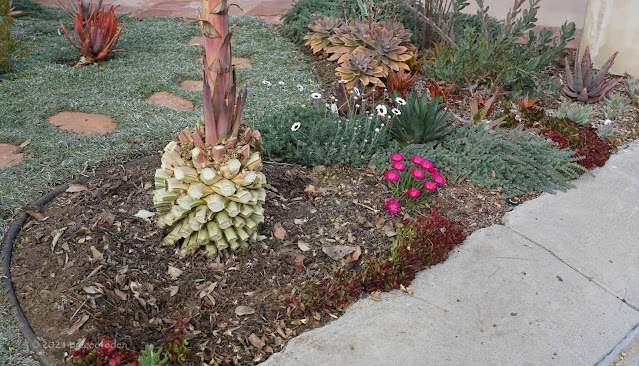 I ended up tossing a couple dozen small Aloes growing around 'Joe' that had offset like mad.  A shame to throw them out, but they have become simply overwhelming.  My giveaways out on the street were not successful.

The Santa Ana winds kicked up fiercely Wednesday night into Thursday morning. Wednesday morning, by dumb luck, I planted the Lavenders, Geums, Verbenas, and the two new 'Golden Celebration' roses, before the wind had the opportunity to shrivel and kill them and blow them a half mile down the hill.  Hooray for dumb luck!

Other activities.  The Agave attenuata 'Kara's Choice' looks like it is preparing to flower.  No problem.  I've enjoyed it for years. 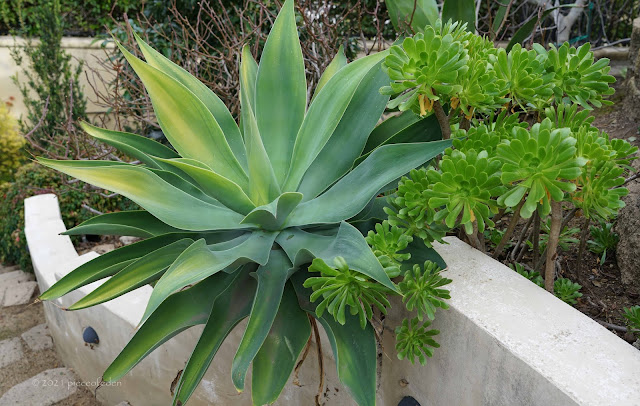 In pruning and leaf-stripping the adjacent 'Bishops Castle' rose, I discovered... 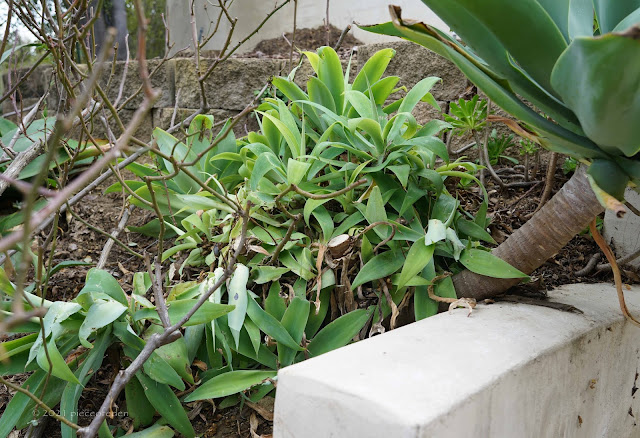 Oy. No, I don't need forty new  'Kara's Choice'.  Actually don't need any--'Ray of Light' has surpassed 'Kara' in my affections.  See why I like solitary Agaves and Aloes?

A happier discovery, up on the west slope:  a Rhodanthemum hosmariense seedling.  This fine little species can be divided if some of the growth happens to root itself away from the base of the plant, but never before has a seedling appeared in the garden.   I carefully moved it to a good location. 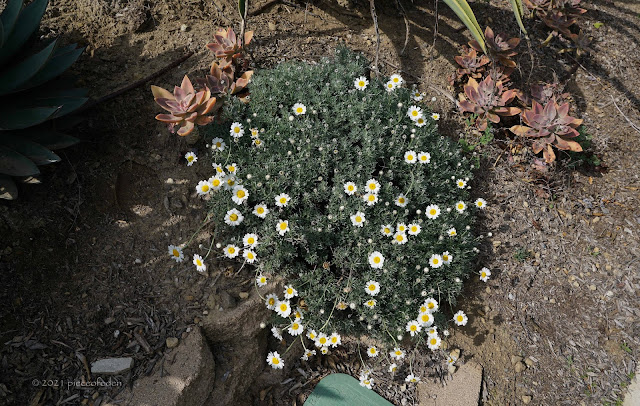 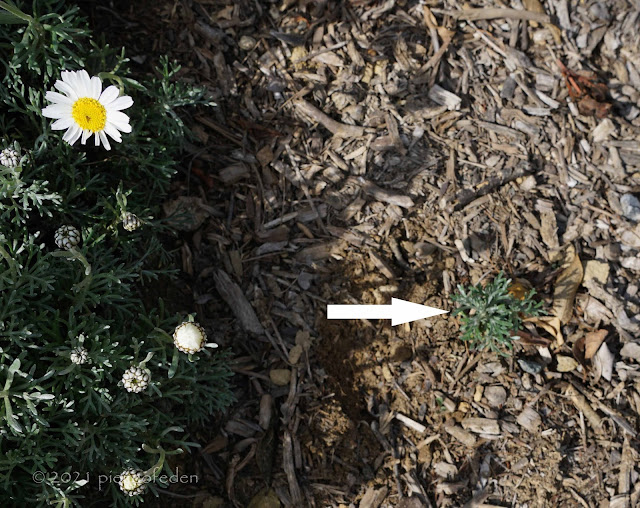 I was up on the neglected west slope to weed.  It wasn't as bad as expected.  The plan was to mulch it heavily last February, but last January, of course, I broke my arm.  The slope was left to look bad for another year.  Besides the not-as-many-as-feared weed population, there was a clump of Tazetta Narcissus, and a native annual Lupine. 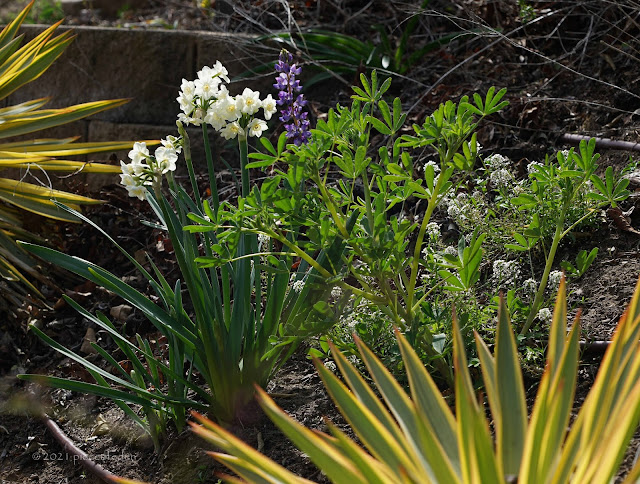 The Narcissus date back 20 years.  I pulled them all because they were gorgeous but aggressive, pretty but rampant--in short, weedy.  A tiny bulb or two survived hidden behind an Agave and they've grown large enough to bloom the past couple of years.   Lots and lots of Lupine seedlings, but the rabbits ate them all except one.

Also up on the west slope, it's time to admit that two of the three 'Valencia' orange trees need to come out.  I cringed to realize they've been struggling and failing to establish and grow for over a decade now.  They will never thrive.  Time to say goodbye to them, and to welcome to something new.  Add that task to the list. 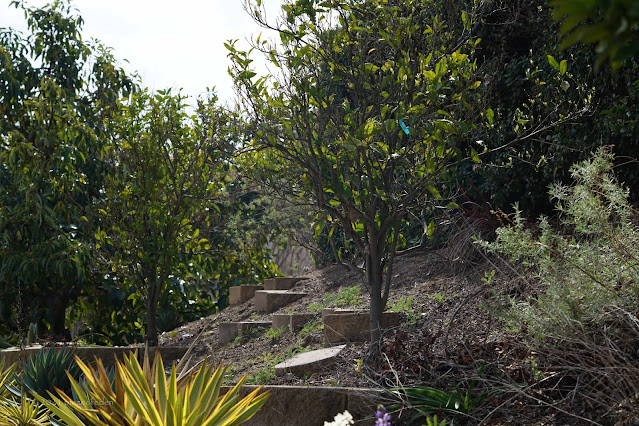 Back to the empty spot where roses 'Altissimo' and 'Tuscan Sun' were removed due to crown gall. 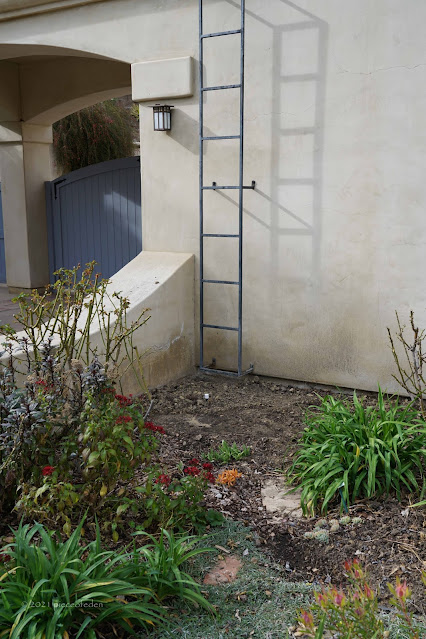 Short term solution:  moved Salvia 'Waverly' there from a place that was too small for it.  'Waverly' grows (and grows, and grows) and blooms year round.  It's a fine nectar source for the usual bees and hummers, if not a must-have for the gardener.  Nice plant, just not...spectacular. 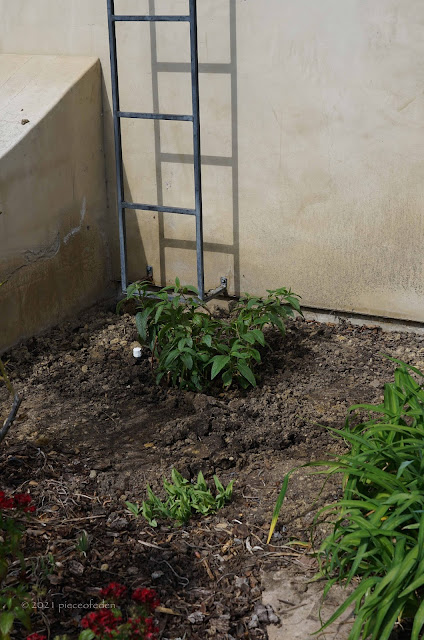 Not much in the way of eye candy in this post, so I'll end with some. 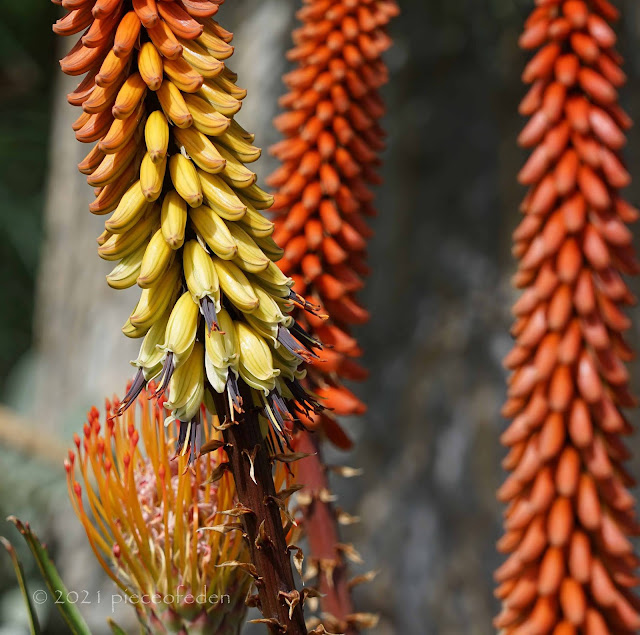 This week the Hooded Oriole couple appeared, as they have each spring for several years.  They come for nectar.  The male scouted out the front slope.  Then he vanished, and the female appeared, to feed from Grevillea 'Moonlight' and Aloe aculeata. 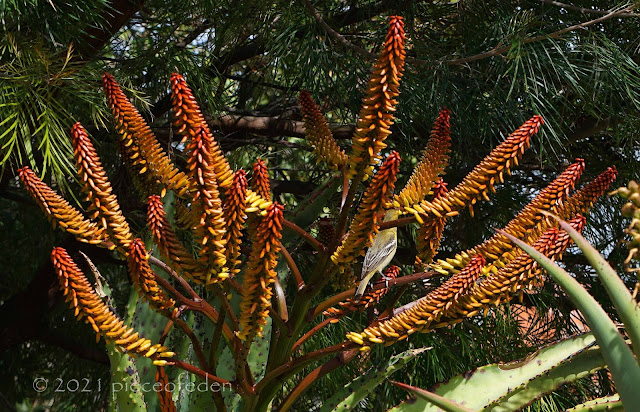 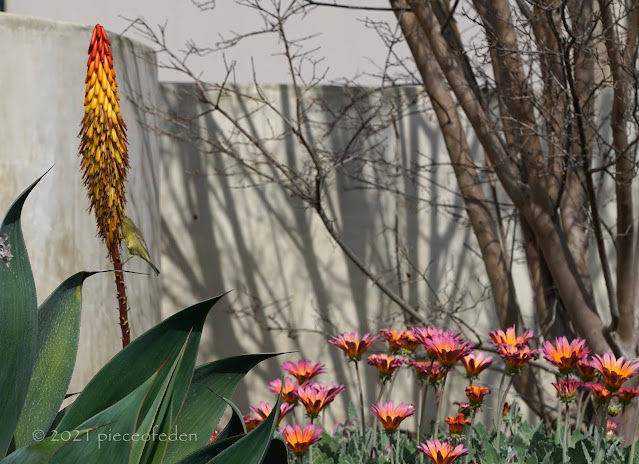 Aloe aculeata is extremely popular.  An Orange Crowned Warbler at it, too: 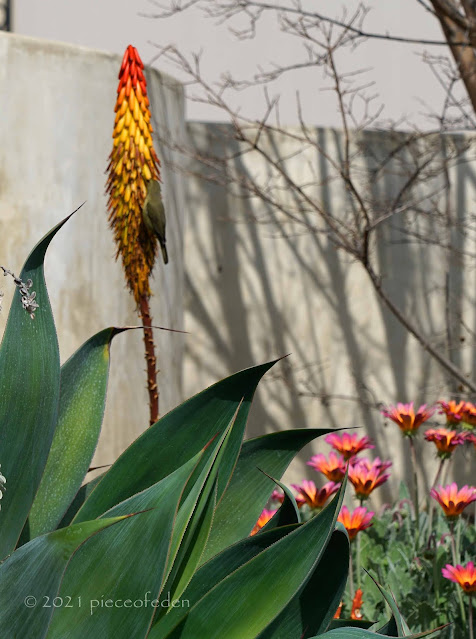 The gardener and the garden are starting to feel renewed.  Changes to enjoy this spring.