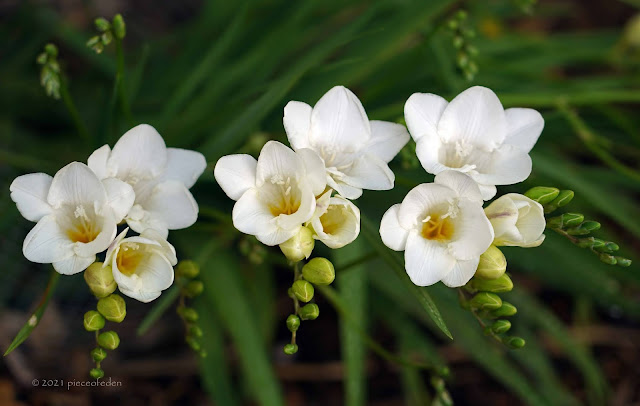 I found more young seedling Limoniums to transplant to the front slope, but first they will have to spend some time pampered in containers in the shade.  They are tough, tough plants in one respect--the ability to bloom and look attractive in bone-dry conditions, but as seedlings they are extremely fragile. 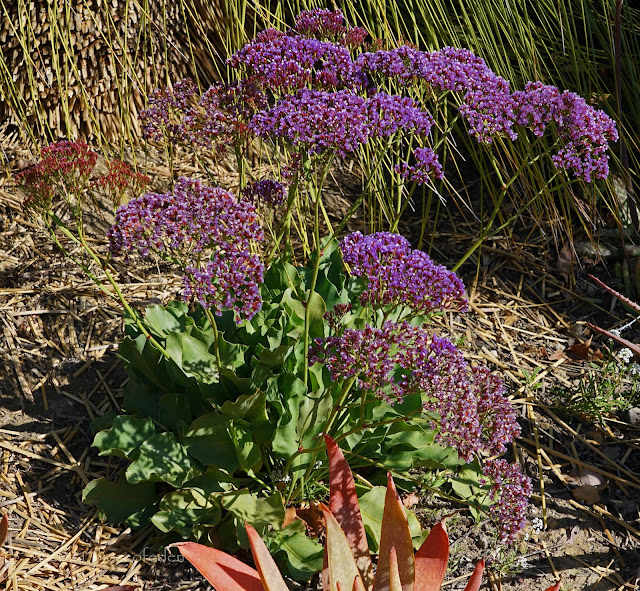 Go get the portable shade!  Not tough: 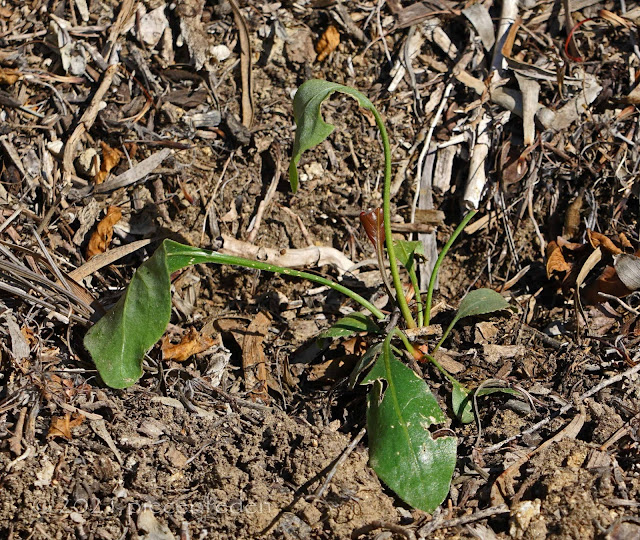 Moved, they go into shock for days and don't always recover: 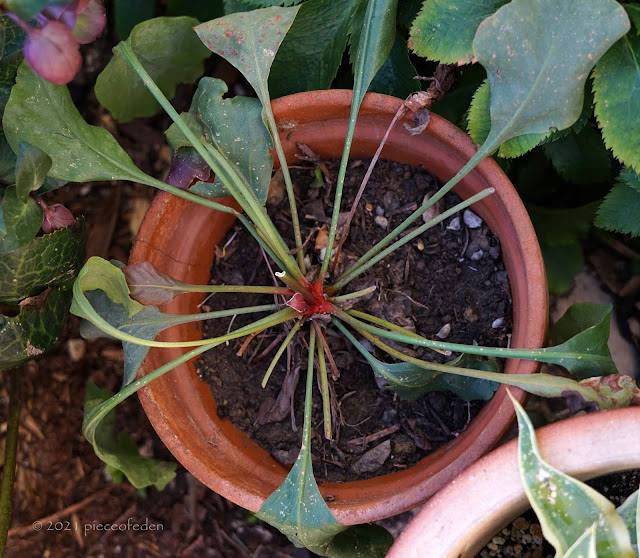 The previous seedlings transplanted to the slope are still alive, but require shade and daily watering for at least a couple weeks. 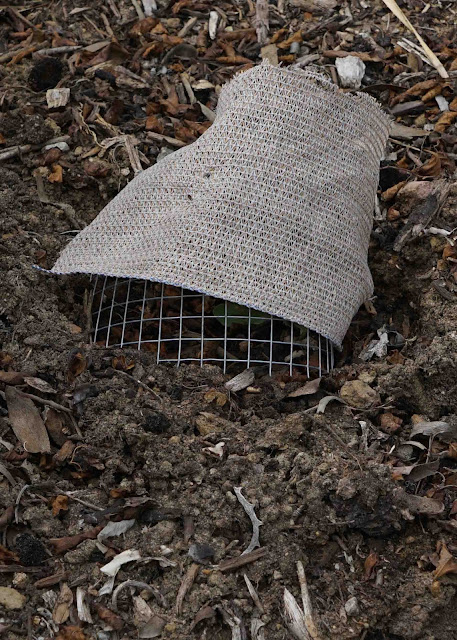 Hunnemannia seedlings, though I have hundreds and would be happy to have them on the front slope, refuse to transplant at any size.  So far, after much seed-tossing, there are two plants growing on the front slope.

Where they chose to grow: 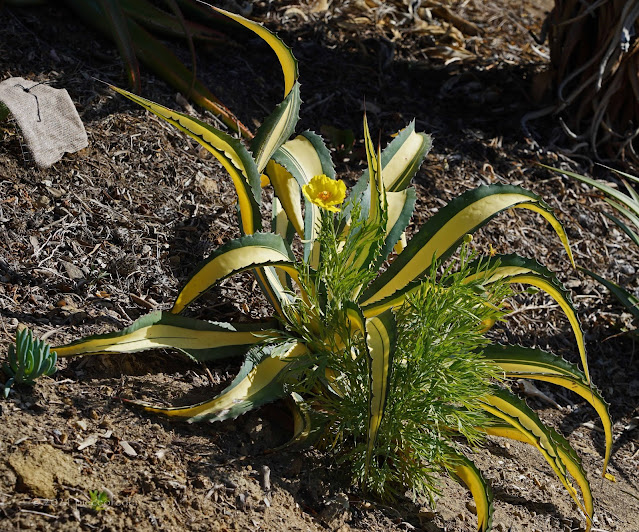 While not for the hot dry front slope,  tiny Hellebore seedlings are otherwise easily transplantable.  I potted up and gave away nearly a dozen at garden club plant swap, tossing two into the compost bucket because they did not have even their first true leaf yet.  Two days later, under the lid in the compost collection bucket, they had produced a true leaf each and looked perky, fresh, and in love with the idea of living, even in pitch blackness amidst rot.  Out of the compost and into potting mix went they.   Bravo to the lovers of living!

Those two on the left: 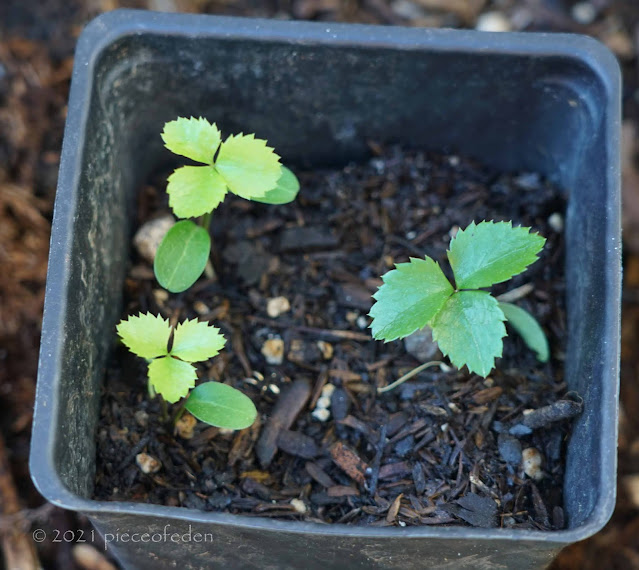 A neighbor was looking for milkweed plants--seedlings potted up and given to her a couple of days ago.   They are resilient.  The word "weed" in the name is indicative.

Unfortunately I, not plants, also failed out on the front slope.  The silver-foliaged Leucophyllum probably need regular cutting back, as in the lavender method of grab-it-like-hair-and-cut-off-half.  I let them go too long and they became a lot of bare, woody stems.  Pulled them this week, along with a beautiful 'Blue Flame' Agave that was slowly crushing a different beautiful Agave, A. ovatifolia 'Vanzie'. 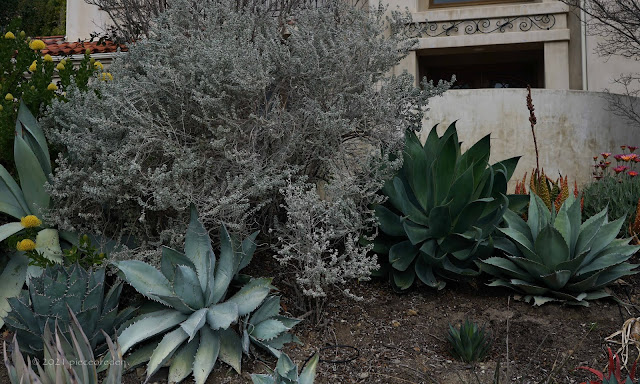 I had experimented with cutting back one of the Leucophyllums hard, which did not work.  Just a bit of weak mostly bare growth re-emerged (indicated by arrow) 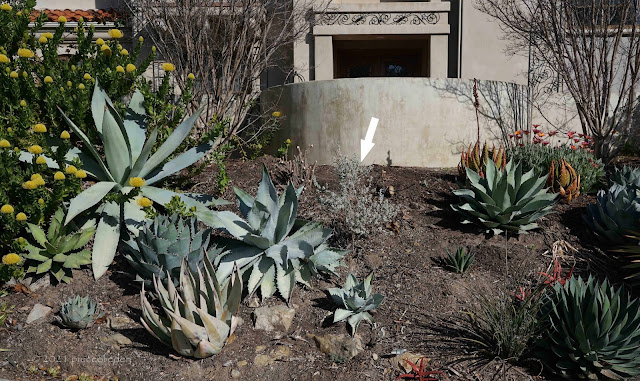 The front slope seemed to be getting too shrubby anyway.  Removing the Leucophyllums opens it up a little.  Plenty of Aloes and Agaves waiting for a place in the ground, once the stumps come out.  Such as the trio of once-tiny Ikea unnamed Aloes, three in a 2" pot for $1.99.  A. ferox, maybe? I knew they were not the same as the rest of the flat of 2" pots, which was undoubtedly Aloe 'Vera'.

They had a good winter: 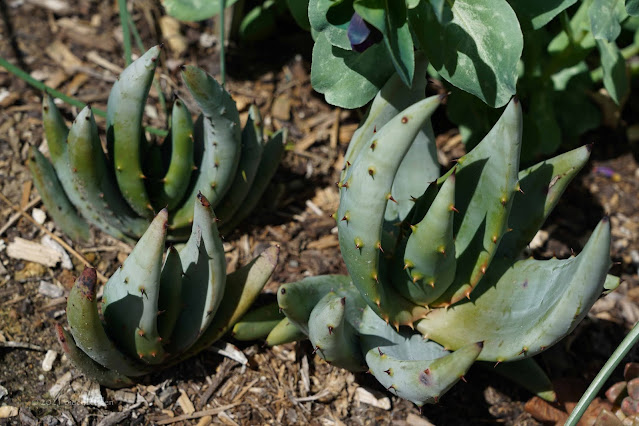 A bit of beauty to be found currently in the garden, though the big spring show is yet to come. 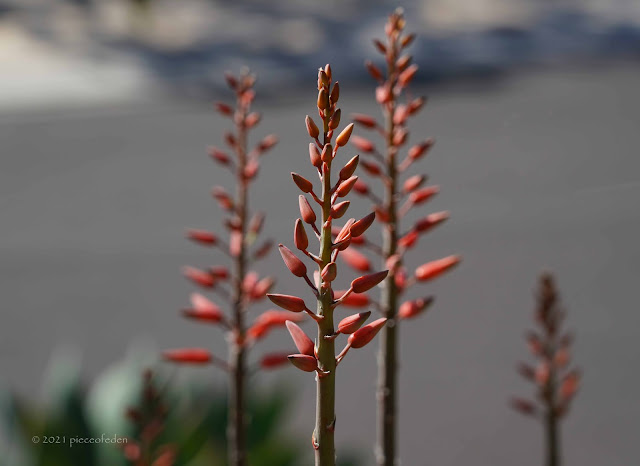 Aloe buhrii, which has split into three rosettes (not offset, it split--too much water, perhaps) has its very first flower stem emerging.  The flower (and the plant) are very similar to Aloe striata. 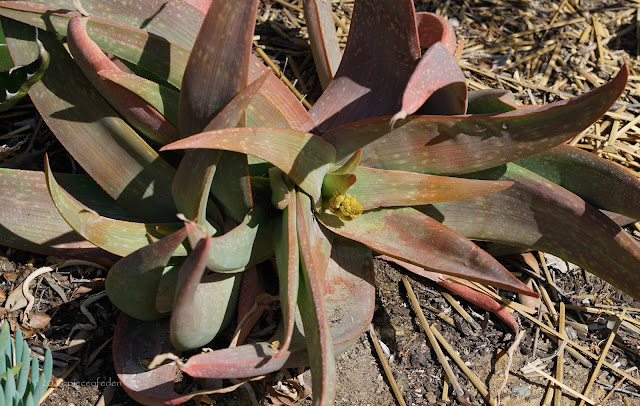 Aloe 'vera'.  Quite an attractive plant and flower.  Wish it would not offset.

For the sunshine deprived: 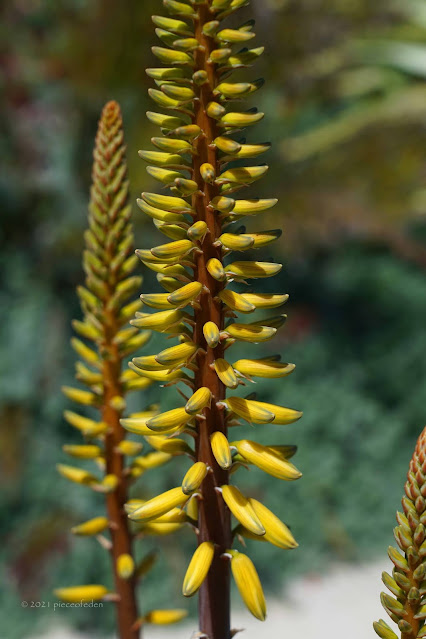 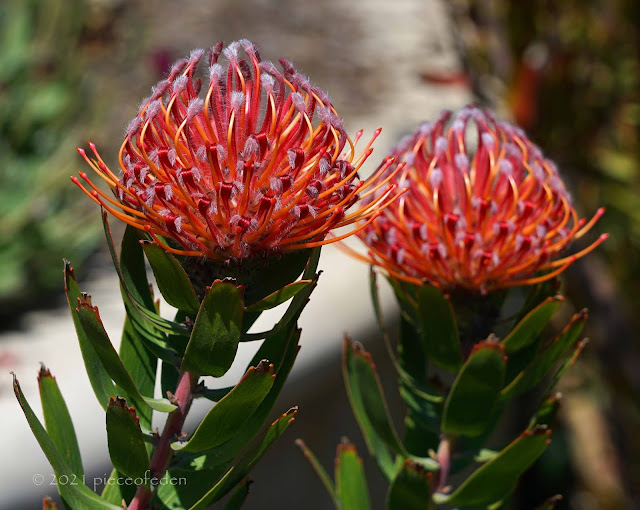 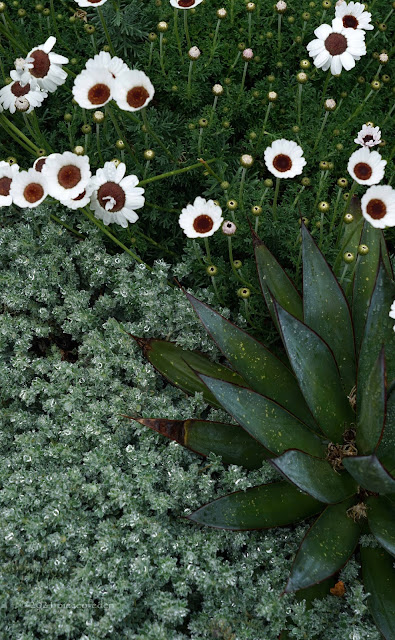 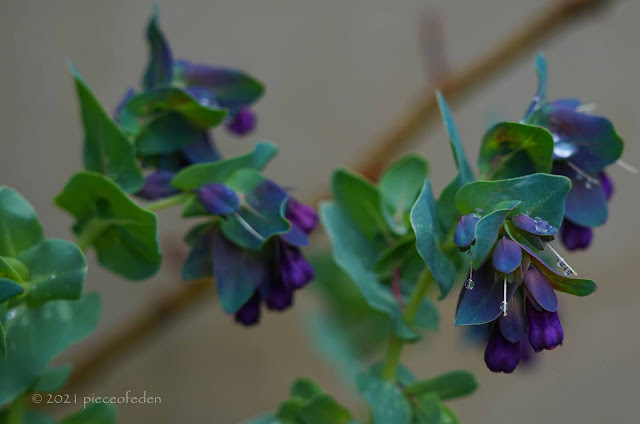 I will end this post with the tough old lady. 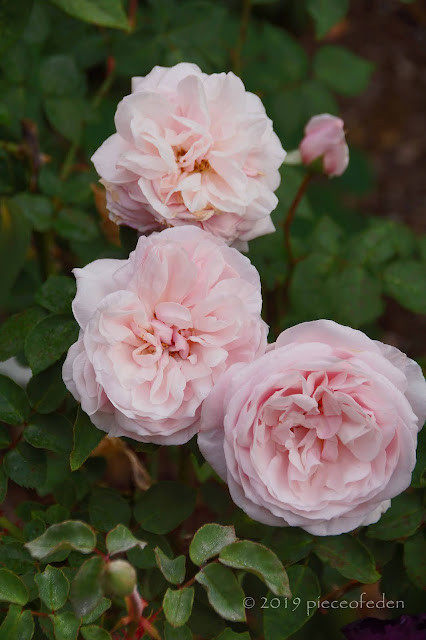 Rose 'Souvenir de la Malmaison' was introduced in France in 1843 and is still grown.  Most modern rose cultivars are introduced and vanish in just a few years. SDLM's longevity--nearly 200 years--is remarkable. 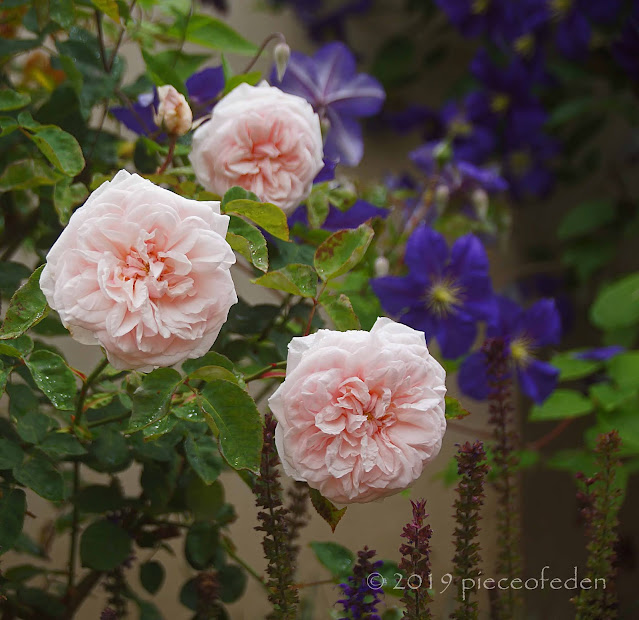 My copies of SDLM, one own-root from Chamblee's in 2000, one grafted on Multiflora, second hand, from an acquaintance, around 2004, were showing their age as individual plants with dry, gnarled, woody bases and weak growth.  Still producing exquisite flowers, but looking weary.  Time to remove and replace with new copies.  I cut them back to stumps but could not quite bring myself to dig them out. 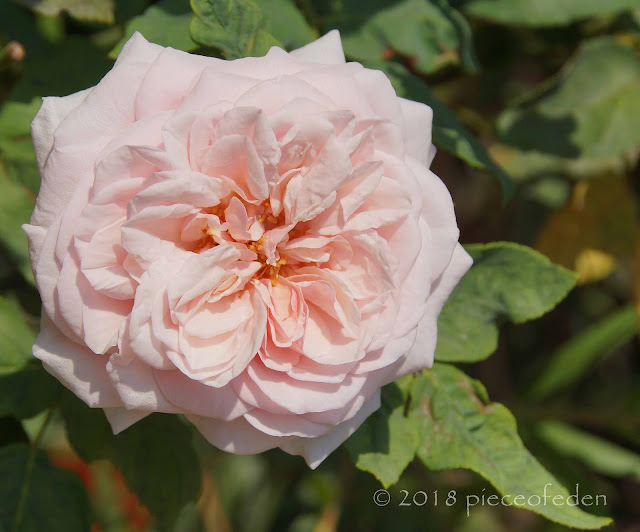 Hacked back to stumps, they both rapidly and vigorously sprouted fresh, strong growth from their gnarled stumps, the plant on her own roots, better and faster. 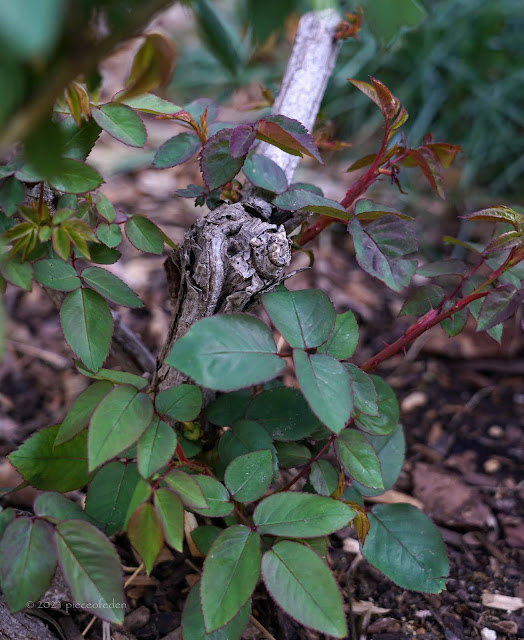 One heck of a tough rose, SDLM.  Perhaps I'll plant those life-loving hellebore seedlings in the shade of a revitalized SDLM.  Resilience, love of living, endurance, starting afresh.  Don't count old ladies out. 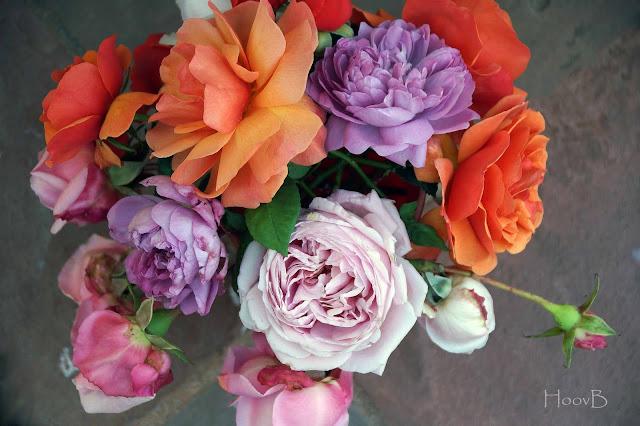 Happy Spring!  Got any tough old ladies in your garden?