At The End Of April--Good And Bad 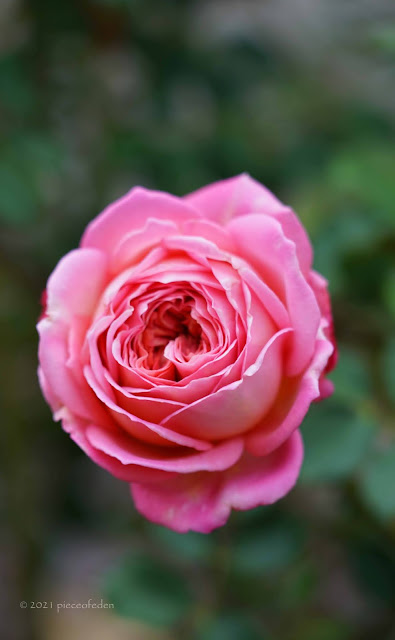 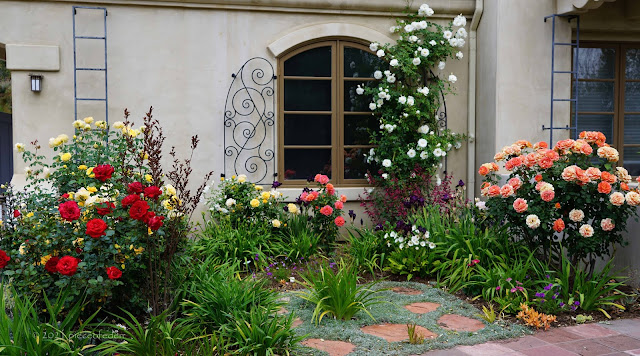 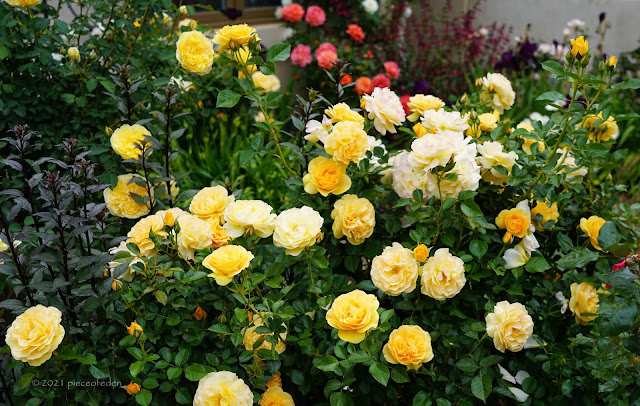 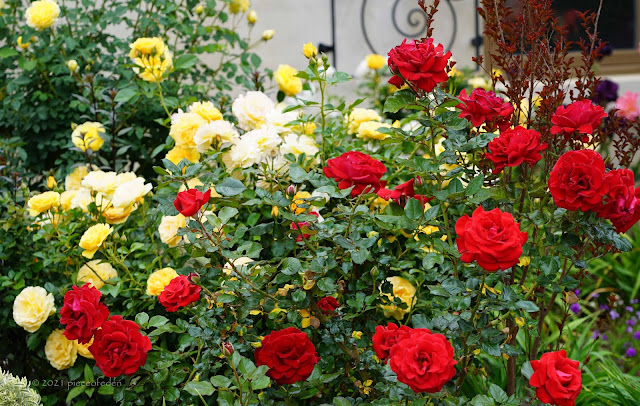 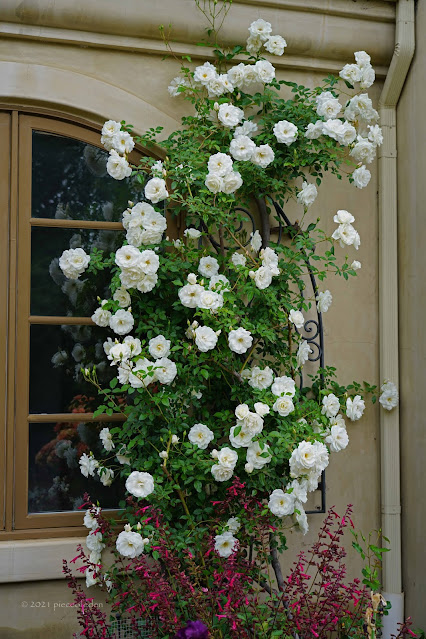 Fall Project 2020 was a small one:  reworking some of the plants in the Acer palmatum 'Oshio Bene' bed.  All done gradually over several months, as various plants went dormant or awakened.

Abutilon 'Souvenir de Bonn', gone.  Itoh peony 'Misaka' and Hydrangea 'Endless Summer',  moved (they survived).  Three small volcanic stone boulders that had been sitting around, Fatsia 'Spiders Web' too long in a pot, a bit of 'All Gold' Hakone grass, three Alcantarea imperialis, and a small clump of Sedum makinoi 'Ogon', planted.   A rooted Fuchsia cutting that languished in the shadow of the Abutilon has established, quadrupled in size, and looks healthy.  All fairly minor changes, but the area looks less random now.   Less random--good. 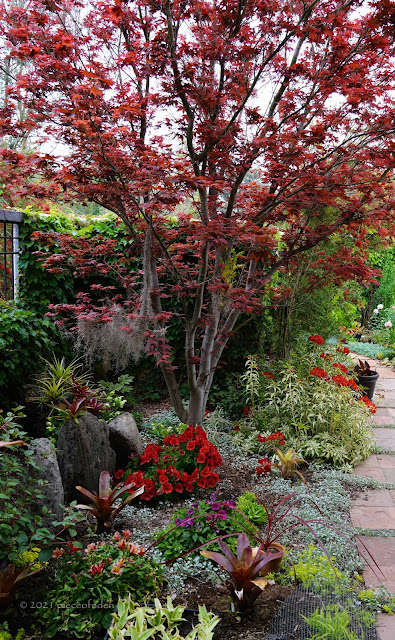 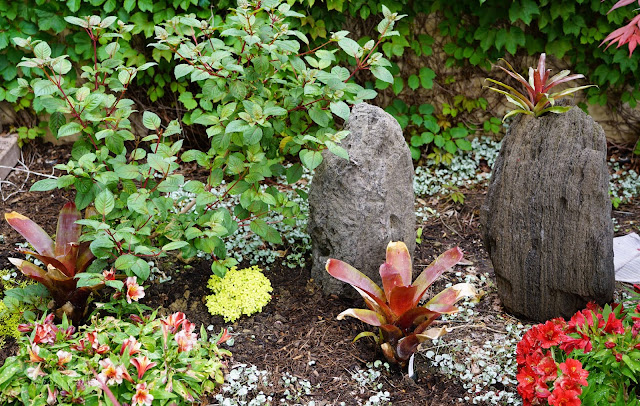 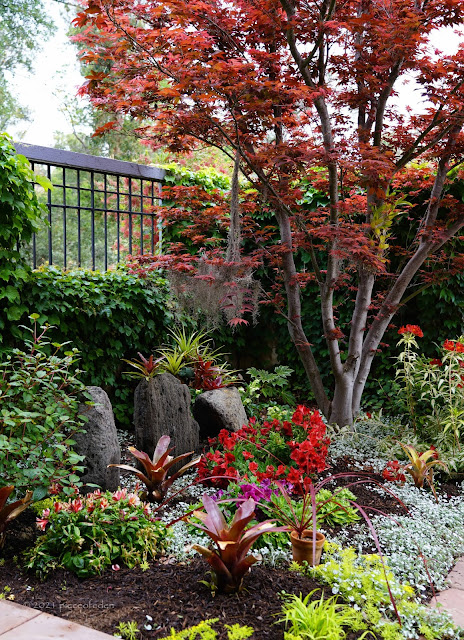 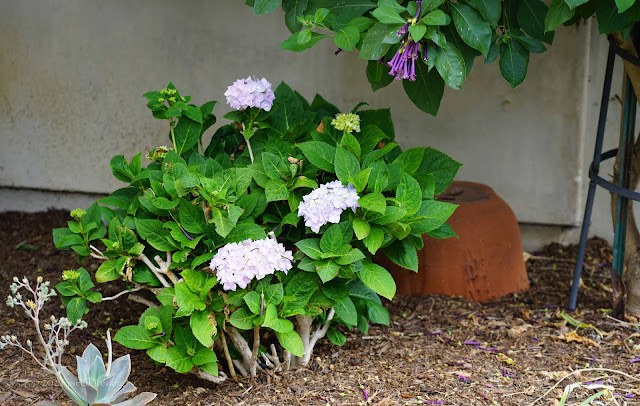 The Itoh peony 'Misaka', managed to produce a flower in each of its two new locations.  More good! 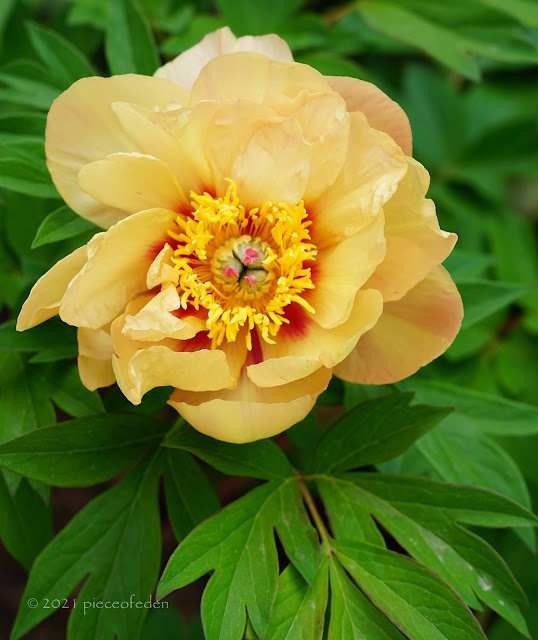 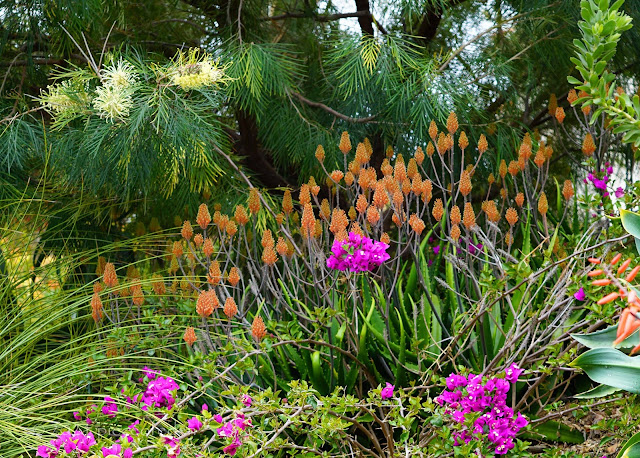 Next, alas, a towering hunk of Bad.  Aloe ferox out on the front slope--its central growing point died due to pests--either mealies or woolly aphids.  Arrrrggghh! 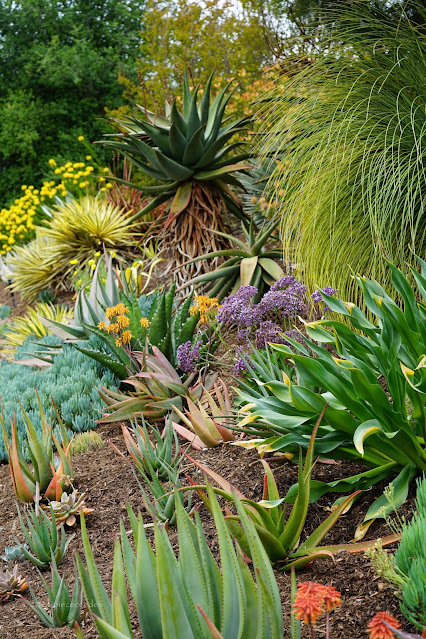 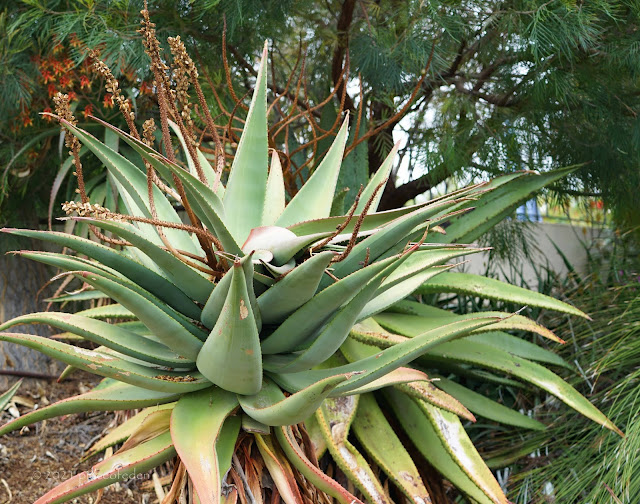 The center could not hold.  It came right out. 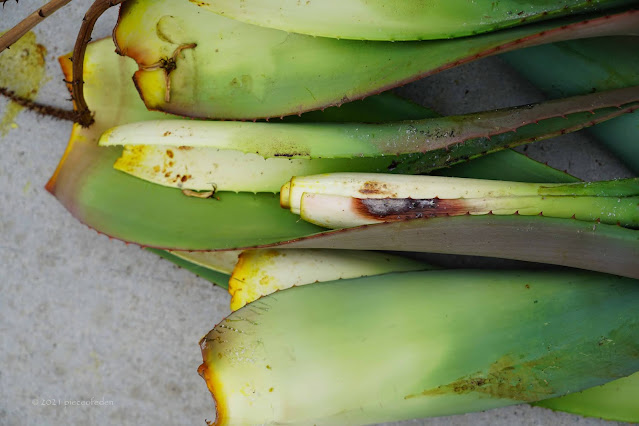 It's rather hard to tell because of the height of the Aloe, but...baaadd. 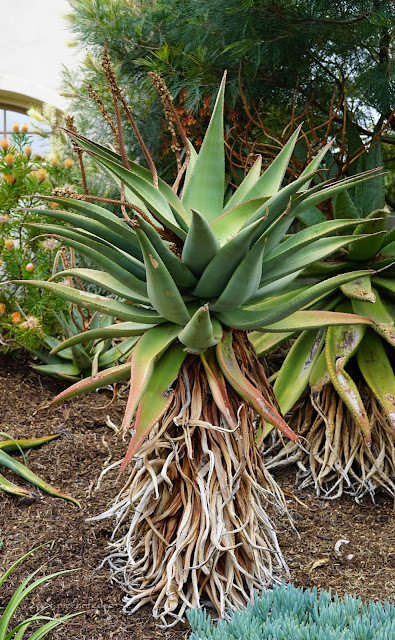 There are plenty of other tree Aloes waiting for a place in the ground...marlothii? 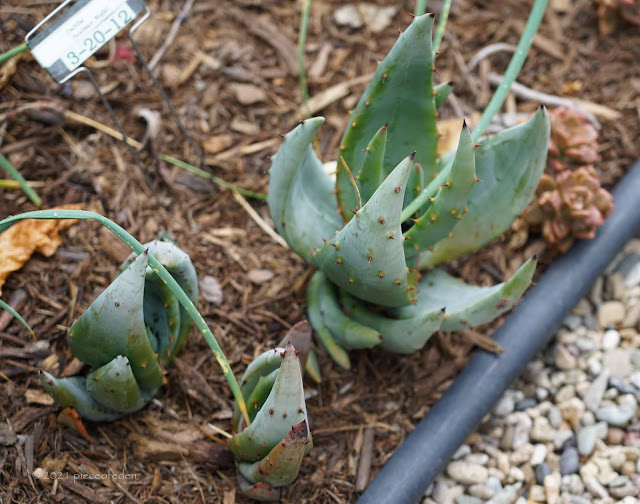 This A. ferox 'Candelabra Form' in Proteana needs more sun...it's pretty big, though.  Heavy to move, but not impossible. 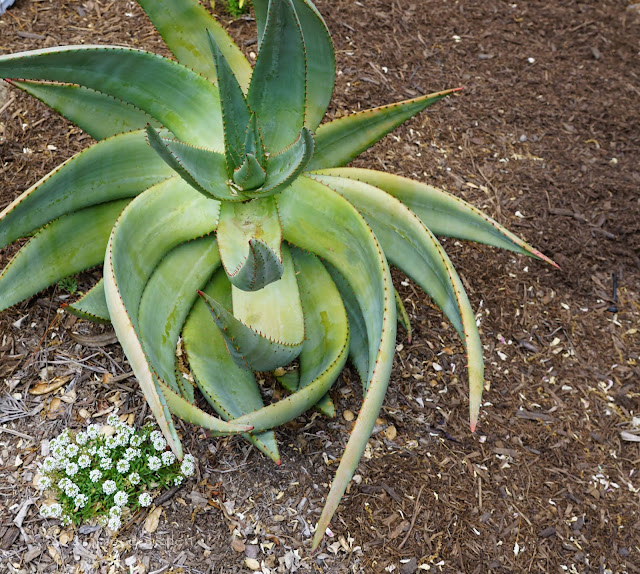 There are also still-in-pots small A. rupestris and A. africana.  No shortage of undamaged tree Aloes needing a place.  Would the ferox be able to recover its health and its beauty?  Here's one in a nearby garden that managed to grow a new center: 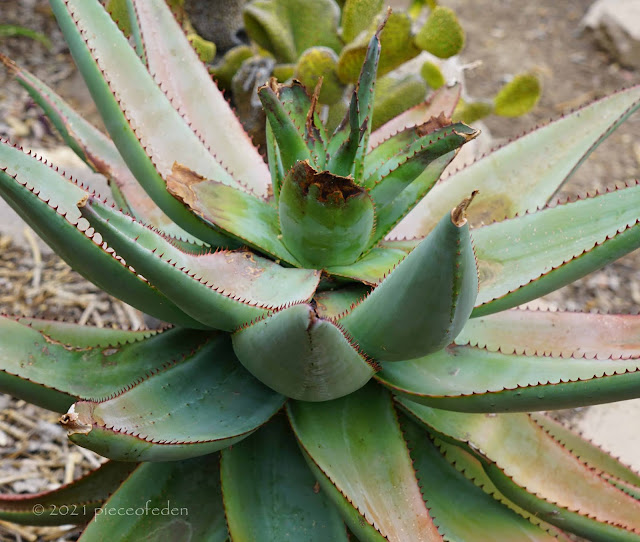 No guarantee.  This thraskii, also in a nearby garden, badly damaged by...Aloe aphids??? grew multiple rosettes: 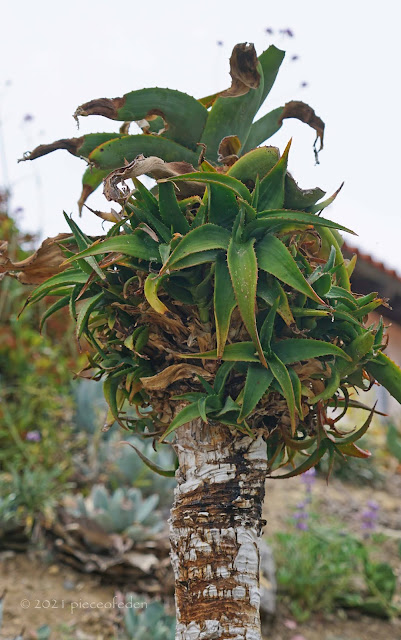 Hmmm...tough call.  I won't agonize over it, though.  Remove it or leave it, accept the consequences of one or the other.  Pick one.  Done.

Somewhat bad:  one of the Calylophus purchased recently got eaten to the ground by a blankety-blank rabbit.  None of the other Calylophus has ever been touched--why that one?  Grrr.  Perhaps it will grow back--there is a touch of green left.  I gave it a protective hoop of hardware cloth. 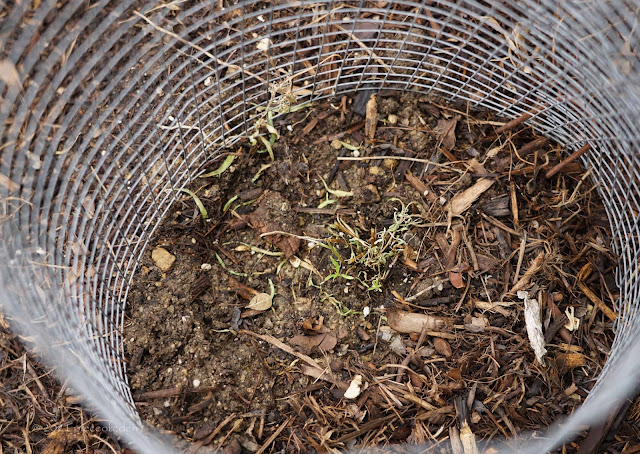 Gorgeous Leucospermum 'Blanche Ito' is flowering.  Good.  I planted it too close to Leucadendron 'Sylvan Red', which is hindering 'Blanche's growth.  Bad. 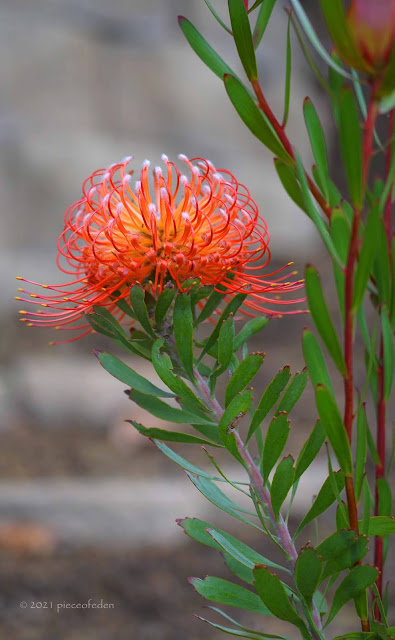 The Hippeastrums are all in full bloom. 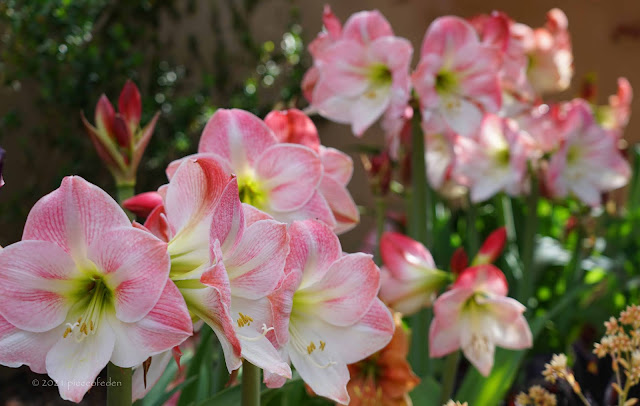 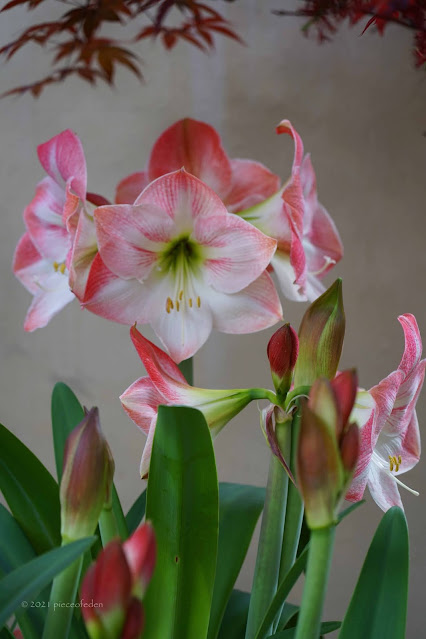 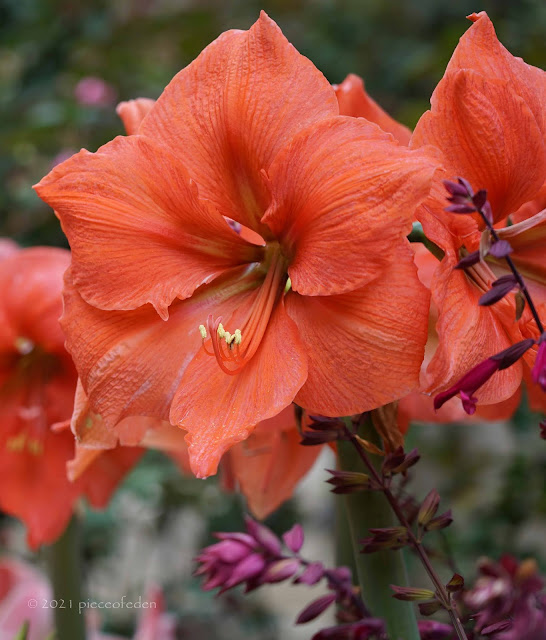 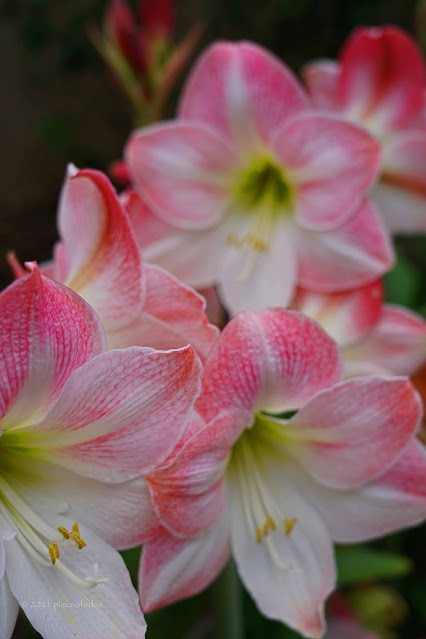 Super good, (and also in Amaryllidaceae) the Boophone bulb is going to flower for the first time.  I moved it into more sun, all the foliage died, and I thought I'd killed it, but, no. 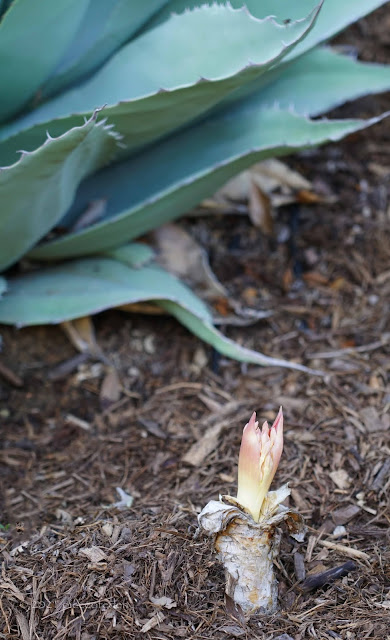 Loved plants, for the most part all good, make the trickier and needier ones more tolerable.  Gardening is life, a mix of good and bad, of tedious work, happy surprises, small successes, pain, unsolvable problems.  It can be an examined, thoughtful life.  Good.