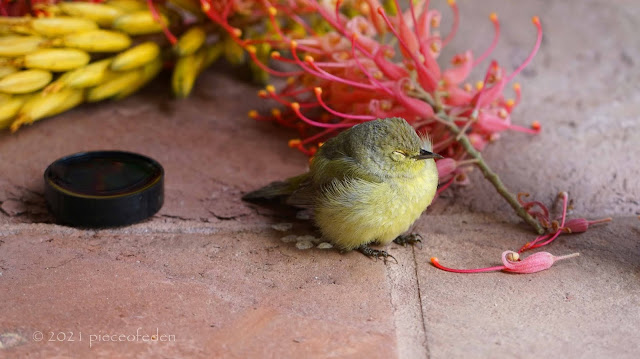 Sunday afternoon a BAM! on the window—uh oh.  A little bird on its back on the patio, its wings fluttering helplessly.  Not dead.  Near death?  Stunned?

Beloved gently moved it a few feet, to under one of the patio chairs, to give it a little cover.   An hour or so later, it rolled over and sat, eyes shut.  Night fell. Still there.  Still alive.  I thought something would come and eat it in the night.  What could we do?  Nature would have its way.  Most bird-hits to windows are fatal.

It was still there Monday morning, in a slightly different place.  Fluffed up and motionless.  I placed a little-bird-sized bottle cap of water near it, in case it could drink.   Cut some nectar-rich Grevillea flowers for it, at least to provide the comfort of nearby plant material.  Little bird continued to sit, occasionally opening its eyes.  It moved a little more, now and then.  Occasionally it panted, its little round body jerking a bit--which seemed to be a bad sign.  At lunchtime it was still alive, and had moved a little more, towards the edge of the patio.

I went to the kitchen for a lemonade. When I came back, little bird was gone.  I looked all over and under plants, shelves, tables, chairs.  I looked all through the walled garden, then on the other sides of the walls, down in the gully, and behind the house.  No little bird. Did it fly off?  I hope so.  Nothing predatory was around--no jays, crows, or anything else.  Some of the water was gone from the bottle cap.   I taped a sheet of paper to the glass of each door, to warn off other birds.