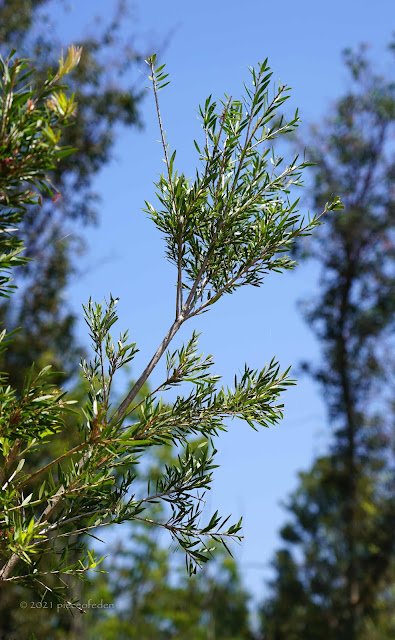 Verticil-like growth habit of Callistemon (Melaleuca) 'Slim' . All the spent flowers have just been cut off.

"In botany, a whorl or verticil is an arrangement of leaves, sepals, petals, stamens, or carpels that radiate from a single point and surround or wrap around the stem or stalk."

verticil -- "a circular arrangement of parts about an axis"

A different example of whorl--Leonotis leonurus: 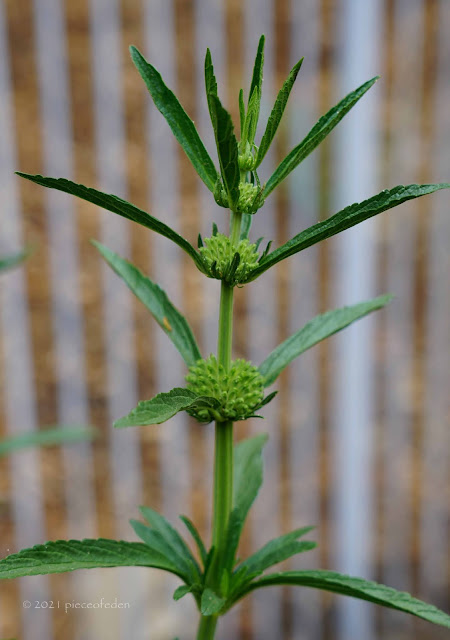 All nine Callistemon (Melaleuca) 'Slim' in the garden produced a lavish crop of flowers in April.  The nectar-rich flowers fed Orioles, various warblers, hummingbirds, bees, and surely a few other species besides--I found a couple of egg cases on stems, waiting to release baby Mantis.  Under the weight of the beautiful crimson flowers, the young shrubs flopped everywhere.  For a few weeks, the garden was a 'Slim' obstacle course.

Hair became full of red flowers from every trip down this garden path: 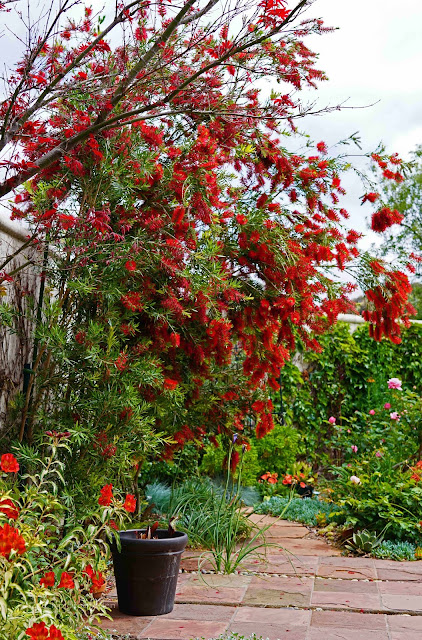 'Slim' functions as narrow screening here in my garden.  The low water requirements, heat tolerance, and the benefit to bees and nectar-feeding birds are pluses.  Dense narrow growth can be developed  by shearing the plants lightly immediately after bloom.  As the flowers completed, I've been deadheading them.  Best to be quick about deadheading, because 'Slim's new growth sprouts at the tips of flowering stems as soon as the flower begins to fade.  Delay, and you are cutting off fresh new growth.  After a cut back, the stem branches, making the plant's foliage more dense.

New growth emerges (on the right) at the tip of the flower stem.  The previous flush of leaves is to the left of the just spent flowers:

The history of this stem can be read.  Starting on the left, the empty stem is a set of flowers that did not produce seeds.  Moving right, foliage grew from what was then the stem tip. Next is a former flower set that did produce seeds, succeeded by foliage, and then the latest, newest flower set.  Foliage would normally sprout from the tip of the stem just beyond the newest flower.

In the next photo, three 'Slim's trimming job is almost complete.  They're mostly vertical again.   They provide screening of the house in back of us.  To keep them growing vertically, it was necessary to stake them.  They are too close to the wall, and they want to lean away from it.  That planting area is only 30 inches (76 cm) wide. 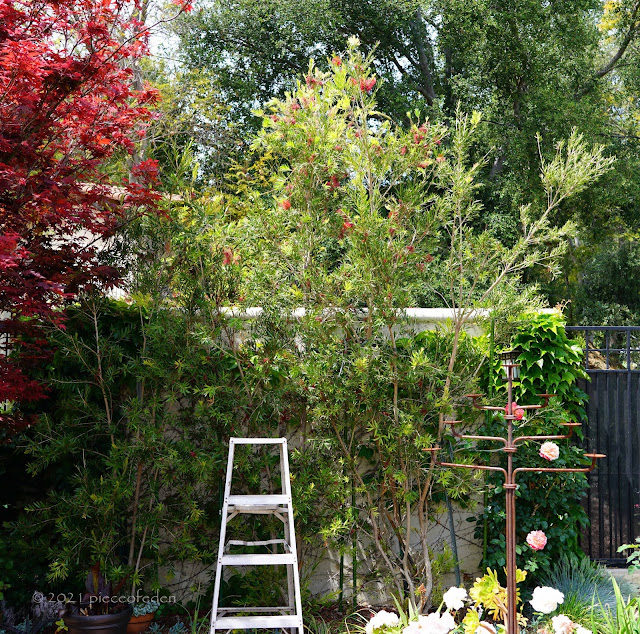 Ideally, the planting area should be wider.   That would mean moving the path to the back gate away from the wall, which involves moving plants, will change the view out the back door, will make the path illogically indirect, and affect various other things.  It's exasperating having (theoretically) plenty of room for the 'Slim's, and being unable to use it without creating other problems, and a lot more work. 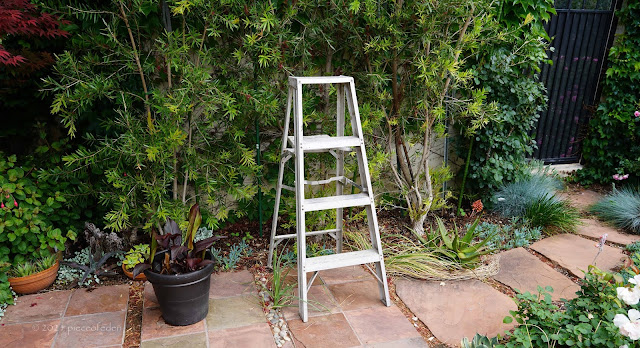 I regret the awkward design of this area every time I look at it.   But every garden has issues.  Dealing with them is part of gardening.

C. viminalis is native to  Australia.  It occurs along the eastern part of Queensland from the Cape York, Queensland south to the northernmost part of New South Wales. There are also populations in the far north and south-west of Western Australia.

It mostly grows in and along watercourses, and so tolerates some seasonal flooding.  This habit adapts well to our California climate--a good deep soaking of winter rain prepares them to grow and flower in early Spring.  'Slim' also benefits greatly from an early spring application of fertilizer:  the foliage becomes a deeper green and the floral display is more lavish.  A nitrogen/chelated iron application benefits foliage that becomes chlorotic.  The species is quite tolerant of our hot dry summers and autumns when the plant is mature and well established

Whole lot of trimming going on... 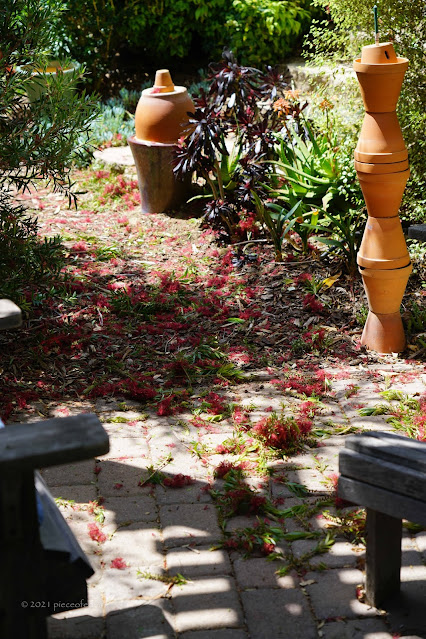 I'm using all the 'Slim' clippings as mulch in less visible areas of the garden.  The flowers decompose nicely.

Another issue on the menu these days are the two Grevillea 'Superb' out front by the driveway.  These plants flower so lavishly and so constantly they did not get what they really need--regular cutting back, which stimulates new growth and makes them bushier and keeps them vigorous.

But there's a problem:  it is really, really hard to cut off so many fresh new flower buds--and once 'Superb' is established, new flower buds are constant.  Cut off flower buds??? Nooooo!   So I neglected cutting them back as much as I should have, and after several years of non-stop bloom, they were starting to look bad, especially the upper plant against the retaining wall.  That was Error #1.

I bought a couple of new 'Superb's, the plan being to replace the old ones and to cut back the new ones regularly. 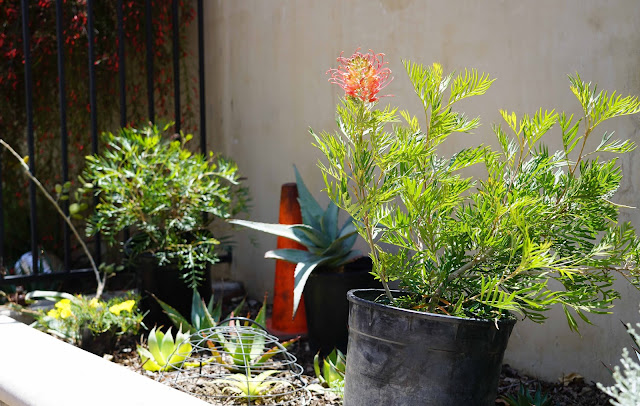 I started in on the upper 'Superb', getting it down to a stump.  There was a lot of dead material to chop off--but also still a considerable number of flowers.  I got strafed by a couple of hummingbirds as I chopped. 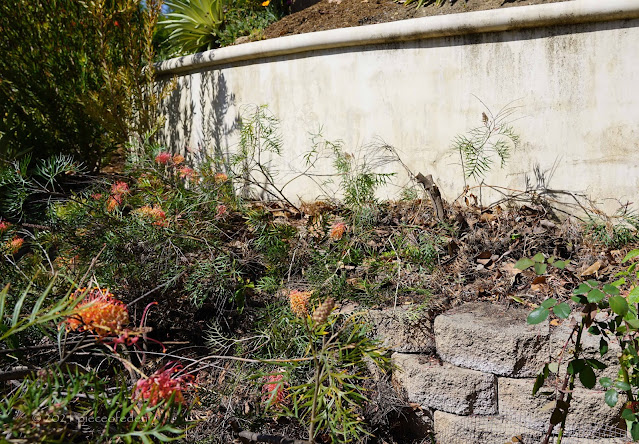 While I took a break, I suddenly wondered if Grevilleas can be hard pruned.  For some reason, I had the impression they were like Lavenders or (non Yew) conifers--avoid cutting into bare stems at all costs.  Well, a quick internet search later, apparently not!

According to the video in the link, hard pruning won't kill them (or at least some of them), and new growth will sprout, so I could have tried that, instead of all the effort involved in digging out the stump.  Error #2.  Too late.  I was committed.

Finally got the old 'Superb' out: 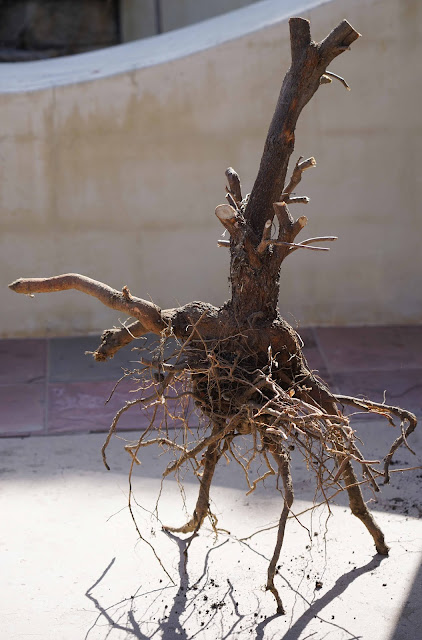 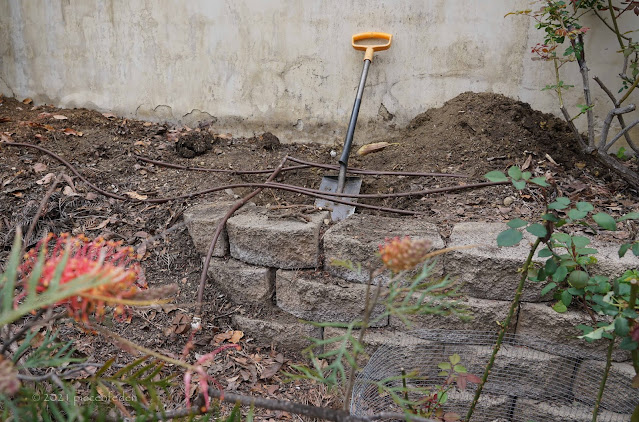 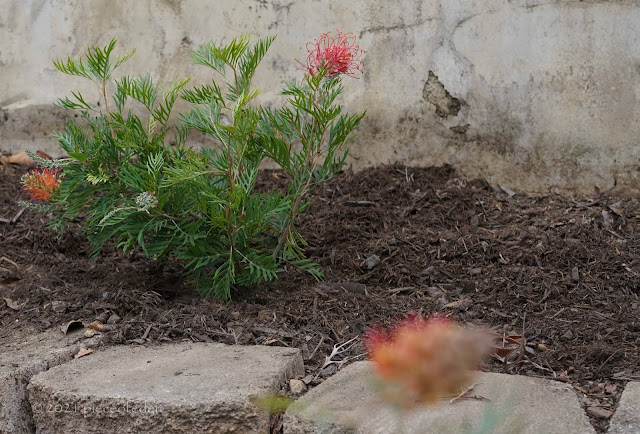 What to do about the old one?  It still looks good from the driveway... 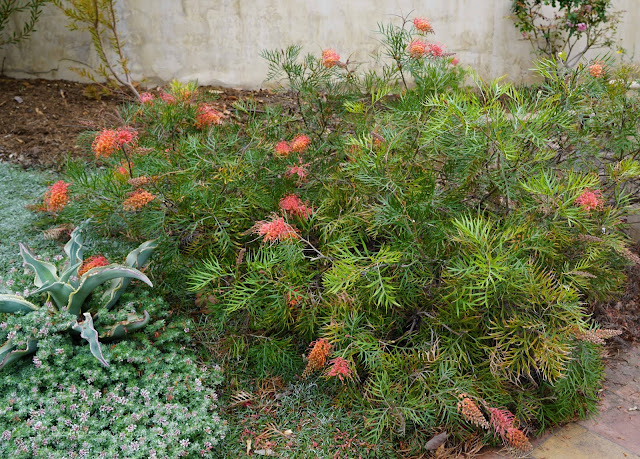 But from the other side. there's a lot of bare and empty: 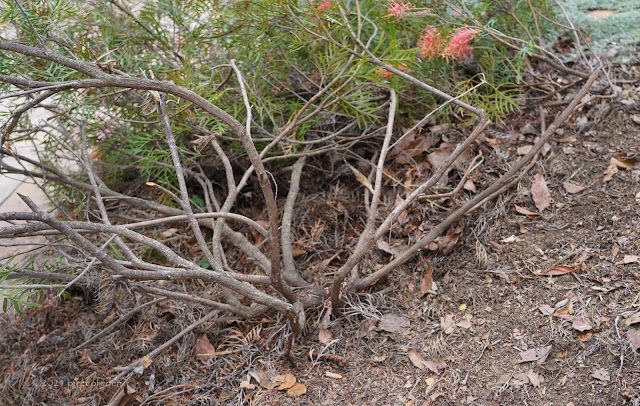 What to do next?  Wait a while, so the new 'Superb' can take over in some way for the old one.   Or, replace the old one immediately, and the male hummingbirds will have to find something else to fight over while the new 'Superb's settle in.

Or, experiment--wait a while, then cut the old 'Superb' down to a stump, to see if it would resprout significant new growth.  I'm very curious to see what would happen.  However, there's not much time for that--by mid-July the growth will nearly stop until the weather cools back down again in October.  Stump it now?   And there's a new 'Superb' that needs a place...I'm undecided at the moment.

There's an amusing amount of irony in one aspect--regarding another 'Superb' in the garden, down in the gully by the pergola.  I'm embarrassed about that 'Superb', so I never blog about it.

The soil appears to be too cold down in that area, or its not sunny enough, so the gully 'Superb' is always chlorotic.  It's gotten many doses of N/chelated iron, which greens up some, but not all,  the foliage, so I'm constantly trimming that plant back--cutting the ugliest yellow off.  It gets the trimming it needs, and is full, dense, and bushy, but it still looks like h-ll, just in a different way. 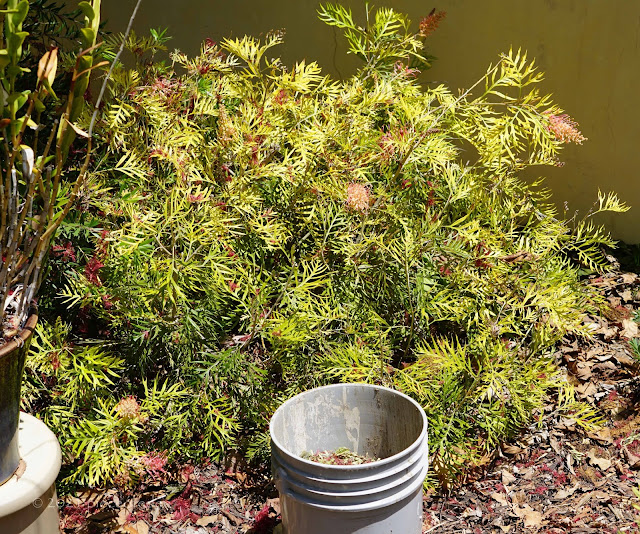 The joke is on me!