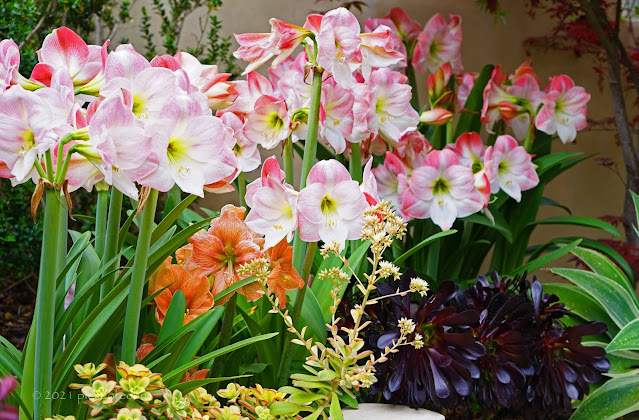 Once upon a time I bought a "Christmas" Hippeastrum bulb, which are intended for indoor forcing in a pot, for floral cheer in December.  Results were poor.  The pot tipped over multiple times and the flower stem flopped and eventually snapped.  For a couple of years after that I kept the bulb in a large and very heavy pot outdoors, where the bulb survived but languished.  I even bought a couple more bulbs at after Christmas prices (90% off).  After a few more years of watching them languish, I planted the bulbs in the ground, where every year since they put on a big April show and have multiplied.  A bigger and longer show than fridge-chilled tulips, and so much easier.

Hey shouldn't you be social distancing? 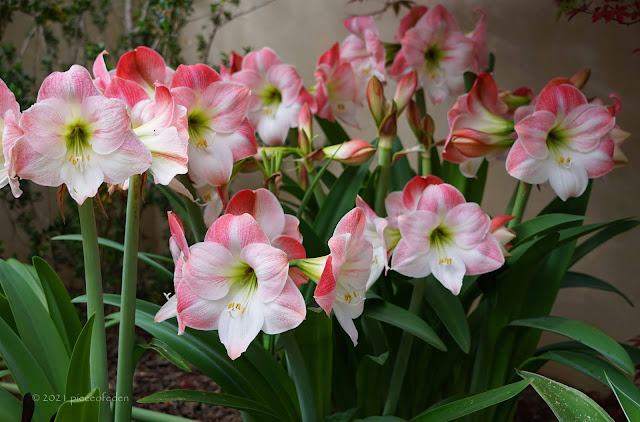 The 'Emperor I' Acer palmatum suddenly seems to be a tree, albeit a small tree, rather than a slim stick with a few pretty leaves on it.  We did have a couple of rainy years within the past three--that must have done it. A taller Acer also nicely screens out the uphill neighbor's house from the pergola. 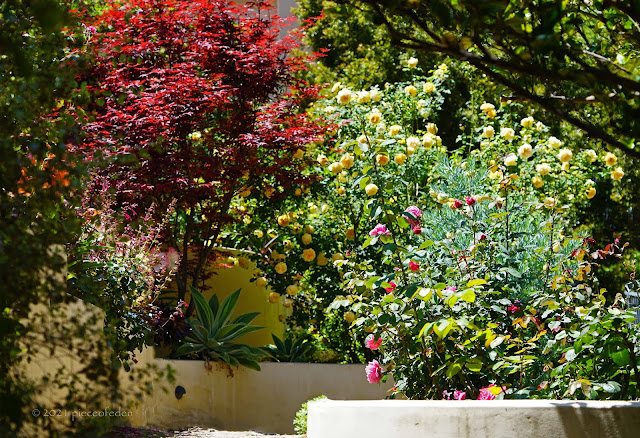 The Acer is now finally taller than the 'Golden Celebration' rose, which is no more than 7 or 8 feet tall this May.  The scene is further altered this year by the increasing height of the 'Icee Blue' Podocarpus. 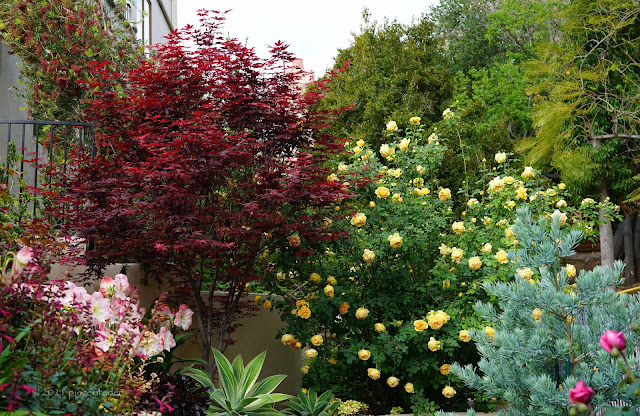 The older, larger Acer, 'Oshio Bene' is behind the wall.  'Emperor I' is said to be a better performer in our climate, an iffy one for Acer palmatum.  In its location the roots are completely shaded, surely beneficial. 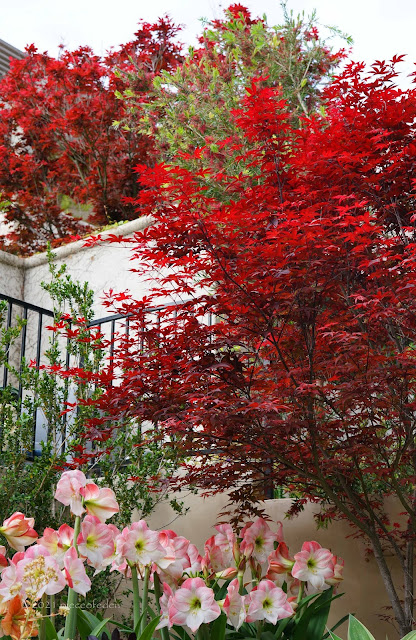 Getting a good photo of 'Golden Celebration' is tricky--the backgrounds, which mostly include the neighbor's junk and weed-tree collection, are hard to omit.  I did my best. 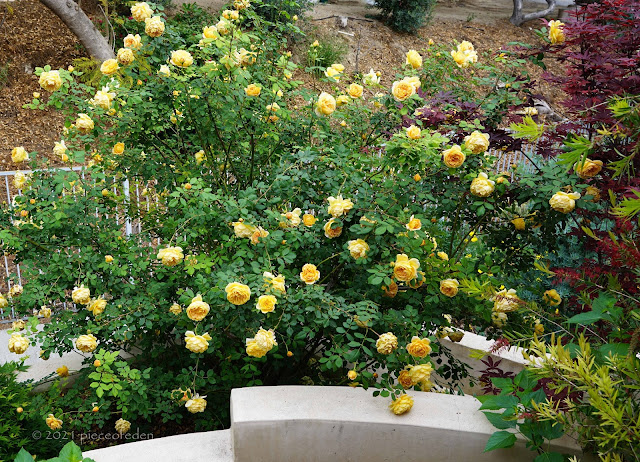 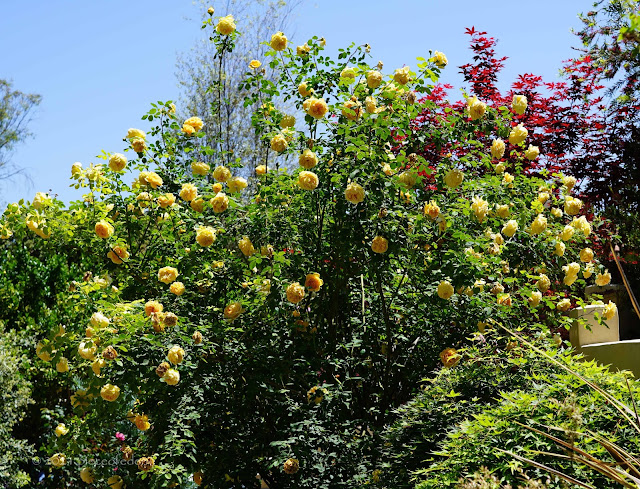 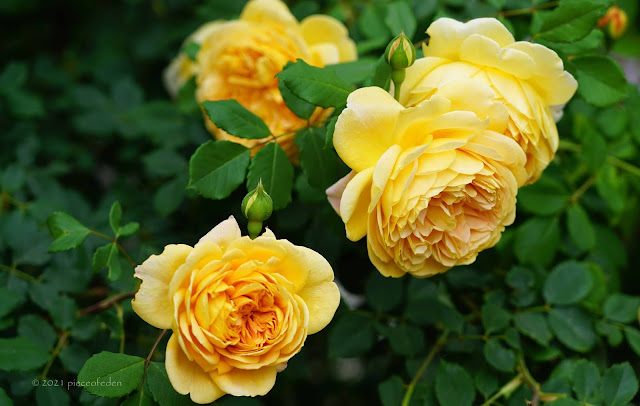 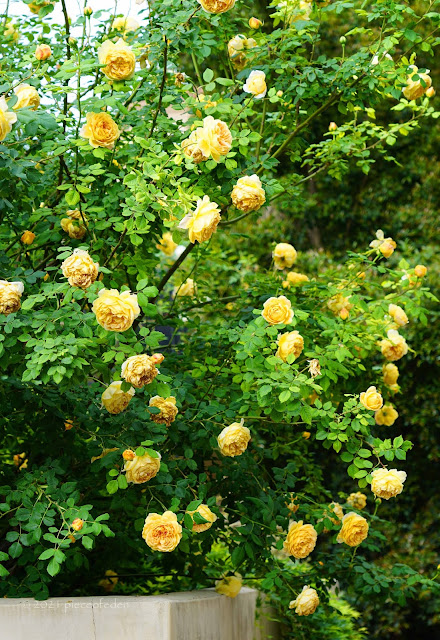 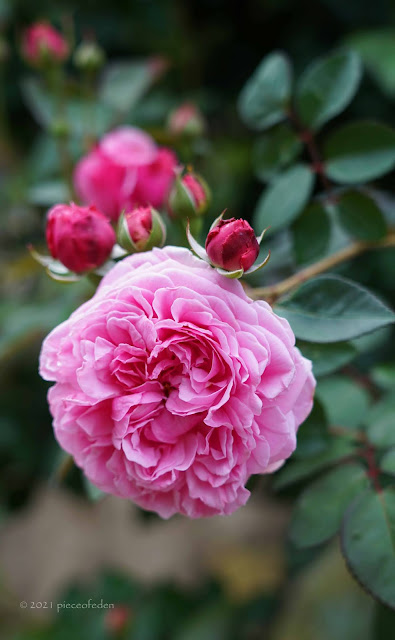 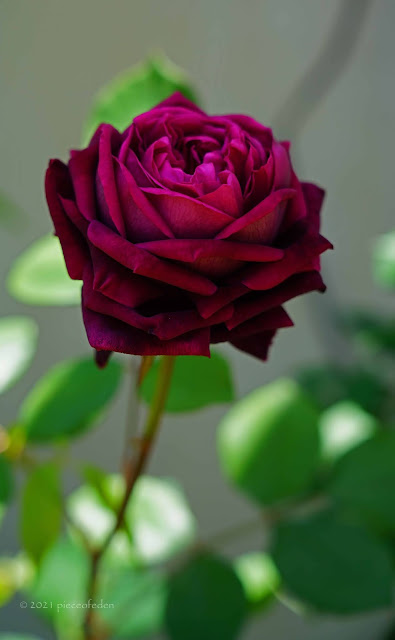 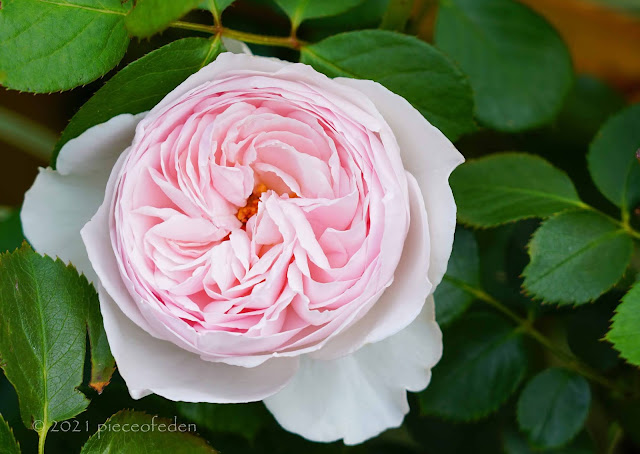 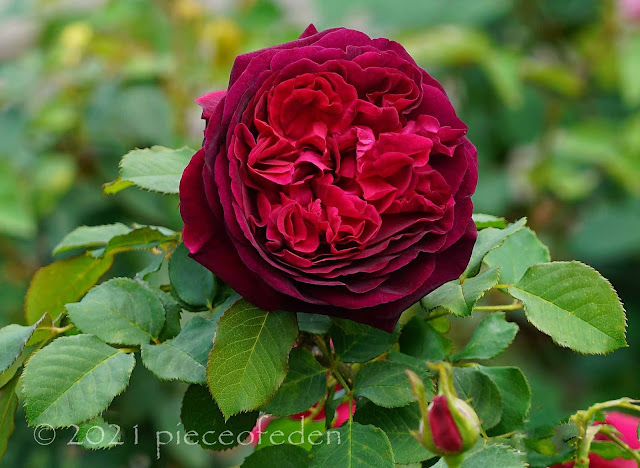 While we're on the subject of roses,  the local Red Tail Hawk made a meal of one of the rabbits eating mine, in one of her favorite dining locations: 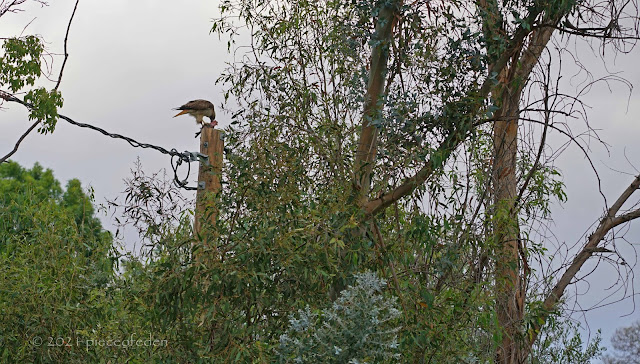 A quick weekend jaunt to a local nursery provided some small temporary filler plants for the empty area around the two new 'Golden Celebrations'.  When the roses grow larger, the fillers will either be moved, or if short-lived, will already be gone. 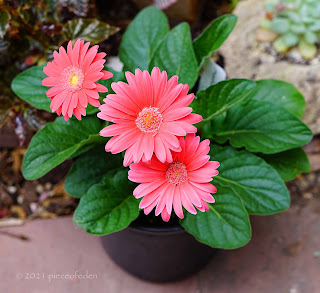 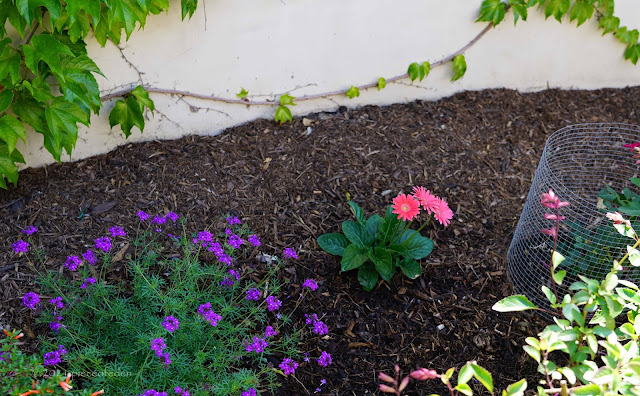 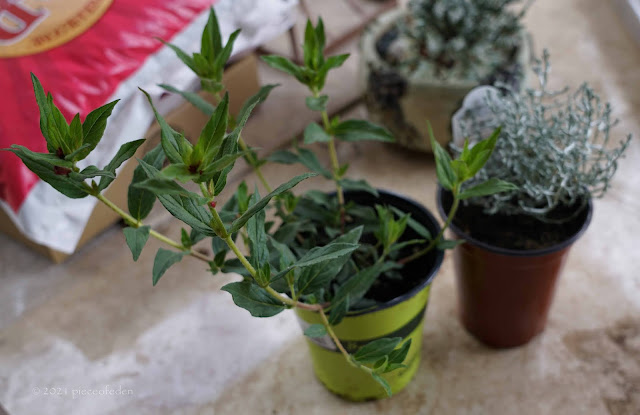 Re-learned a lesson after a brand new Calylophus got eaten to the ground:  provide rabbit guards for brand-new plants.  The Red Tail has not eaten all the rabbits quite yet. 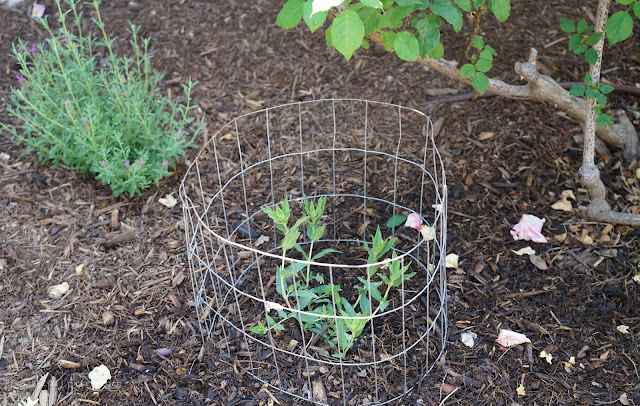 The Leucophytum planted in the gap between the screened rose and the salvia. 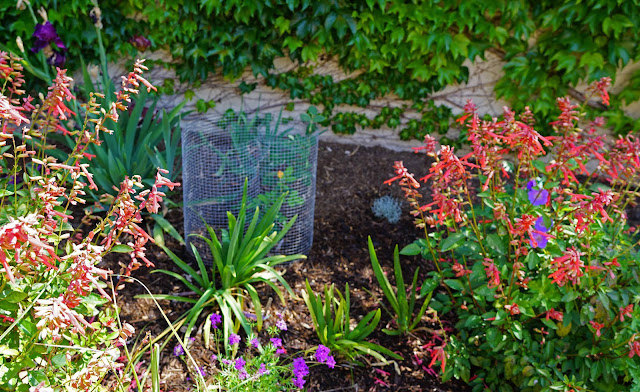 Out on the front slope, another surprise besides the Boophone.  Not only does the very reluctant Hesperaloe have a flower stem, it now actually has four flower stems.  The effort to better irrigate it produced results. 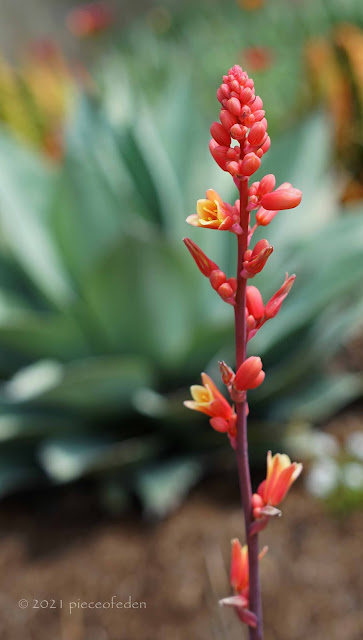 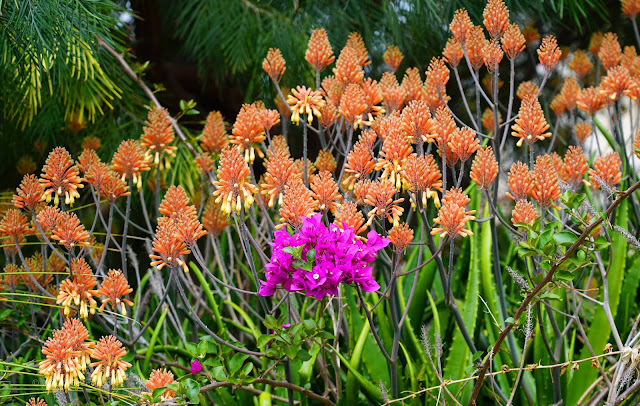 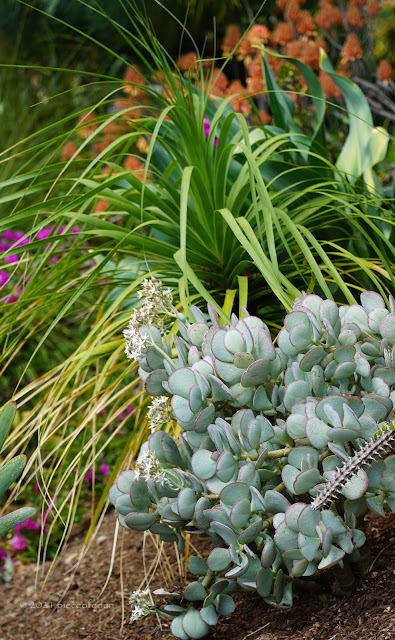 Flowers on the recently planted Didelta.  I was not expecting any. 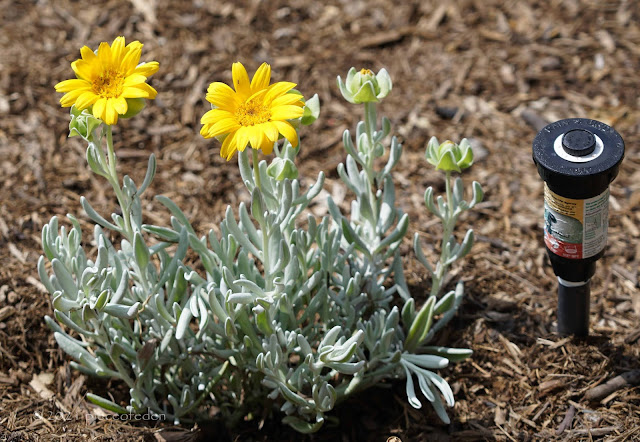 Back among the roses, Clematis are starting to flower.   'Angelique' 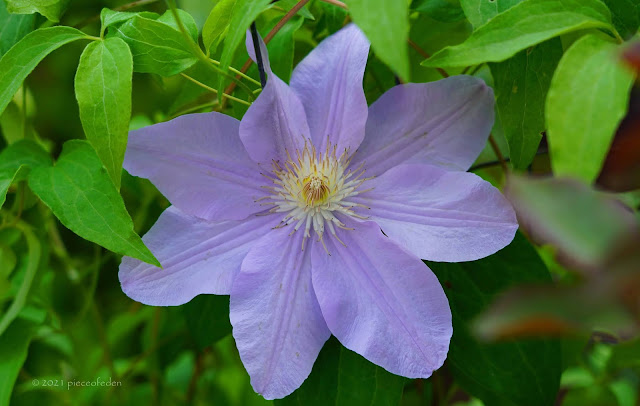 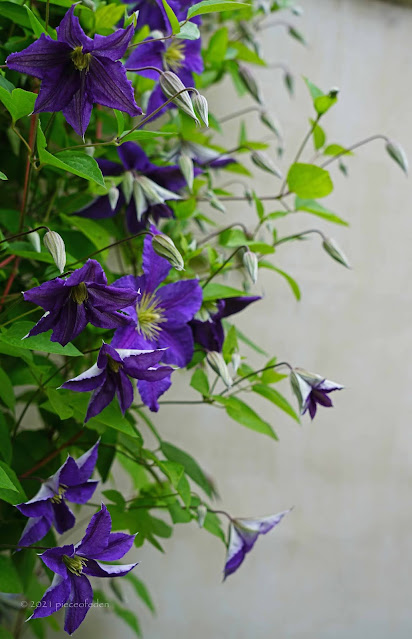 Jackmanii peeking through a wall window. 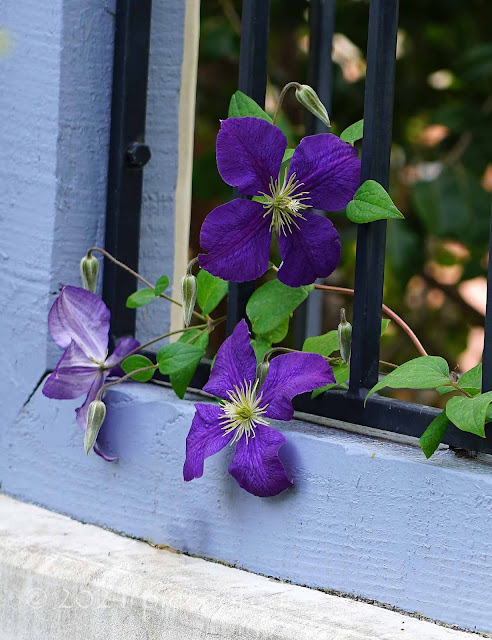 Not much in the way of April showers this year, but we did get May flowers anyway. 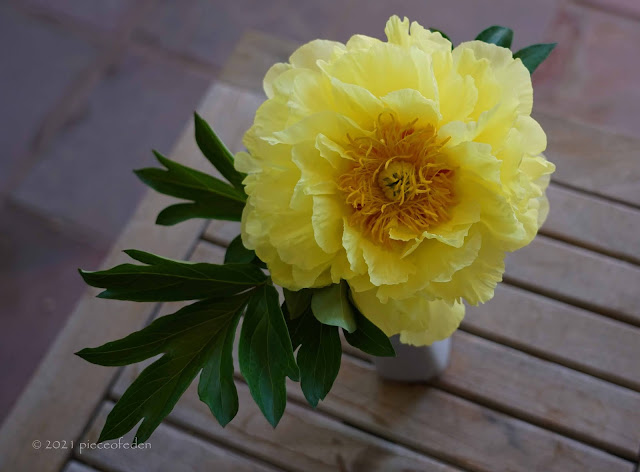