I went out to photograph the neighbor's Agapanthus.  They looked striking paired with the bronze new foliage of Rhaphiolepis indica.  Meanwhile, up in the sky... 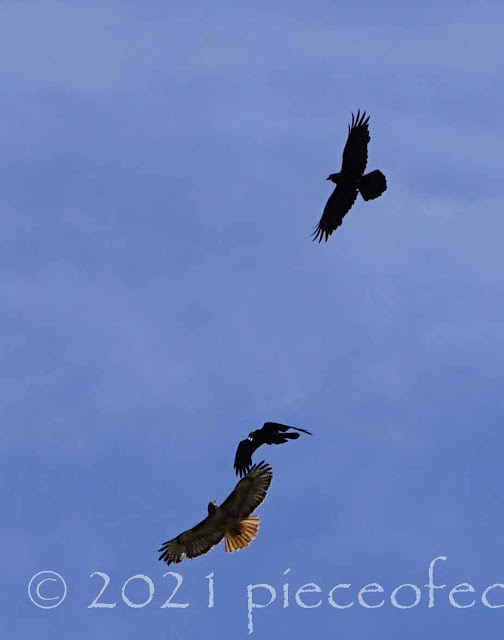 Above it all, crows harass a Red Tail Hawk

Harassing a Red Tail can be dangerous.  While the crows nearly always maintain enough distance, a neighbor found a mangled, dead crow on her driveway.  Perhaps one crow dared to fly too close.

Also far above the neighbor's Agapanthus, Agave marmorata flowers began to open.  While they turned a brilliant yellow at least a week ago, the signal that some were opening would be the arrival of bees and nectar feeding birds.

I took the camera out to get some photos, and by great good luck, caught Orioles feeding on the first open flowers.  That particular branch of flowers tilts to the side just enough to give me a good view.  Dad in front--is that a fledgling son with him?  The juveniles appear to spend a bit of time post-nest with Mom & Dad, learning the ropes of survival. 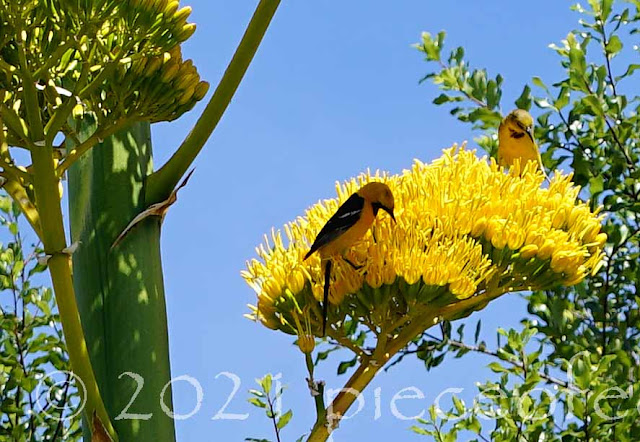 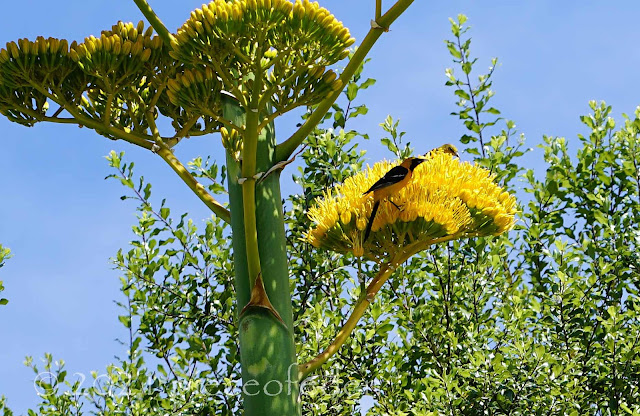 Mama Oriole was more discreetly feeding from the 'Moonlight' Grevillea nearby.  Luck was not with me to get a photo of her.

Agave marmorata has a child of her own, on the other side of the garden.  Still small in comparison to Mama Marmorata, though hardly small. 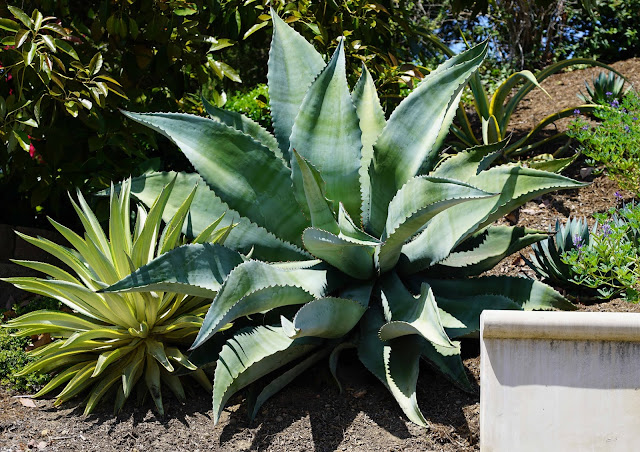 Walking around looking at the Agave flower stalk from different angles... 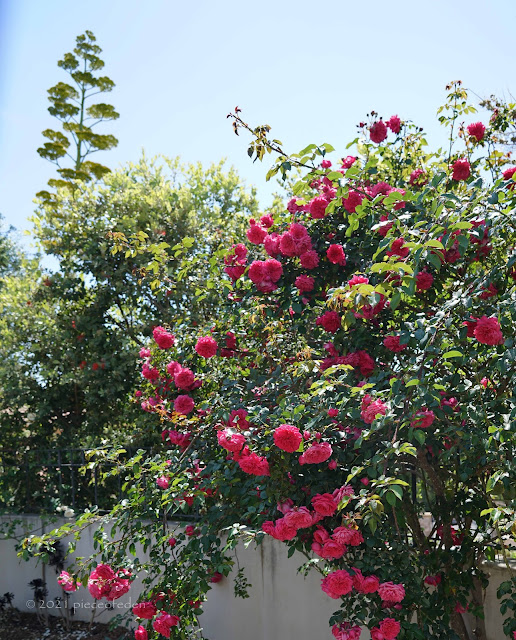 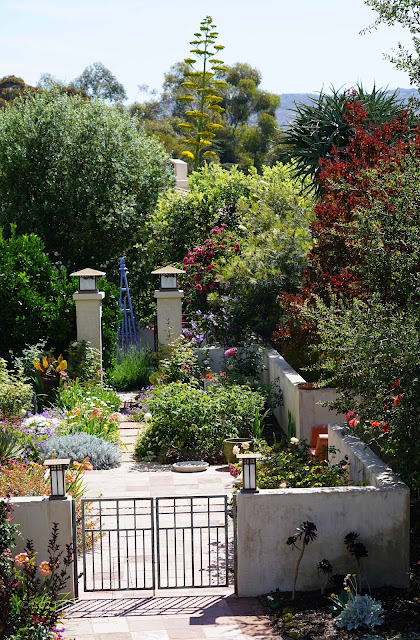 ...I was also lucky to get decent shots of a hummingbird at Salvia 'Waverly'.  While 'Waverly' is an overly vigorous beast of a Salvia (though to its credit, it does not spread everywhere, like 'Amistad' or 'Black and Blue'), it remains in the garden because the female and juvenile hummingbirds frequently feed from it.  'Waverly' flowers year-round here, making it especially valuable.

While the feisty males make war over the Grevilleas, the females and younglings have a plentiful, uncontested supply of Salvia nectar. 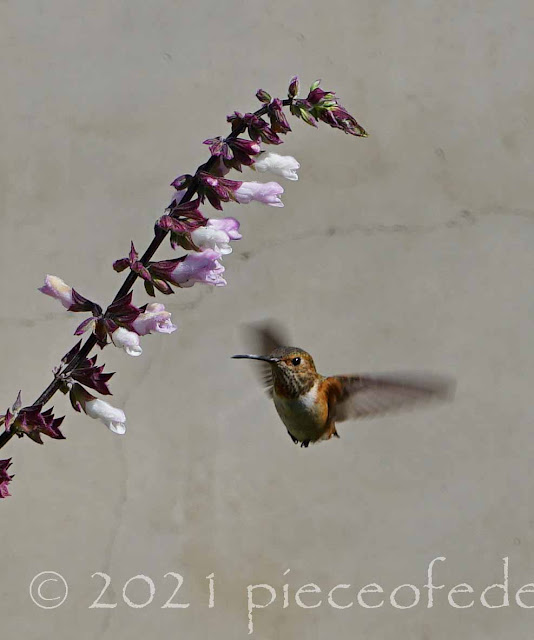 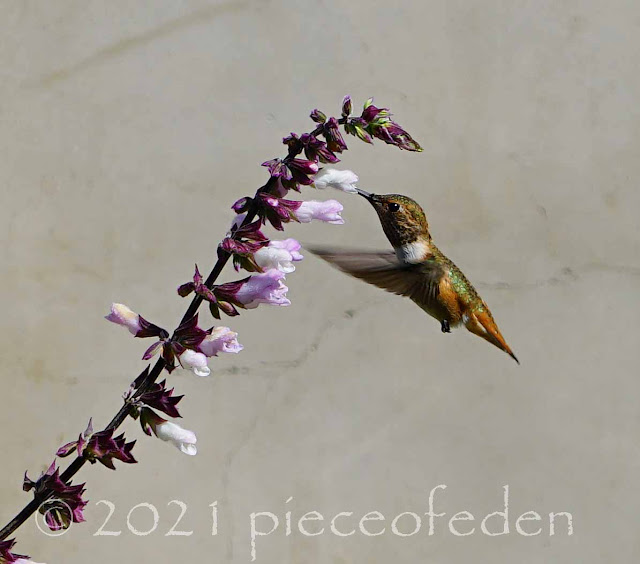 Still awaiting the opening of Agapanthus 'Black Pantha' in my own garden.  Any day now: 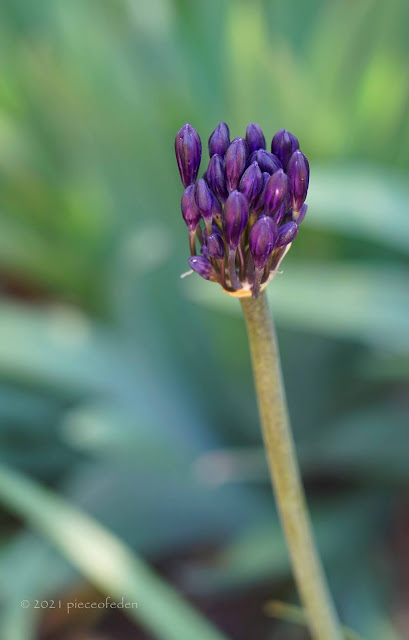 The long-wanted 'Graskop', obtained last year, is healthy and growing, with no sign yet of whether it will flower this year or not.