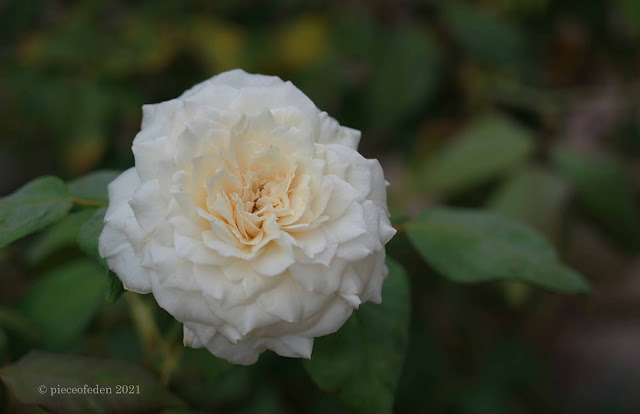 Not flowery month.  It's been hot, and our dry winter meant plants have less reserve strength.  A few have died. 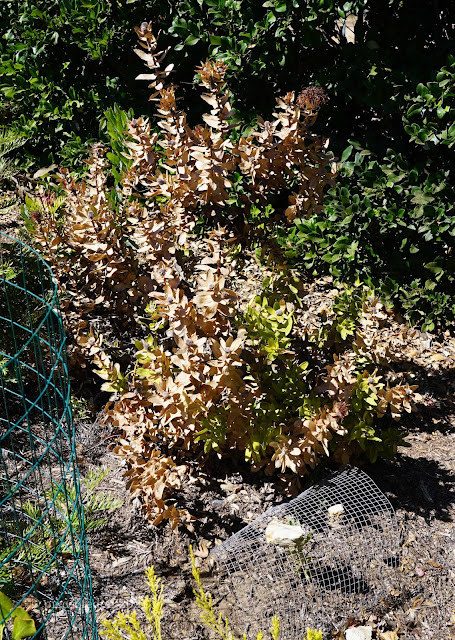 One of the screening Pittosporum tenuifolia selections. 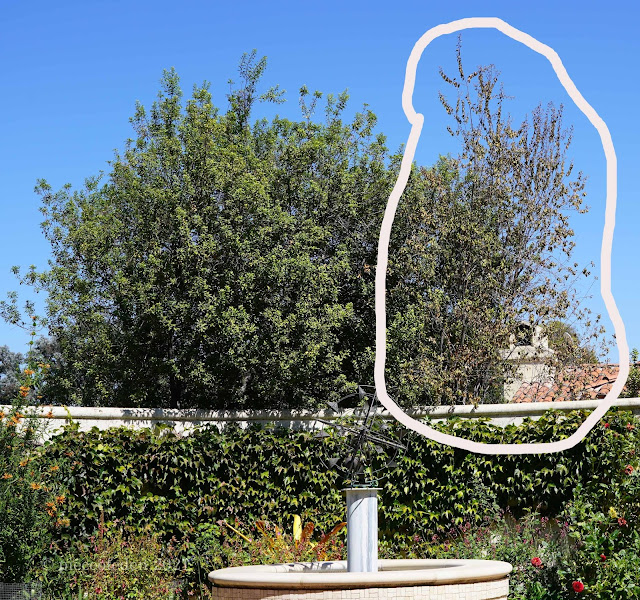 Several large branches on it died last year, so this isn't a surprise.  Unfortunately just as it screened out the neighbor's bathroom window, the screening branch died.  And now, the rest of it.  Too hot, too dry. 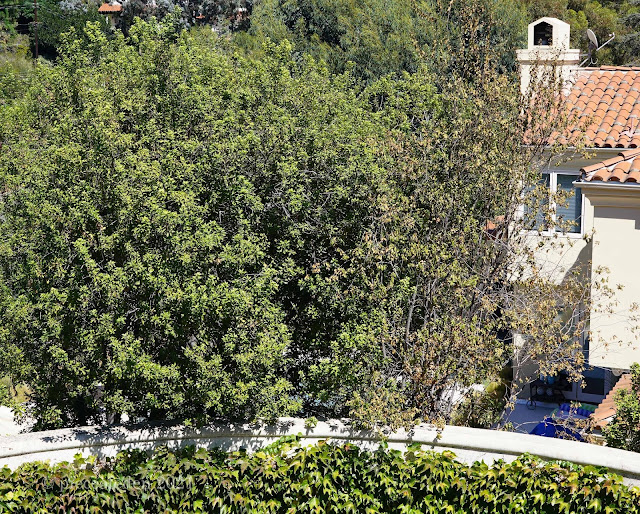 And one of my very favorites, Centaurea ragusina.  It was several years old, so also not a surprise.  I fear it got too dry, though this plant is probably not long-lived.  I replaced it right away with three Graptoveria 'Fred Ives' rosettes laying around.  They actually look better in the spot (lower left, indicated by arrow): 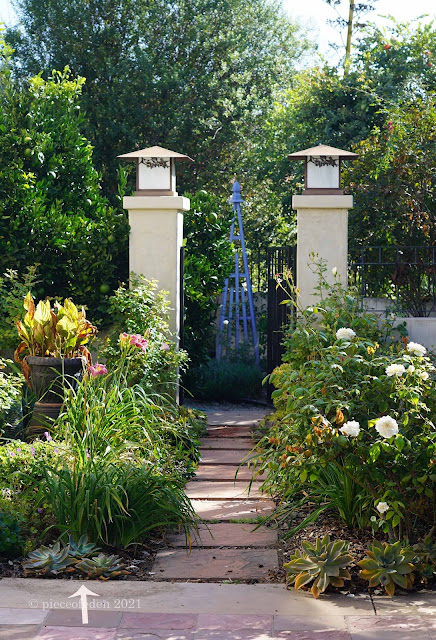 The Centaurea's foliage was so brilliantly white-silver, it distracted from everything else.  There are two others in the garden to enjoy.

Best to forget losses and focus on flowers. 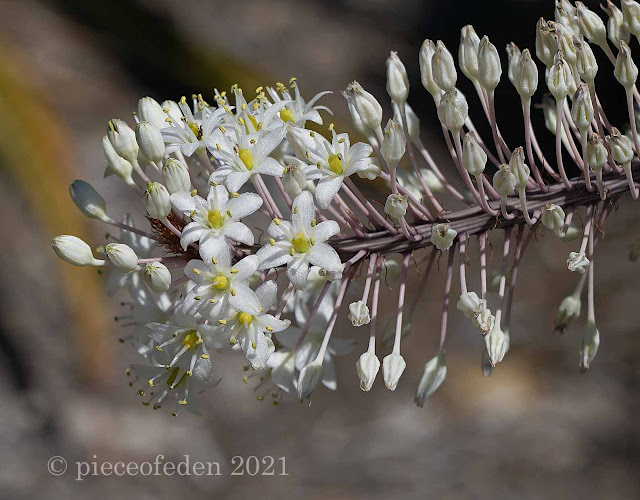 This Drimia bulb announces it has split into two by sending up two flower stems: 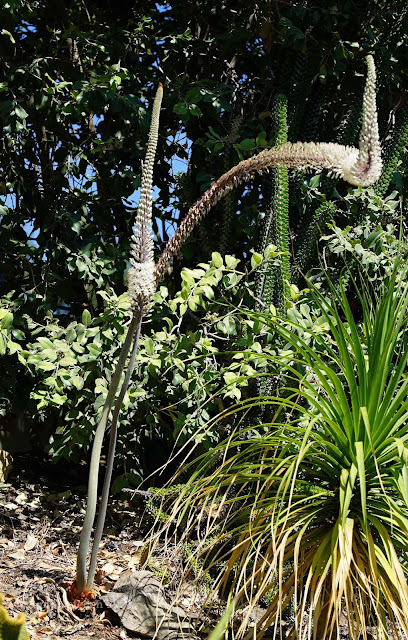 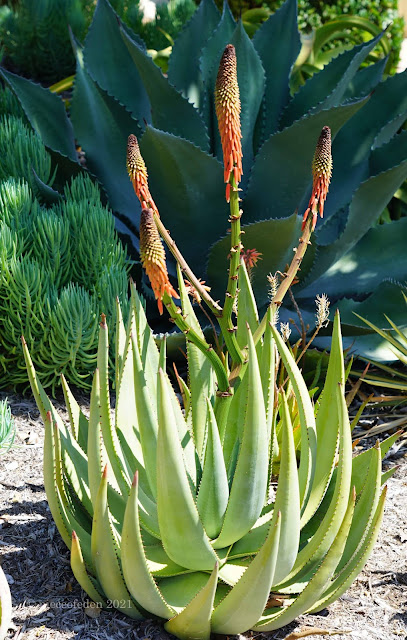 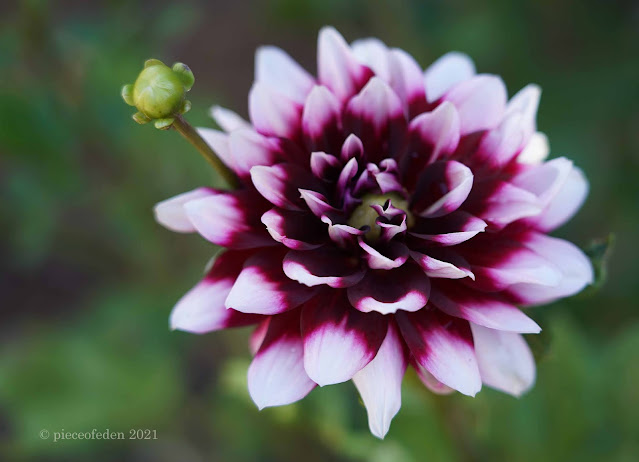 Dahlia 'Holland Festival', flopping but supported by one of the 'Ebony' Crape Myrtles: 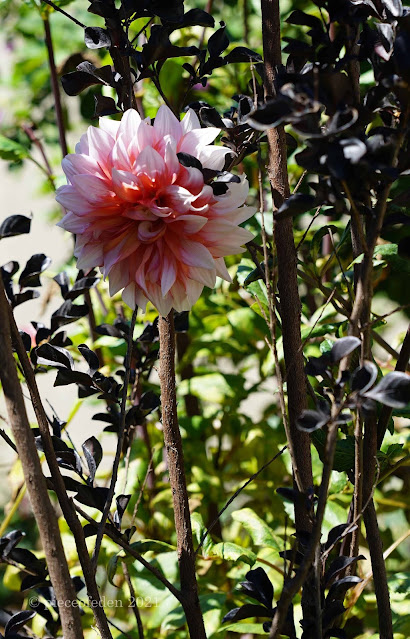 The 'Ebony' Crape Myrtles grow slowly.  They also flower slowly--a little at a time, instead of all at once.  Not a bad thing. 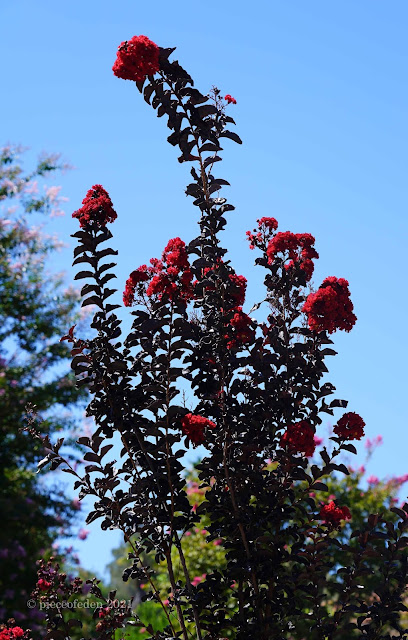 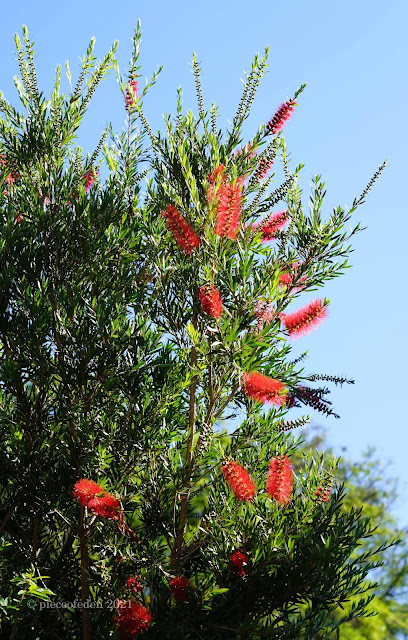 A couple of Proteas.  'Brenda', a little past prime (too hot to go outside for a few days--missed this one's prime)... 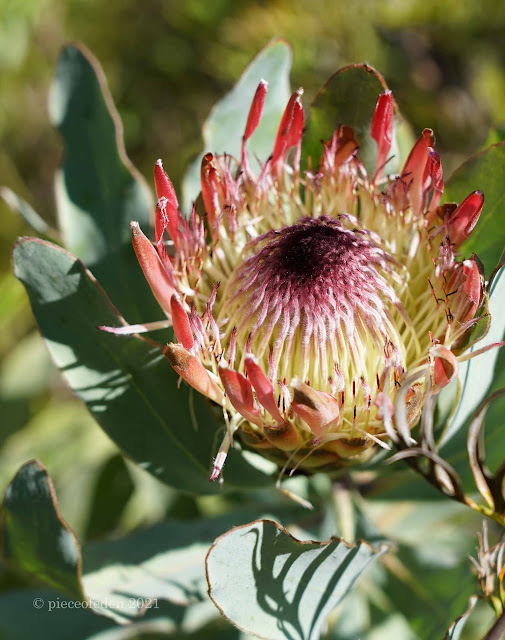 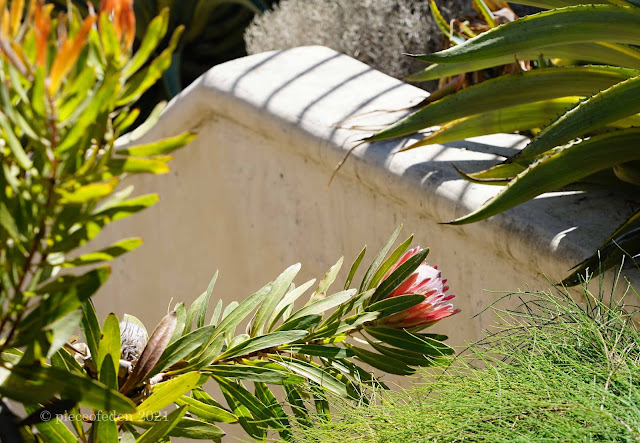 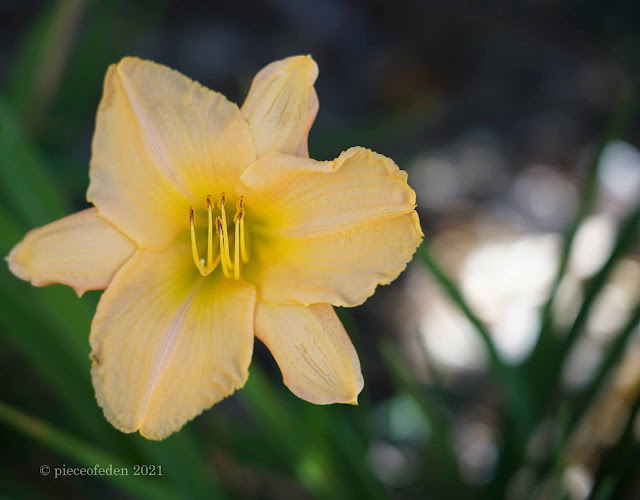 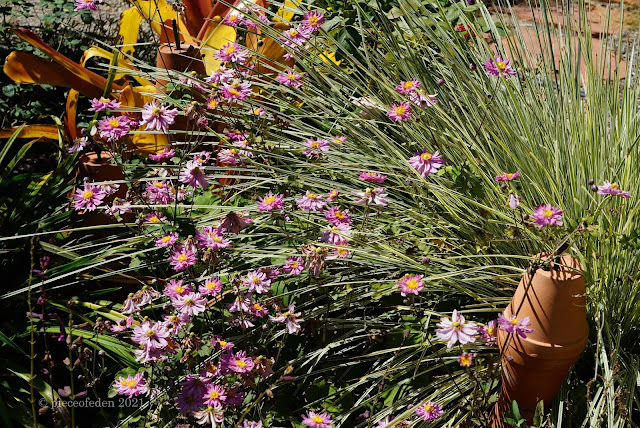 What has managed to overcome the heat, surprisingly, are the long-established roses. 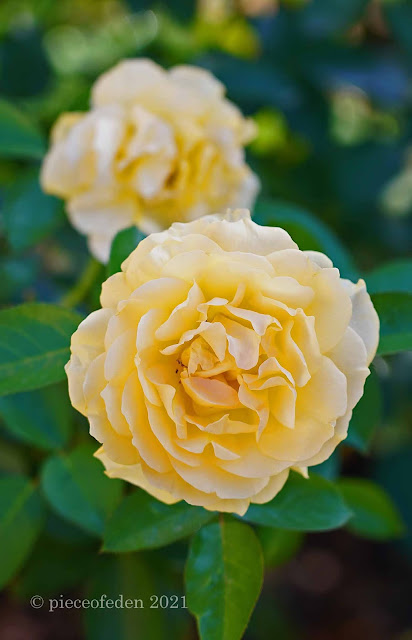 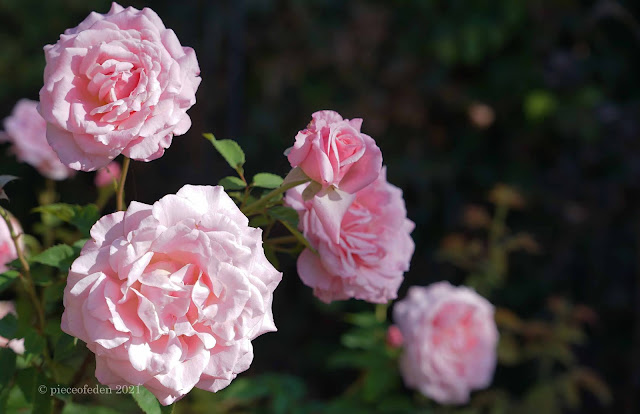 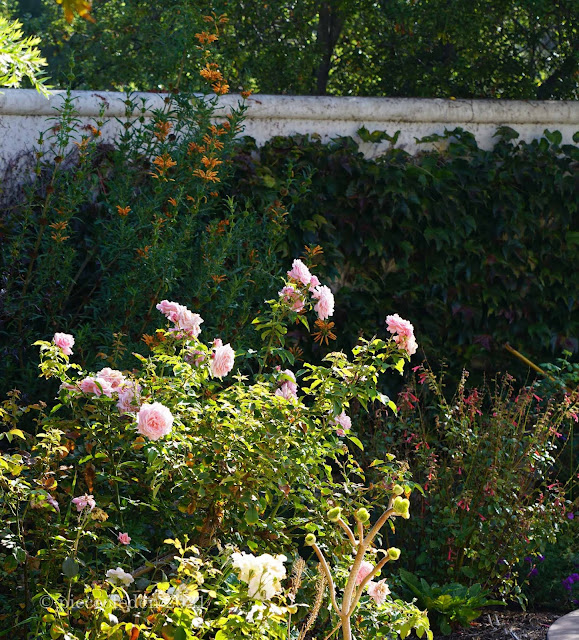 'Ducher'.  This one is actually new this year.  The flowers are smallish.  A China rose introduced in 1869: 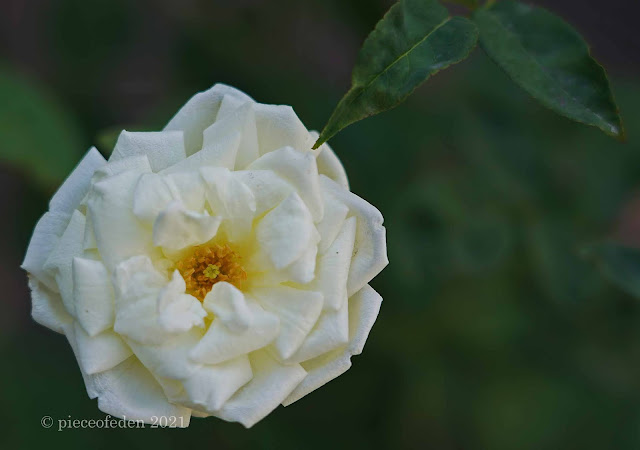 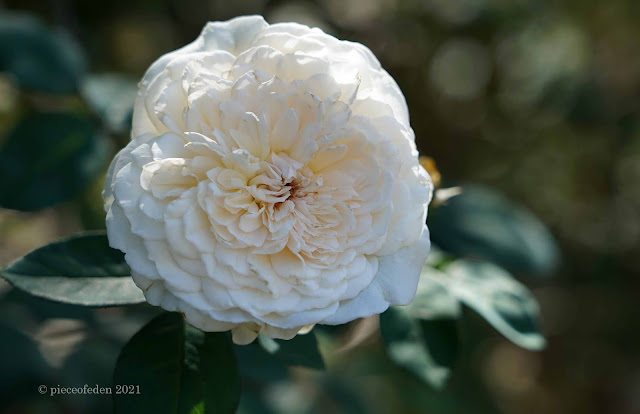 The nights are starting to cool off.  The light is becoming more slanted and softer, creating shadow patterns and rich contrasts. 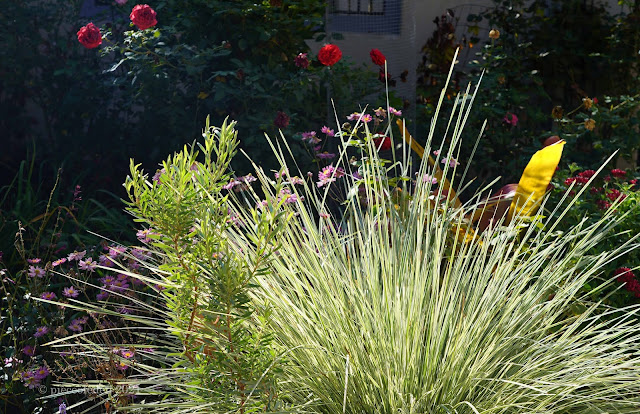 Autumn is on the way, hooray!   More Bloom Day posts from all over via meme host Carol J. Michel.  Click on for links to more September flowers.