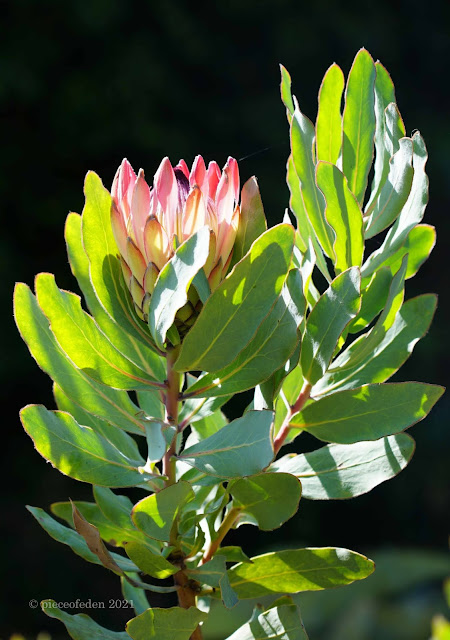 A few days of cooler weather prompted activity in the garden after a week too hot for it. 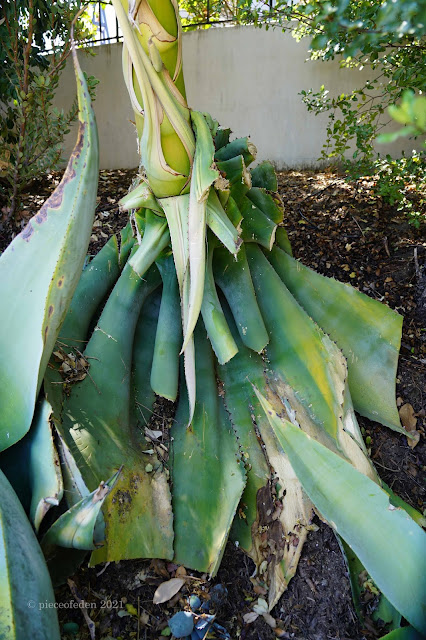 Continued chopping at the bloomed-out Agave marmorata.  The leaves, many as long as five feet, each weighing about 20 pounds, require much effort to saw off and trash. 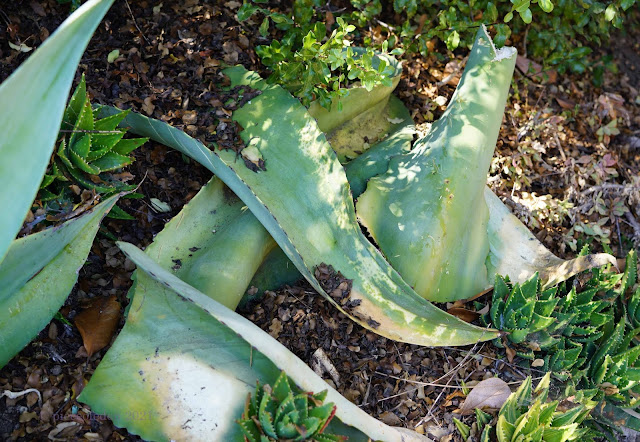 The flower stem will be an additional level of difficulty: 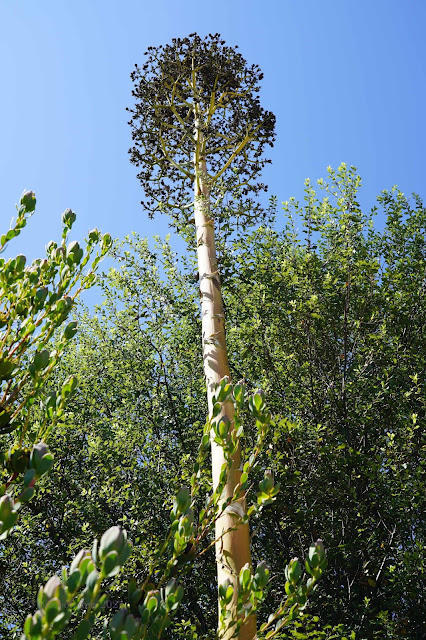 Chopped down the dead Pittosporum.  The stump awaits. 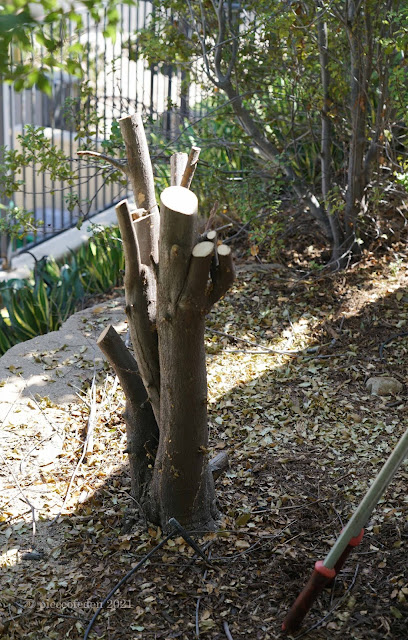 There is some urgency to remove the stump.  I want to replant something ASAP to privacy-screen out the neighbor's bathroom window.  Leucadendron 'Chief' purchased and waiting for the spot, but more Callistemon 'Slim's may be a better choice.

The Leucadendron could instead get the place currently occupied by a small (3'/1 meter wide) offset of the monstrous Agave marmorata. 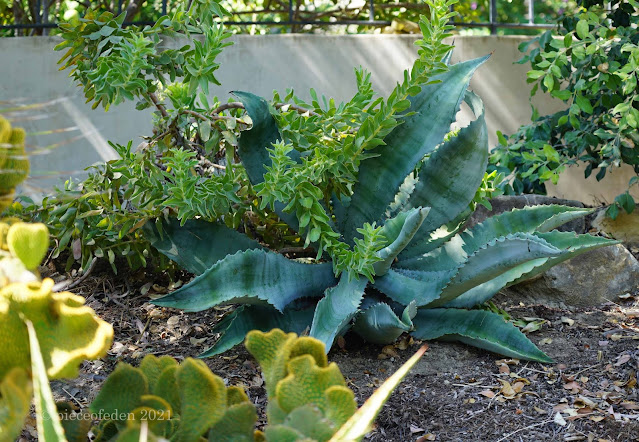 The offset is coming out.  Too much effort is involved removing a full-grown bloomed-out A. marmorata.   A previous offset is nearing full size on the west slope,  where it will eventually bloom.  Two monster removals are sufficient.  Actually,  one is plenty. 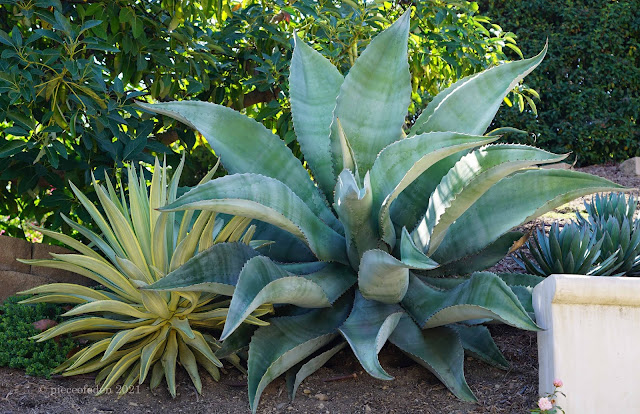 Trimming back Lavender 'Provence' into a tidy bun was easy, and deliciously fragrant work.  Its bald spot filled in nicely.  I left trimmings scattered around to step on, releasing sweet scent again and again. 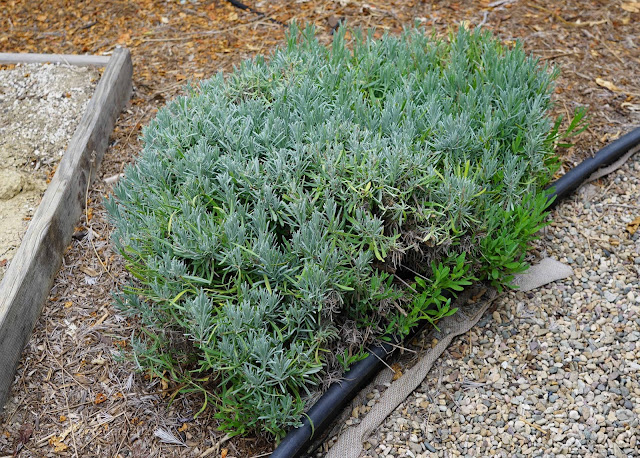 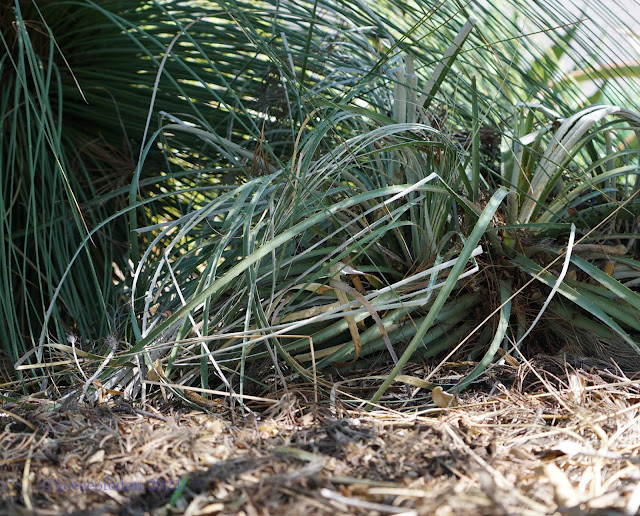 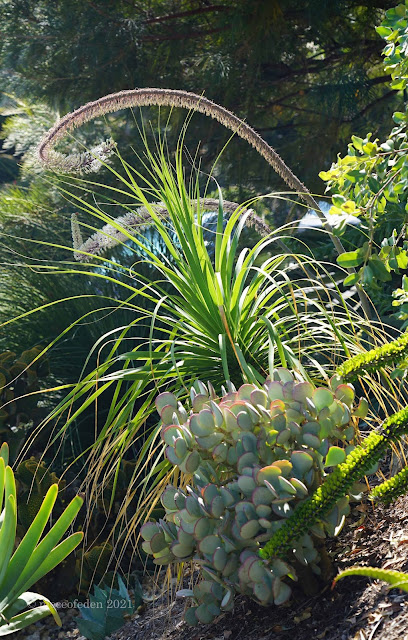 ...and on a recent re-visit to Plant Depot in San Juan Capistrano: 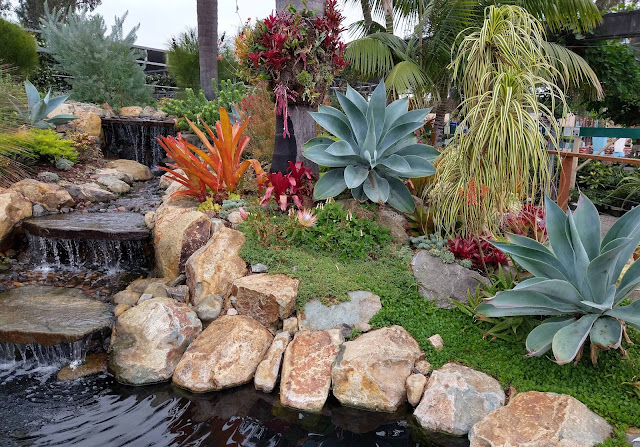 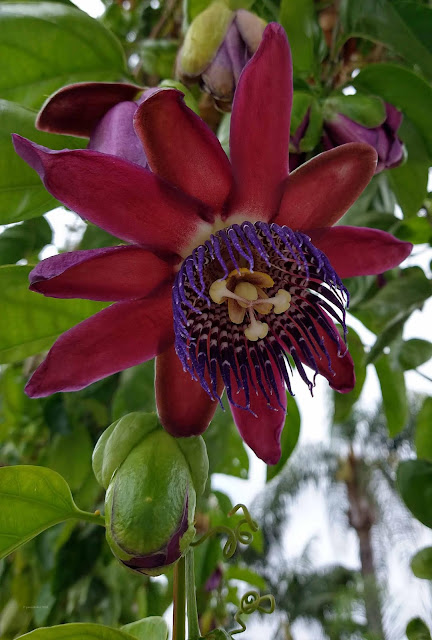 My guess is this is a hybrid called 'Purple Tiger' due to the fact that the ends of the filaments become wavy as they mature (not mature enough in this photo to wave): 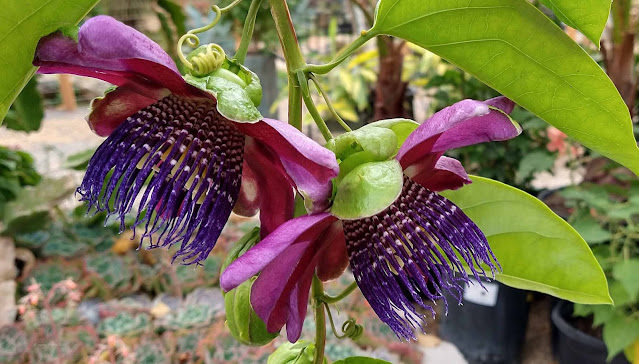 A quick arrangement in silver and lavenders: 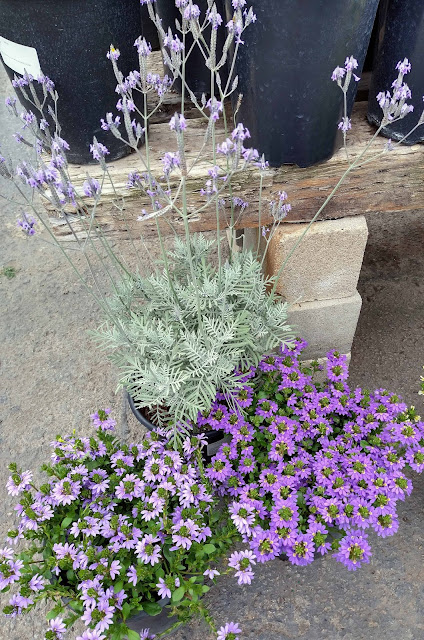 New to me Grevillea 'Little Honey' has coppery flowers: 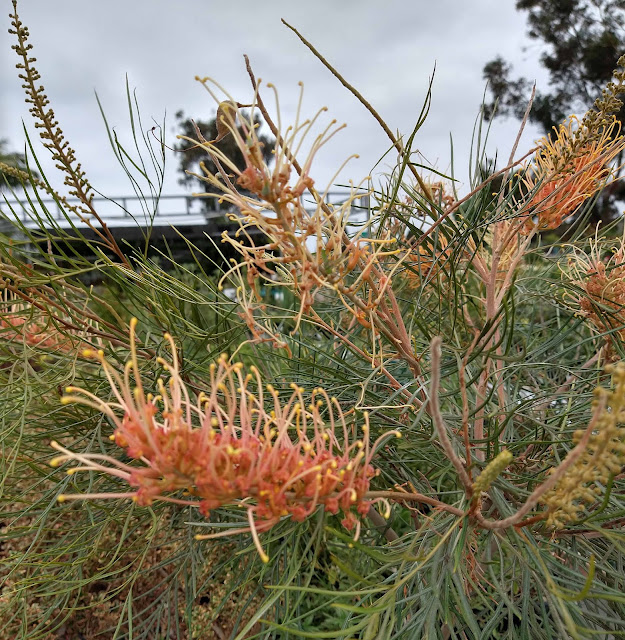 Cyperus of some sort against marine-layered sky: 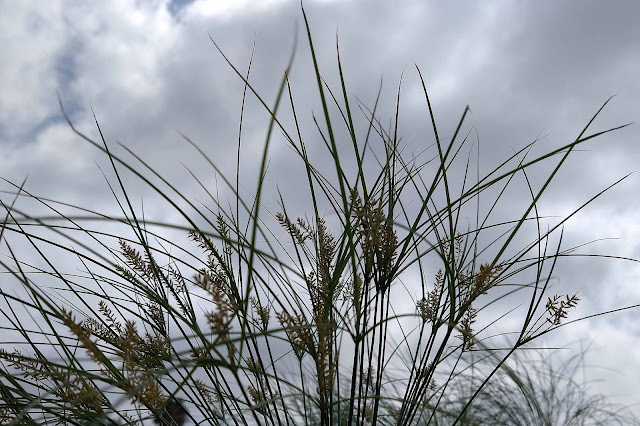 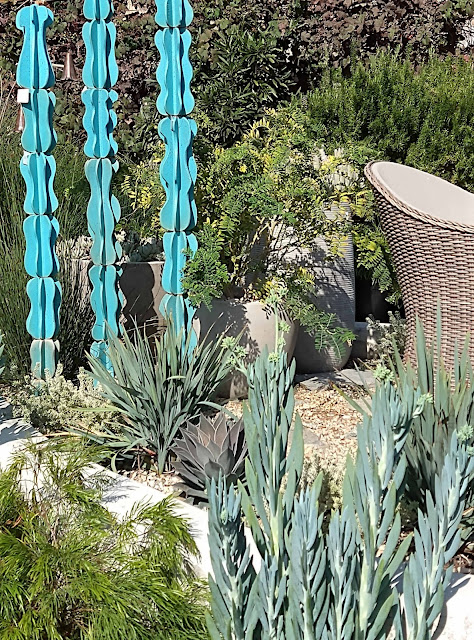 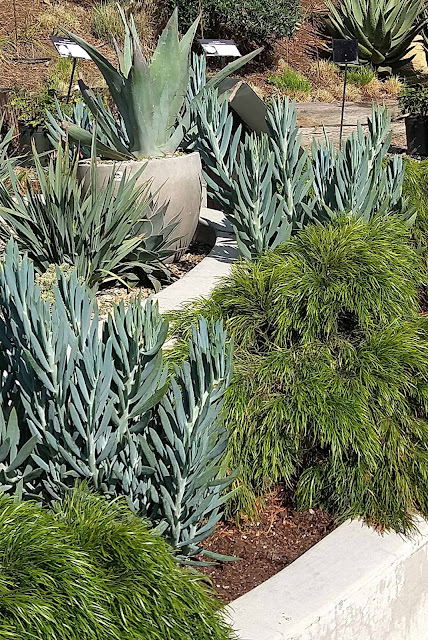 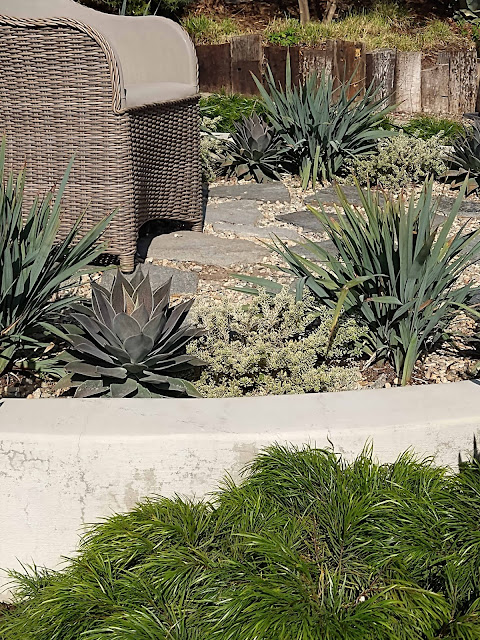 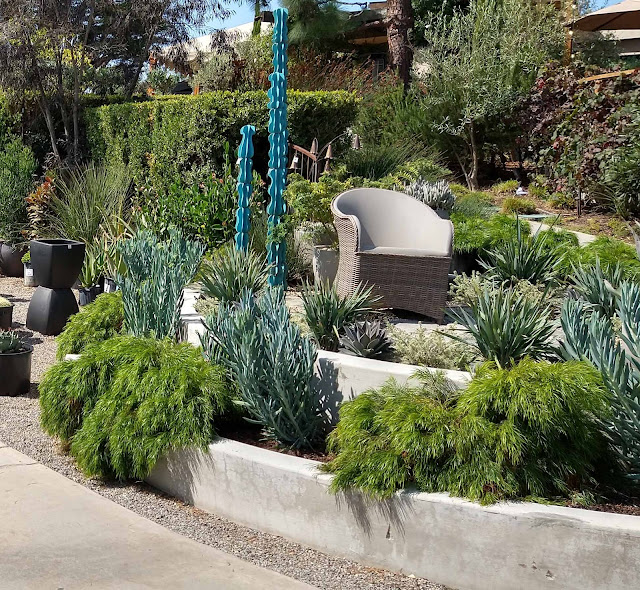 I was there for a garden club meeting and plant talk.  Tired of sitting, I slipped away to see the decorative Octopus recently blogged about by Late To The Garden Party: 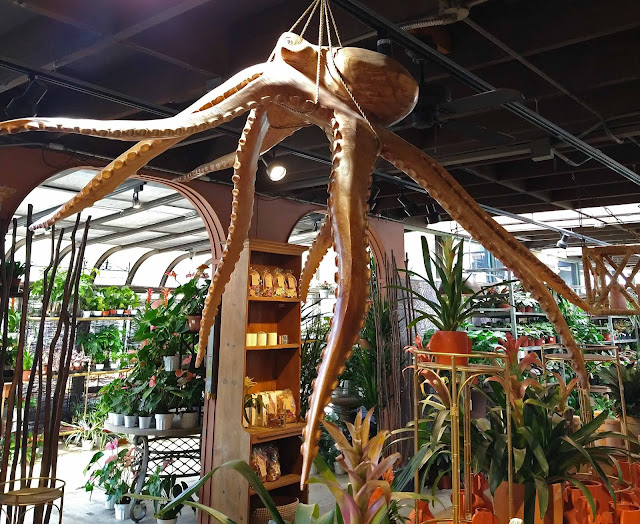 I was gobsmacked to discover what it appeared to be  crafted of:  a single piece of wood!  Either the stump of a tree carved and polished into an octopus shape, or the area where the trunk of a tree splits or forks into branches.  There were growth rings visible on the underside of the "octopus". 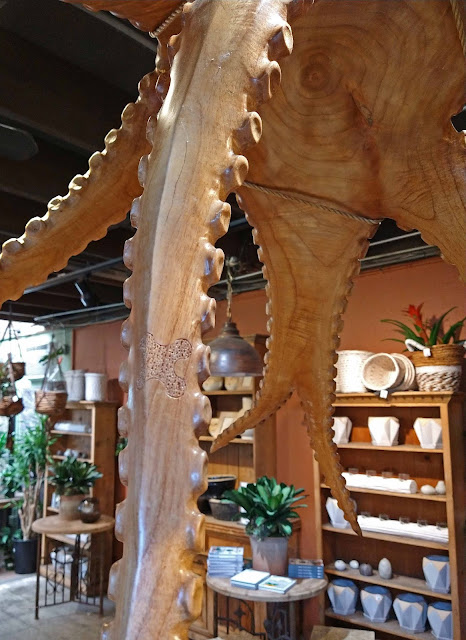 What a cool thing it was.  Imagine some decorative object today not made out of plastic.  Yours for (yikes) $995.99.  You must admit a lot of work went into it: 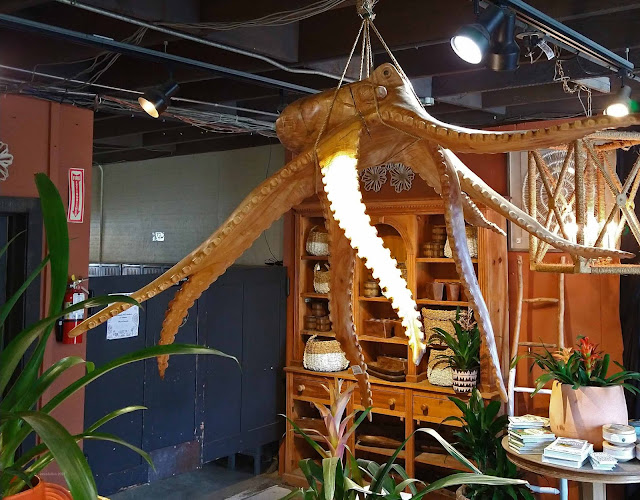 It was fun to be surprised.  Perhaps the Puya and the towering Agave flower stem waiting for me at home will be easy to get out after all.