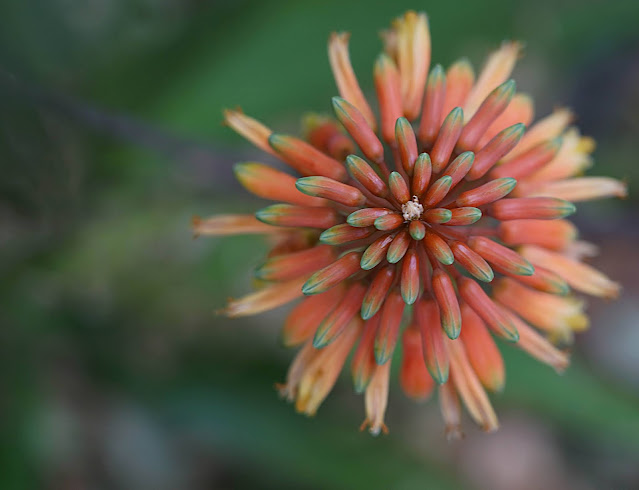 I didn't forget this one, Aloe rubroviolacea, rubro-ing up for the winter: 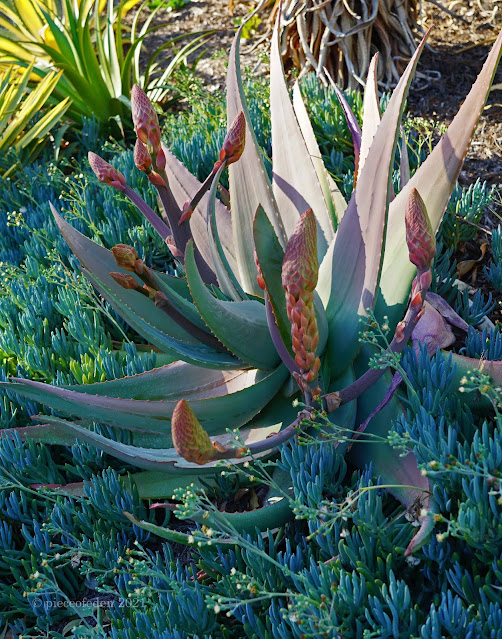 Also did not forget Kumara (Aloe) plicatilis.  However this photo somewhat better shows the trunk and branching of the plant: 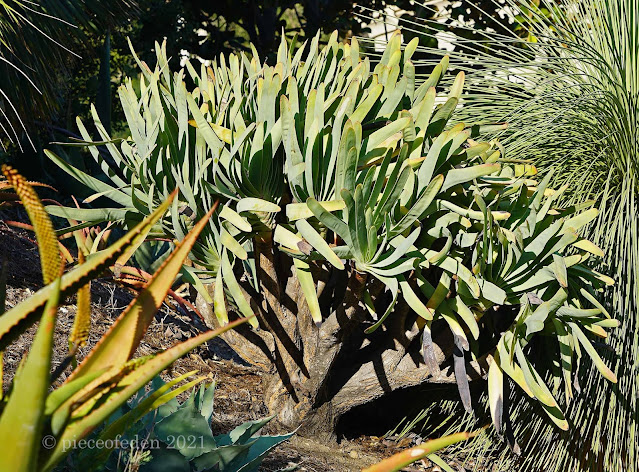 Omitted:  A. wickensii:  a Graptoveria flower leaned up against the Aloe, a hint to encourage the Aloe to flower.  Although it is blooming size, it never has. 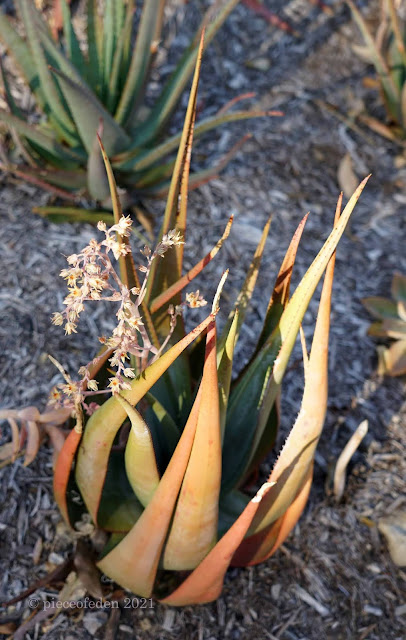 Forgotten:  Aloe deltoideodonta 'Sparkler'.  This gorgeous smaller Aloe weakens and is stressed by even our mild winters, so I've been growing it potted on the patio where winter is warmer and drier--well, at least drier: 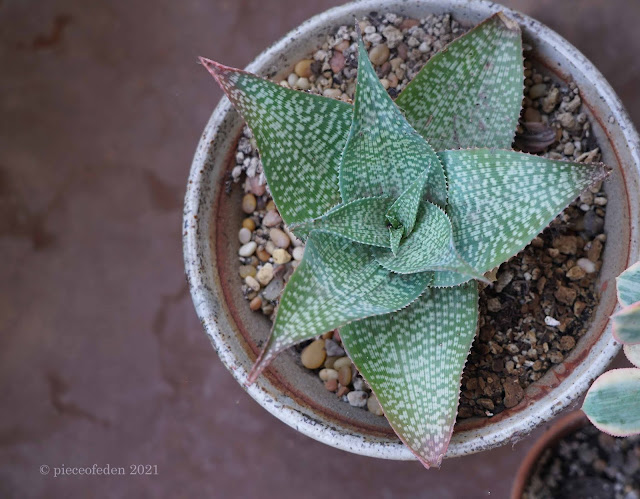 Not forgotten, but a small surprise from A. capitata 'Yellow Hoodie' that had not emerged in time for the previous post--a flower stem!  A first!  It would be wonderful if both capitata var quartzicolas flowered at once, so I could pollinate one with the other and get pure capitata seed. 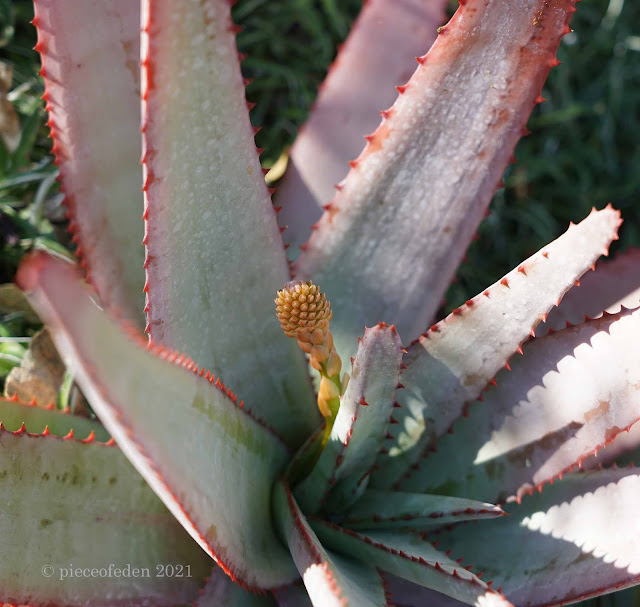 A different omitted deltoideodonta, the name of which has some variation,  (var fallax or var candicans).  It's the longitudinally striped plant mixed in here with an Agave 'White Ice', Aeonium 'Kiwi',  and Sedum 'Coppertone'.  The species is sensitive to water sitting in the base of the leaves and winter-wet soil, and is the rare plant that is happier in a pot here: 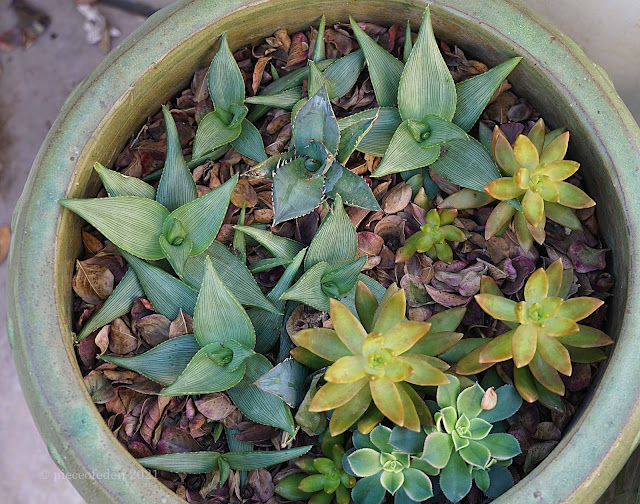 Omitted A. gariepensis, a very fine solitary Aloe.  I had a beautiful large specimen that inexplicably died--my guess due to a large mass of ants nesting around its roots. This is a replacement that needs to grow a bit more before moving to the more challenging conditions on the front slope: 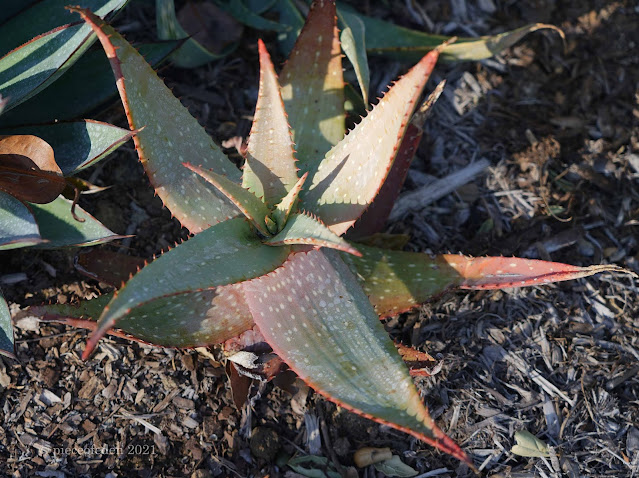 Ridiculous omission:  how could I forget the most common Aloe of all, Aloe vera?   Millions of people the world over grow this Aloe as a houseplant, and   "Currently it is listed as invasive in countries across Europe, the West Indies, Asia and America".

It sometimes will form a chaotic thicket of rosettes, but is most beautiful grown large and solitary: 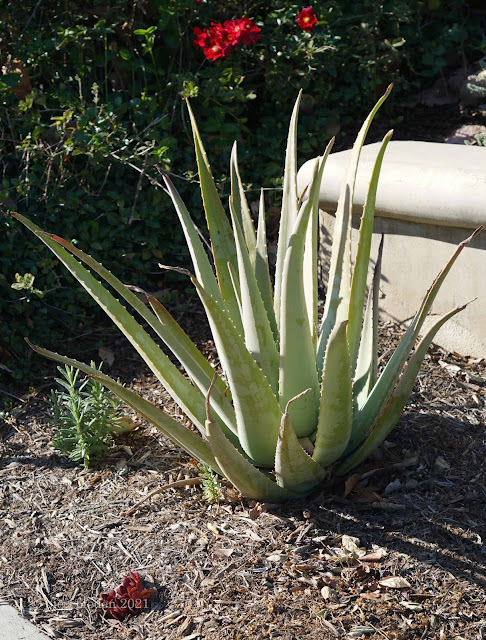 Also unintentionally omitted:  an aculeata/cryptopoda hybrid (foreground), and striata ssp karabergensis (middle)  There's gariepensis again, above and slightly to the right of the striata.  'Blue Glow' is the Agave: 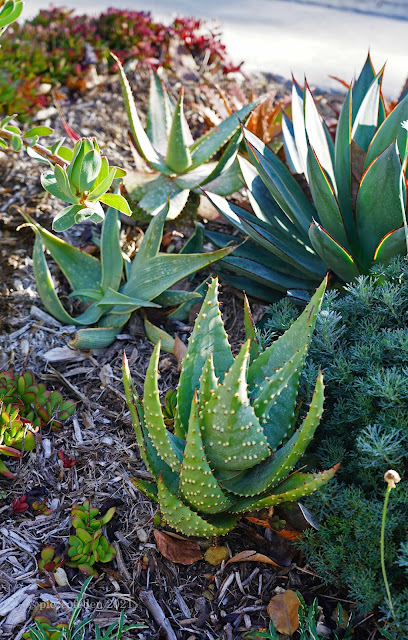 Okay, that's all of them.  In other garden news, we're back to misty mornings... 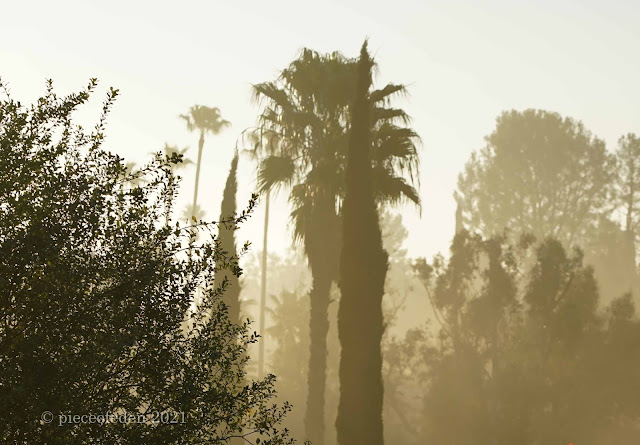 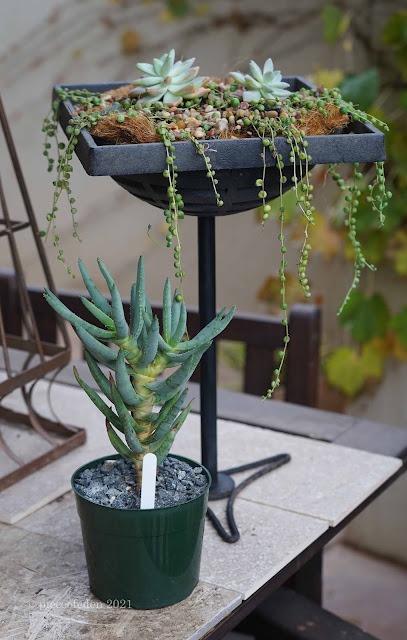 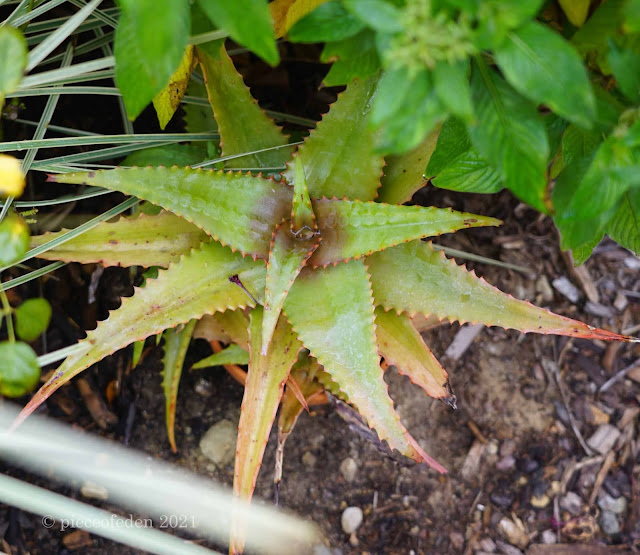 There.  Finally!  That's all the Aloes.  Now I can close with some roses. 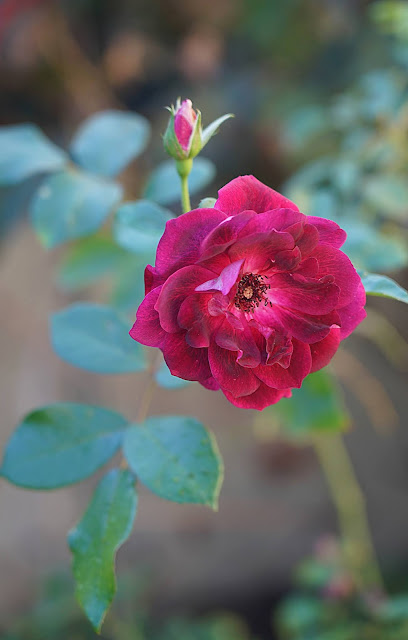 'The Prince' battered by Santa Ana wind and 10% humidity, but still princely: 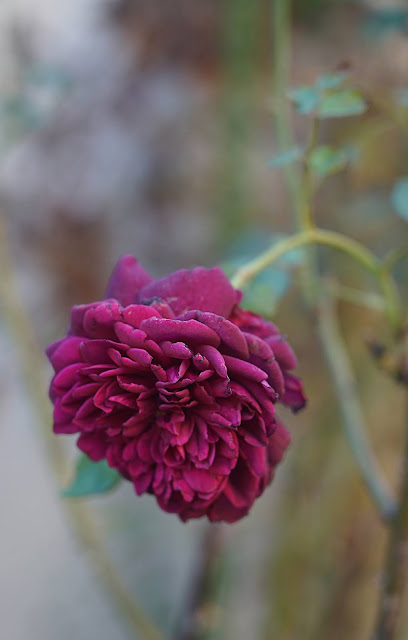 'Earth Angel' who battles for space with Lomandra 'Platinum Beauty': 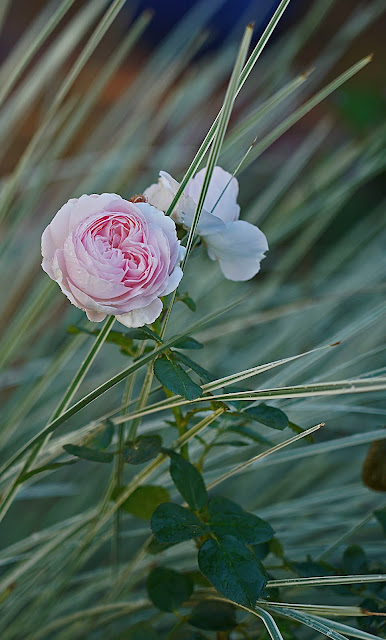 Bouquet to save blooms from desiccation on windy days: 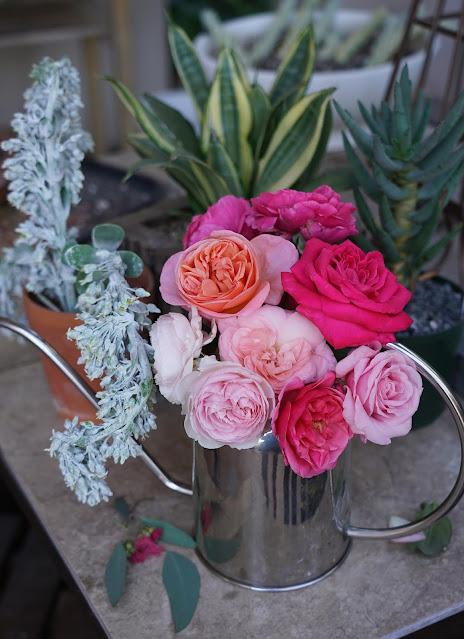 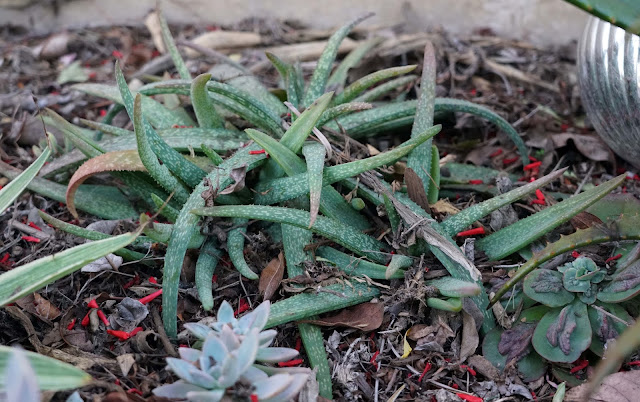 And vaombe.  A very small vaombe that survived my neglect: 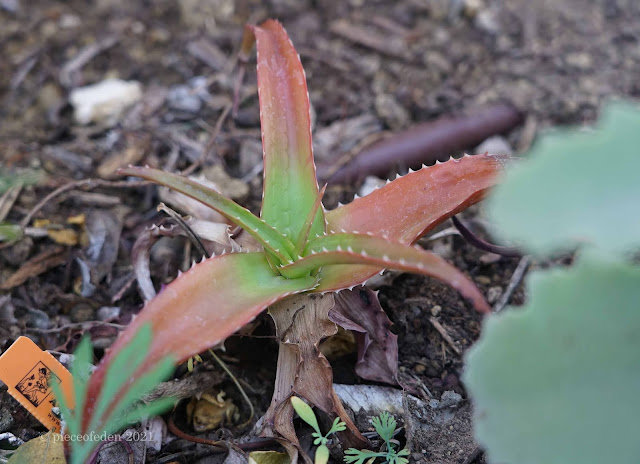 Okay, now I'm fin--uh, nope.  Juvenna, a small Aloe.  I didn't have the heart to trash a dried up near-dead stem, instead shoving it under 'Golden Celebration' rose.  Of course, it survived.  Perhaps explaining how Aloe vera became invasive--toss a dried-but-not-dead piece of Aloe into a favorable location, and it may survive. 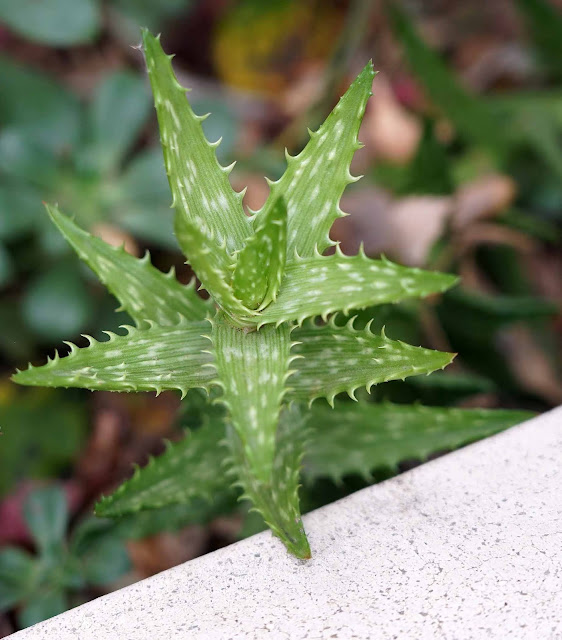 ...and also managing to thrive, sinkatana, aka zubb, which called attention to itself, reminding the gardener it had been forgotten, by flowering at the right moment for this post: 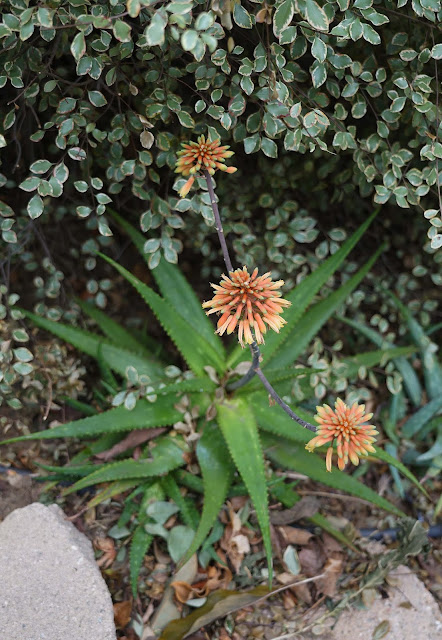 That must be all of them. 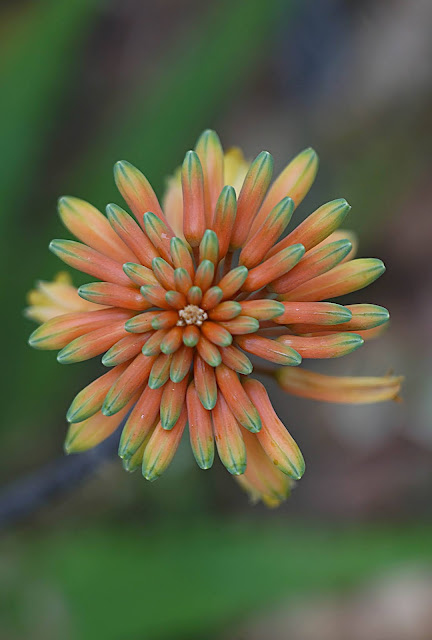 Now I'm sure it is.  Pretty sure.  Fairly sure.