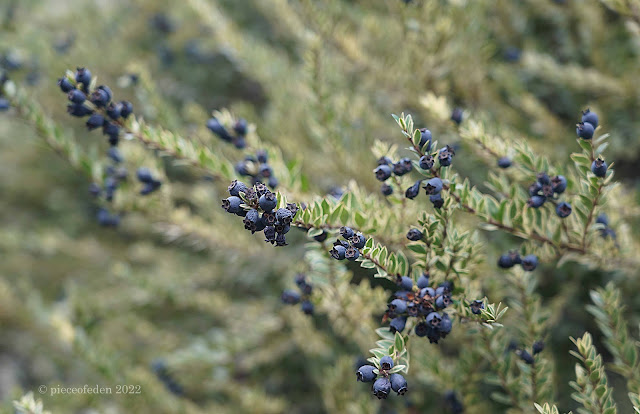 The grey-brown hills are developing a greenish tinge.  Much of those hills burned in the fire of November, 2020 (I think).  The dark spots in the next photo are likely Malosma laurina, a lignotuber-forming native shrub perfectly adapted to periodic wildfires.

The arrow indicates a landslide that occurred about a decade ago, which is why this line of hills isn't covered with homes.  Hooray for unstable geology! 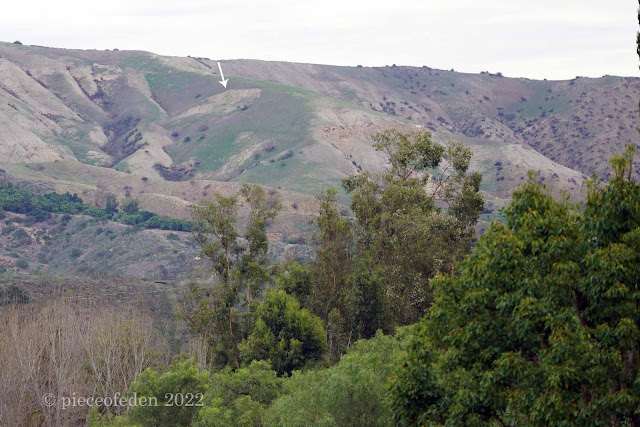 Meanwhile, in the garden...our native oaks, I have read, drop all their leaves each year.  They do a good deal at this time of year... 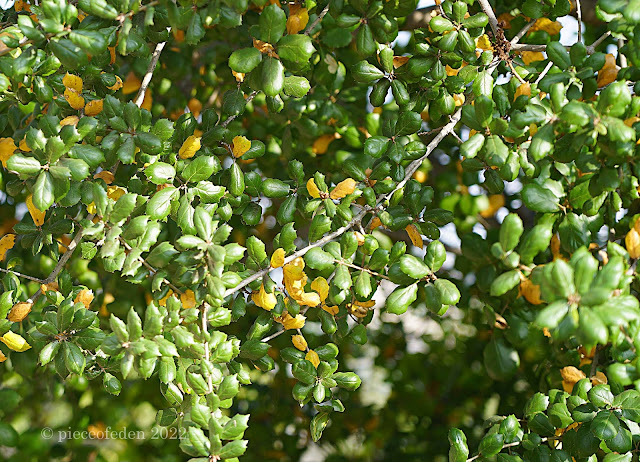 ...but if you were not paying attention, you'd miss it.  They are discreet about their change of outfit.

Various bromeliads.  Placing them on stumps has been a big success: 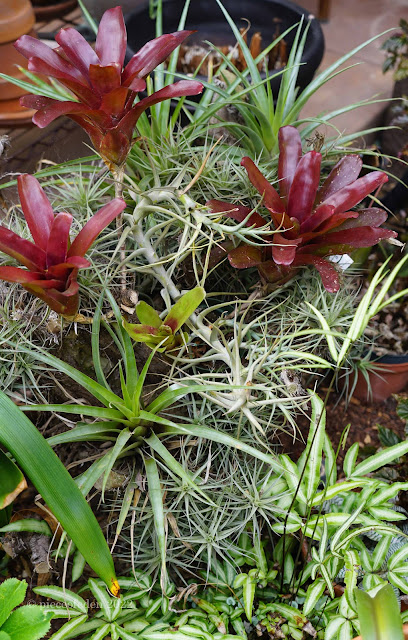 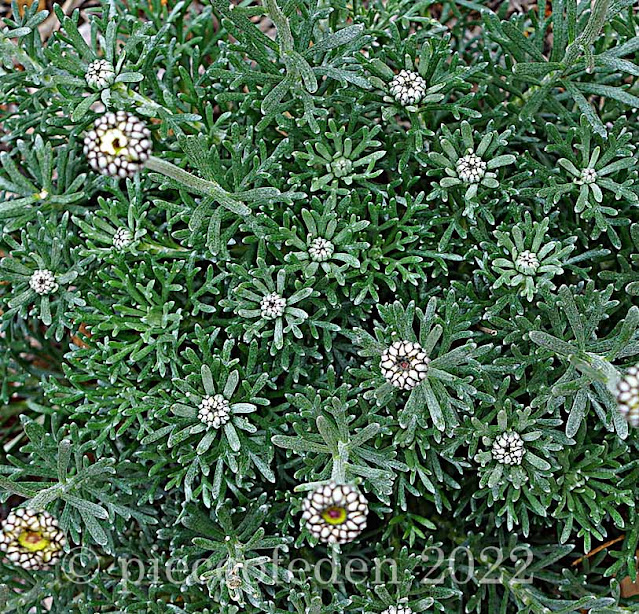 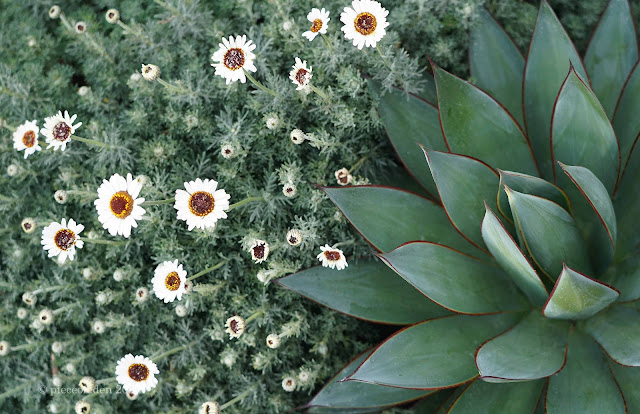 Pulling yellowed Gerbera foliage enables more light to get to the base of the plant... 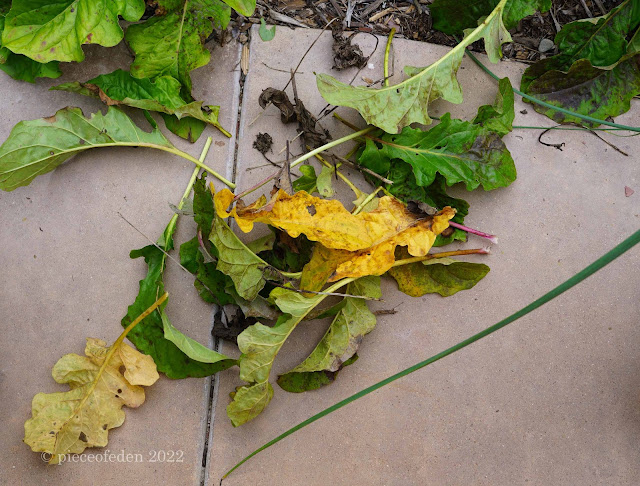 ...which appears to promote better flowering: 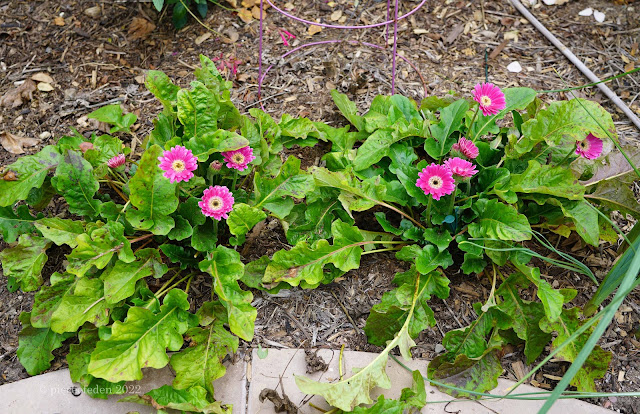 Also tidier.  This is the essence of gardening:  the human hand interfering--or collaborating--with the floristic kingdom.  We'll call the good kind "collaborating". 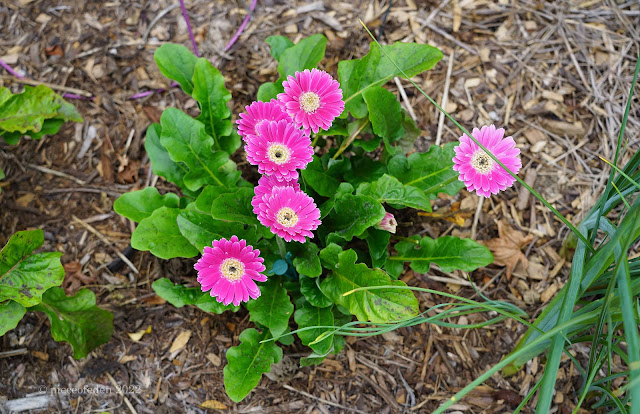 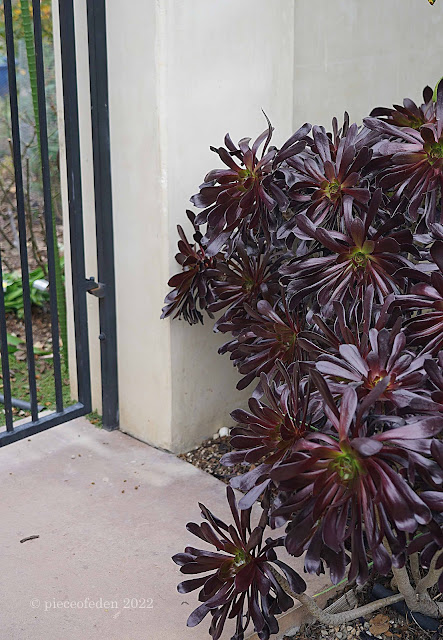 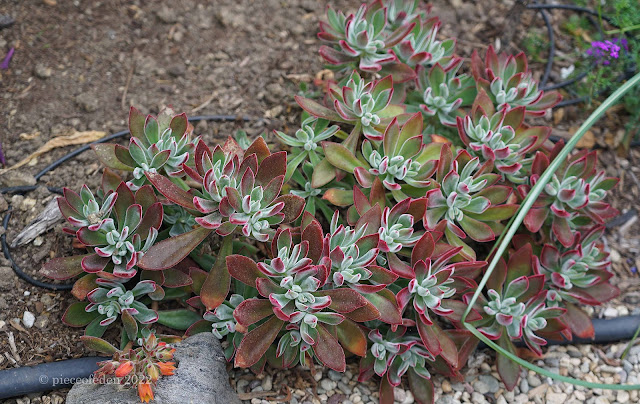 Agaves wash up nicely, too.  This appears to be 'Sun Glow' rather than 'Snow Glow'.  Purchased unlabeled.  Having grown both, 'Snow Glow' is prettier, but 'Sun Glow' is hardly shabby: 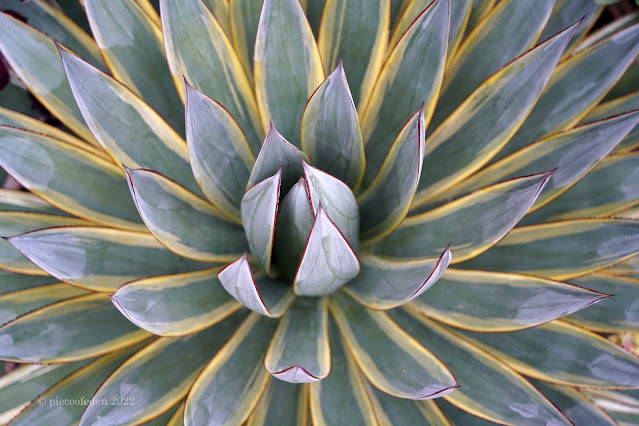 Fruit is ornamental, too.  I brought some to a food bank to reduce the strain on the branches.  It was nice to get out of the house for an hour.  If some needy person enjoys an orange, that's good, too. 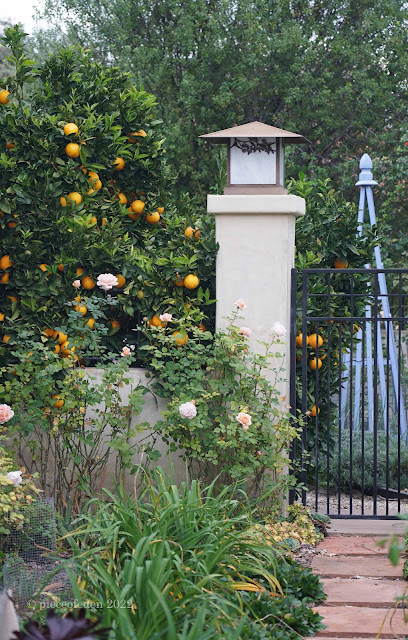 Foliage masquerading as flowers.  A bract is a modified leaf. 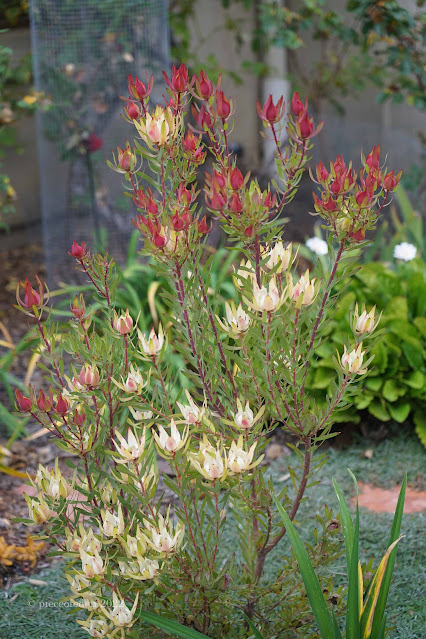 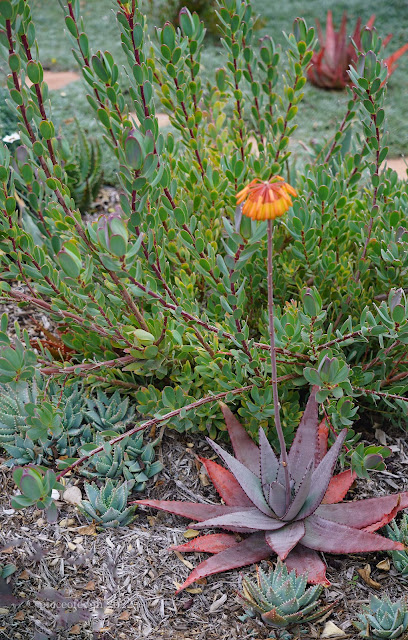 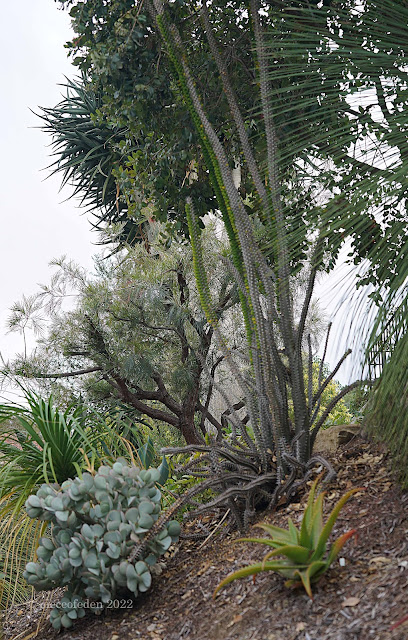 Aloe marlothii became heavily shaded by Grevillea 'Moonlight' over the past year or two and developed Aloe rust as a result.  One intention in hard pruning 'Moonlight' was to get marlothii back into sunshine.   Flower stem just appearing: 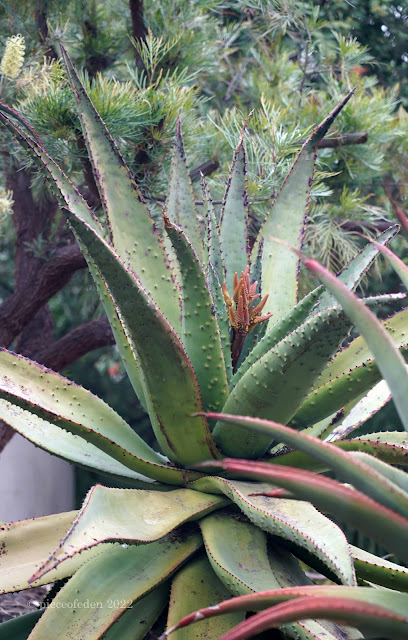 Trachelium caeruleum usually looks quite dreadful in winter.  This one was badly "trimmed" by rabbits all last summer.  Seems to have done it good. 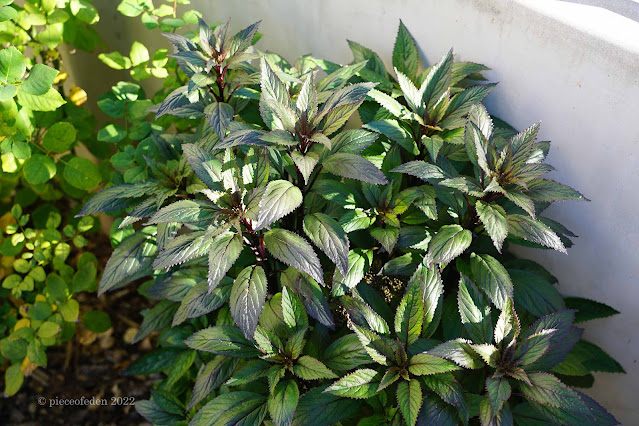 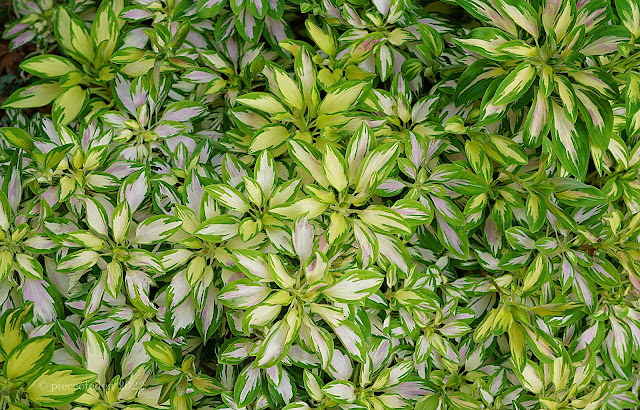 Speaking of foliage yucky,  not all the foliage looks good in our winters.  Pentas, for example: 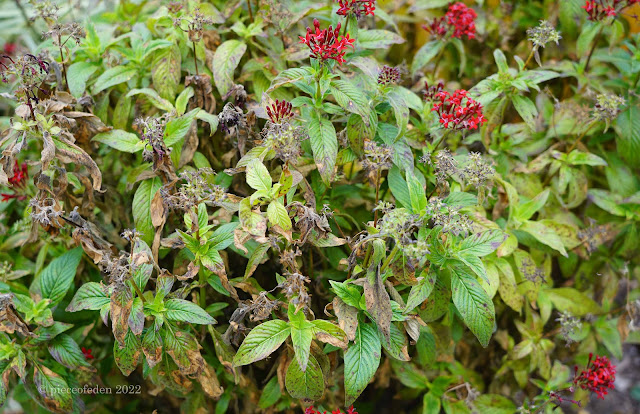 it's a dilemma most winters:  keep the Pentas or pull them and plant new ones the next spring.  They'll look decent over warm, dry winters.  This wet "cold" December we had made them as above.

December also does a number on rose foliage, but so does pruning: 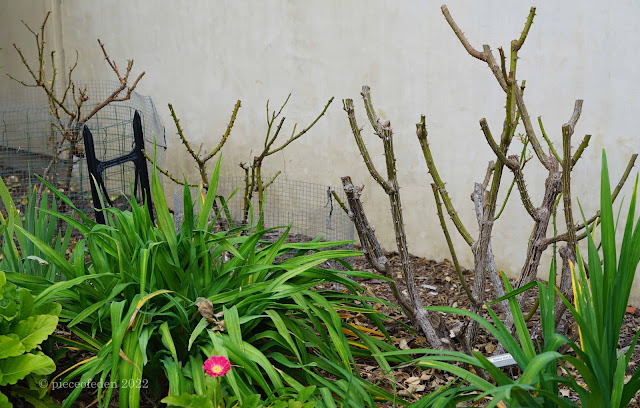 One more foliage problem--apparently due to the current Omicron situation, the local waste disposal company has been unable to empty the green waste bins currently jammed full of rose and other clippings.  More stems sit waiting in whatever can contain them. 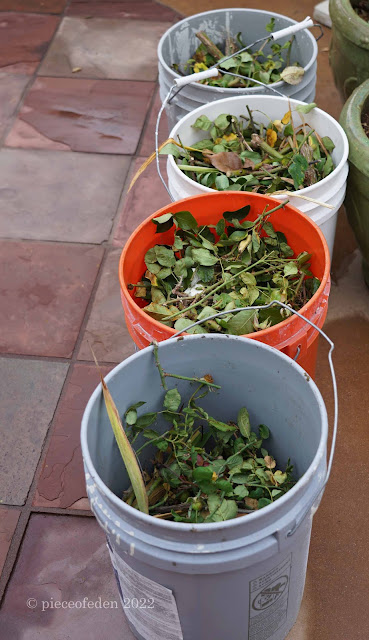 The bins finally got emptied just before sunset yesterday.  Pruning can continue.  Hopefully all the drivers who were ill are feeling better and recovering.  Several neighbors and one of Beloved's co-workers have been ill with Omicron, but are recovering.  And so it goes, keeping priorities straight.

Whenever the isolation and the constant terrible events in the news get me down, time in the garden working at collaborating chases away the blues. 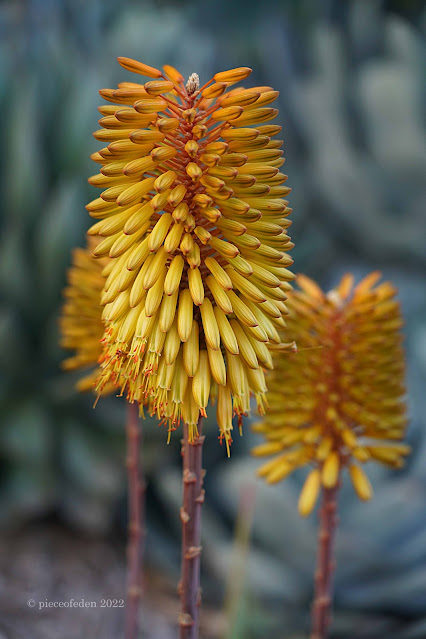 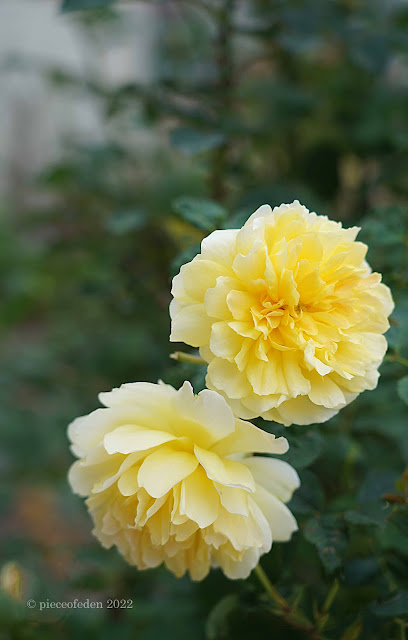 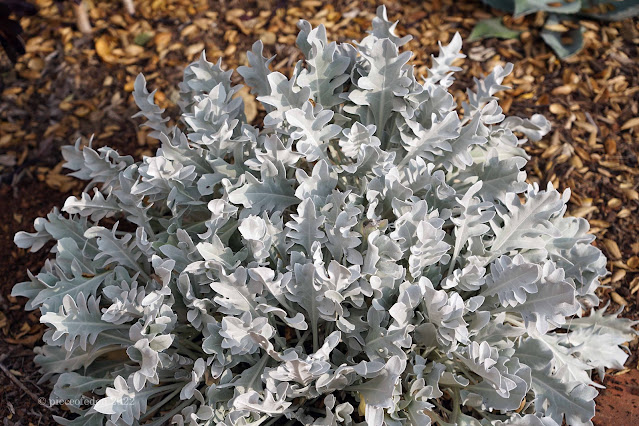 Does your garden chase away the blues?  I'm guessing yes.

Foliage Only Gardening In The Time Of Covid-19

Kris Peterson said…
Interesting that your green bin pickup was affected by Omicron-related staffing issues - we're experiencing an impact on mail deliveries. I've been spending most of my time in the garden, avoiding trips everywhere except to the market. I've even devoted some time to my neglected back slope!

I love your Aloe capitata and will keep my eyes open for that species. As to Pentas and Trachelium, I struggle with the same issues and am currently tempted to give up on both as neither bloom for me as well as they do for you.
January 20, 2022 at 11:17 AM

luv2garden said…
Yes even in the dead of winter my garden makes me happy. I feel sorry for people who live on tiny little properties which make it challenging to get out and enjoy some personal garden space. Your garden offers up lots to be thankful for. Thanks for sharing.
January 20, 2022 at 9:17 PM

Hoover Boo said…
Mail, huh. Have not noticed that.

That's great you've had a lot of gardening time and been able to work on that back slope. The fire ants are dormant in winter? Scary little beasties.

I'm wondering after seeing the Trac. that looks unexpectedly good this winter, if they can be treated like the Cuphea--cut back at the right time so they look reasonably decent, if not their best, during our winter. I'll be trying that this early autumn.
January 21, 2022 at 2:24 PM