Garden Tour: The Look On My Face 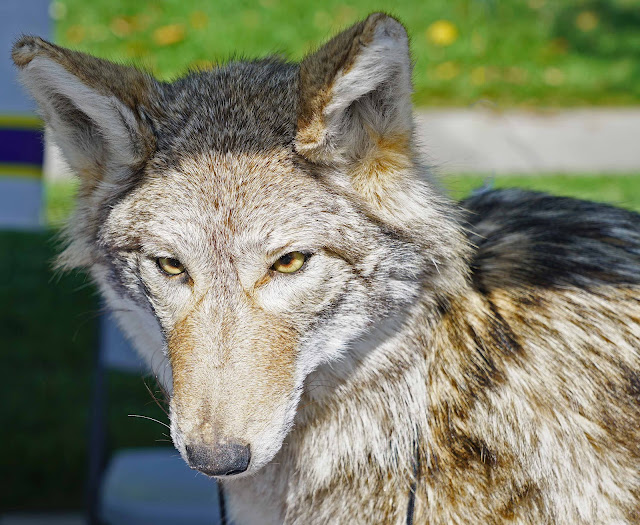 I recently attended an Open Garden Days held in an historic neighborhood (historic for Southern California) within a reasonable driving distance.  Besides the gardens, they had a street of vendors,  demonstrations and some musical talent.  One of the booths was hosted by the State of California and was about wildlife. 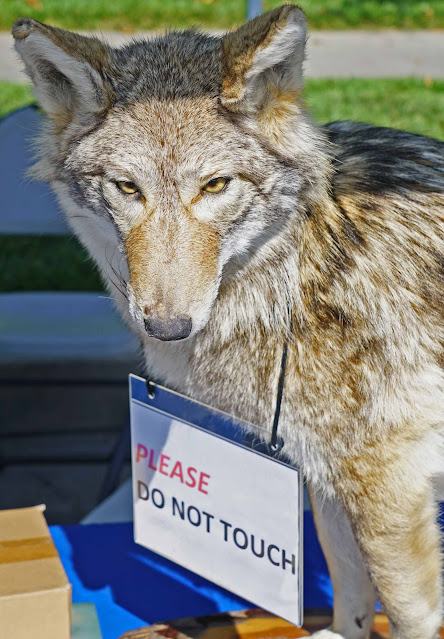 No, the Coyote on display was no longer alive.  It was a juvenile unfortunately hit by a car, and its taxidermed afterlife is touring schools and events:

They really are quite beautiful animals: 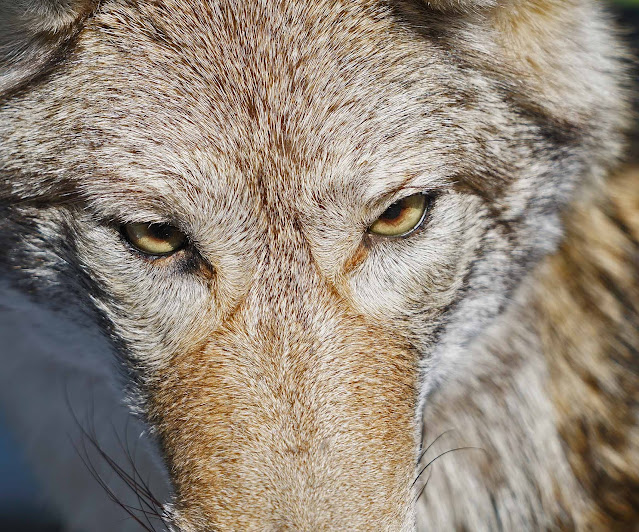 More animated was the booth adjacent, hosted by a Raptor Rescue organization, featuring a very much alive Red Tail Hawk, who had been found badly injured and nursed back to health.  It can no longer fly well enough to feed itself, so now visits schools and events like Open Garden Days, serenely observing the human chaos around it. 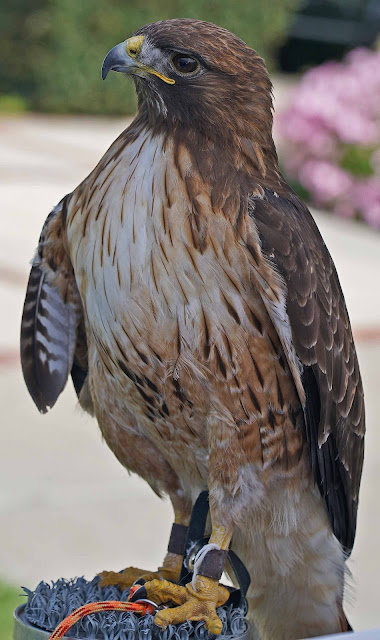 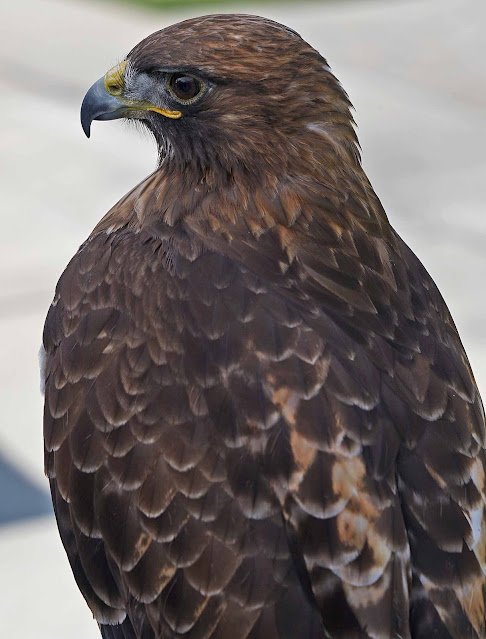 A Western Screen Owl was also part of the exhibit (also very much alive):

Yes I did also take pictures of gardens, for a future post.  Okay, maybe a preview shot or two of the neighborhood... 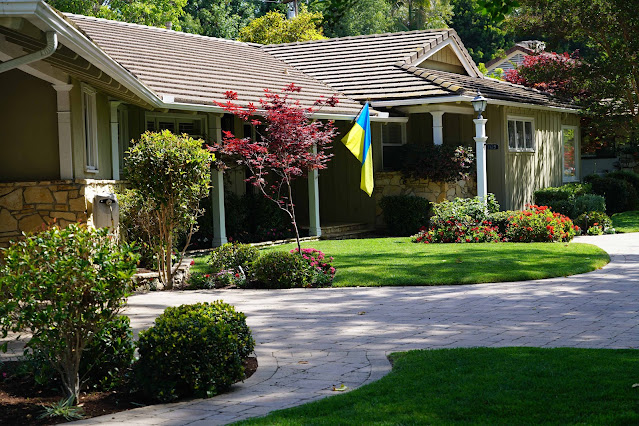 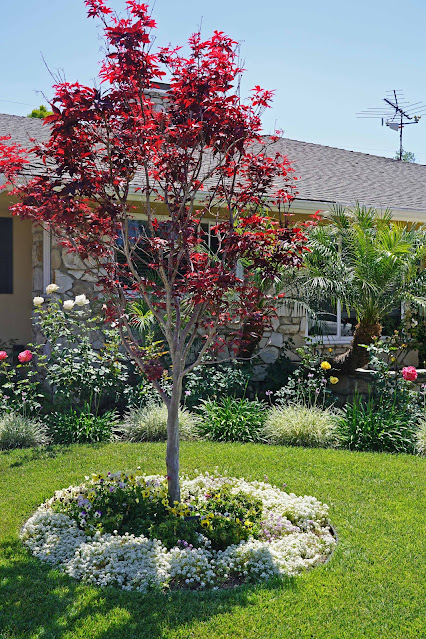 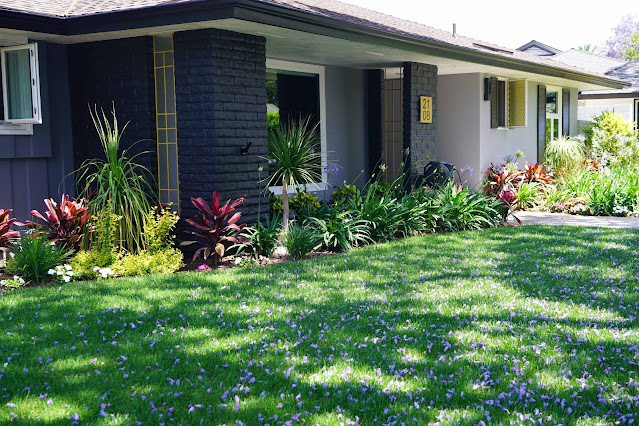 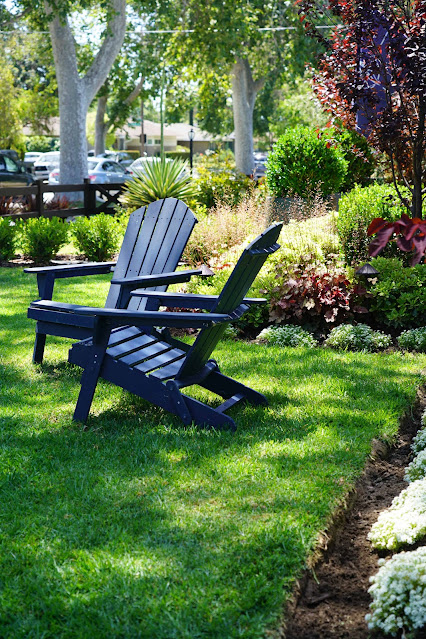 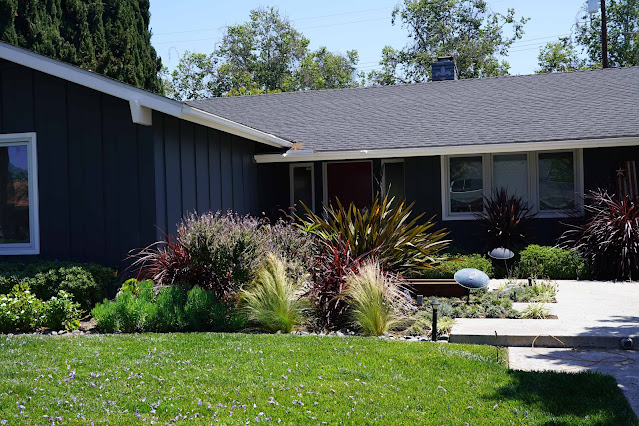 A bit culture-shocked by all the luxuriously green  lawns, as the state warns of water restrictions.  I know when I was looking at those lawns, the expression on my face must have been something like... 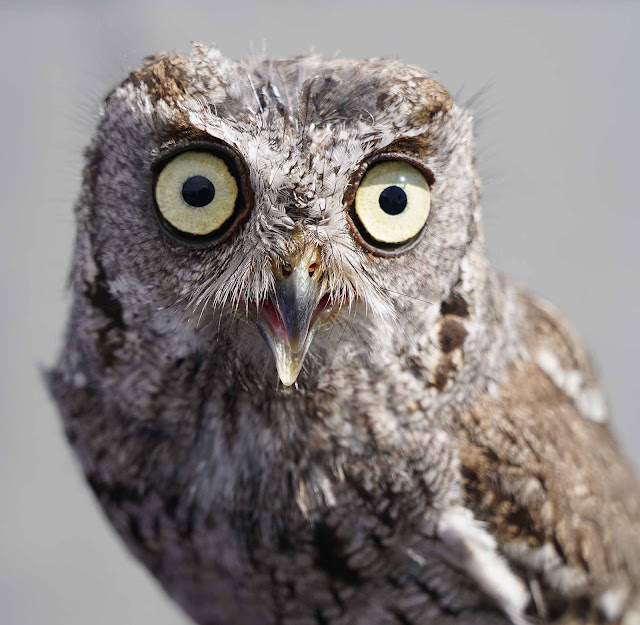 chavliness said…
Goodness, I thought for sure this was a live Coyote spotted in your garden, or your neighborhood. Gorgeous creature. And then, for a moment, I assumed the birds were stuffed as well :-D (aren't owls fun?).
Ya, the lawn... Were those Jacaranda blooms all over it?
Chavli
May 27, 2022 at 8:10 AM

Debbie D said…
I looked at those lawns and thought the same thing as you! When will people learn that we don't live in England! Got rid of my lawn years ago. Have 70% California natives and no, my yard is beautiful with lots of flowers, greenery, etc. It is not a fire hazard. It is not just rocks and nothing else. It uses very little water and when more of my natives get established, they will get no water during the summer and just rainfall in the winter. And believe it or not, I do have a rose or two as well! Also, no fake lawn as they are heat sinks.
May 27, 2022 at 9:17 AM

Kris Peterson said…
I was wondering how you got a closeup like that of the coyote! I expect I also had the same look on my face as the owl when I saw those pristine emerald green lawns at the end of your post. There's a lawn like that directly across the street that gets watered 4x per week. I understand their last water bill was over $800 but apparently they're undaunted - I can't help but hope the water service is planning to take affirmative action to monitor water use after June 1st. It's going to annoy me to no end if we all have our water use further restricted because of the actions of scofflaws.
May 27, 2022 at 11:25 AM

Denise said…
Ah, I'd recognize those blue flowers on the lawn anywhere! The captive wild creatures are wonderful ambassadors for their species, perhaps unwilling but nevertheless doing good work!
May 27, 2022 at 11:51 AM

Horticat said…
Gorgeous creatures, particularly that owl. California’s drought woes even made the Australian news last week (of course, drought is also a huge issue in parts of Aus, although not this season - floods!). I’m amazed that Californian lawns are allowed to be irrigated at all if water supplies are at such dire levels.
May 29, 2022 at 2:50 PM

Hoover Boo said…
@chavli, If I had a telephoto lens I could get some coyote photos as a trio lives in the thicket behind the house across the street. Yes, owls are wonderful. We often hear them in the night. Right, Jacaranda flowers.

@Debbie D, yes the lawns in the UK are amazing. CA is just not lawn climate. We got rid of our lawn as well. Here I've got some CA natives and am experimenting with plants from Western Australia, a very dry place--I fear CA natives will not survive much longer if the lack of rain grows worse. Roses, though--yay! :)

@Kris, house next door to me their bill is 1K+. Actually I think it benefits my Avocado tree. I just wish those with lawns would do something about the runoff. Another neighbor the water pours off the lawn and down the road.

@Denise, yep, its Jacaranda time. The birds could not survive in the wild, so at least they have something of a good life. They seemed very calm and well cared for.

Anna K said…
I'll echo Debbie's remark about so many thinking every garden needs to look like an English garden. Such an incredibly tone deaf gardening philosophy... Thankfully, a lot of people (including up here in much wetter Oregon) are taking a lawn free approach. Just met with someone on Saturday who wants it all gone.

Hoover Boo said…
@Horticat, apparently La Niña gives you in Oz floods, and gives us drought, and El Niño gives us floods, and gives Oz drought. Hmmm... Anyway, there's an election on June 7th, and probably the politicians are waiting until after the 7th to start restrictions. Nevada the desert state adjacent to CA, has simply outlawed lawns (except certain "functional uses" like athletic fields and golf courses). I think they should do that here, then shut up about resident use of water. 85% of CA water goes to agriculture.

@luv2garden, that little screech owl was such a...can I say "hoot"?

@Anna K, no-lawn is slowly becoming more common--is finally becoming socially acceptable, which is a lot of the battle. Someone recently commented to me that they "needed" a lawn because it has a cooling effect, but I was tempted to reply that so does our native Oak, which lives just fine on rainfall alone.

New homes are increasingly built out to the lot lines (on much smaller lots) so there is hardly any planting any more in the newest neighborhoods, just narrow mustaches of shrubs. :(
May 30, 2022 at 3:34 PM