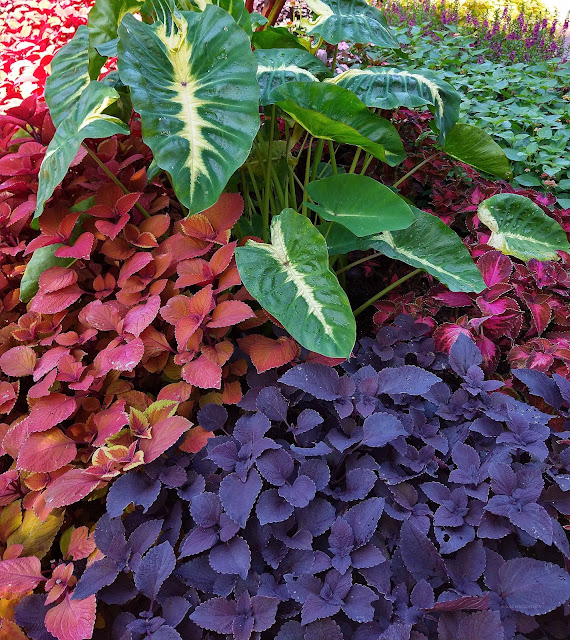 Left the camera home.  Phone-tos instead record a  recent visit to Sherman Gardens in Corona del Mar, a jewel-box of a botanical garden--small, but intensively replanted seasonally with some of the latest new plant introductions.

Underplanting a Camellia, an arrow points to Artemisia mauiensis 'Makena Silver'.  The white-silver foliage insisted on the eye's attention.

The phone's camera was unimpressed: 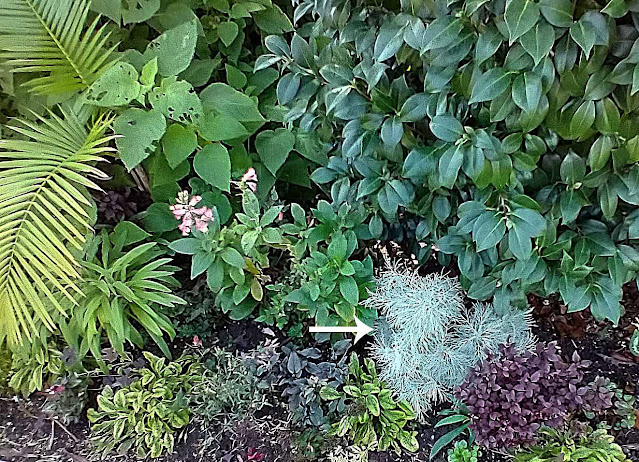 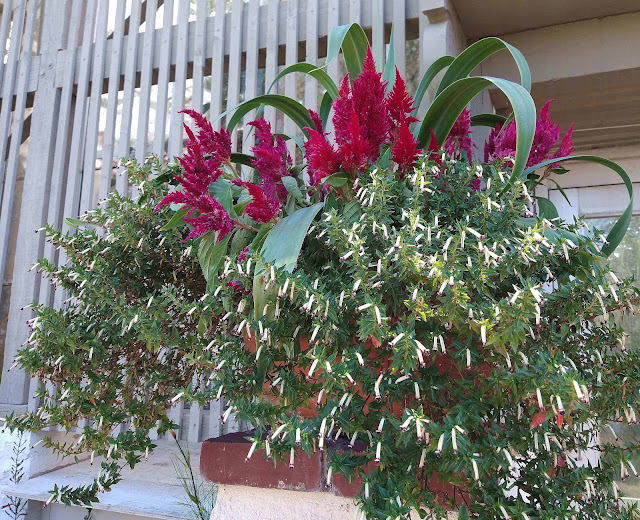 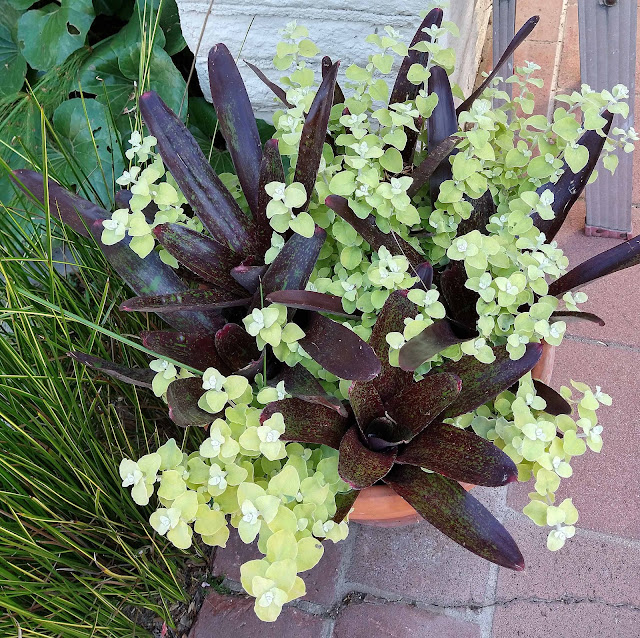 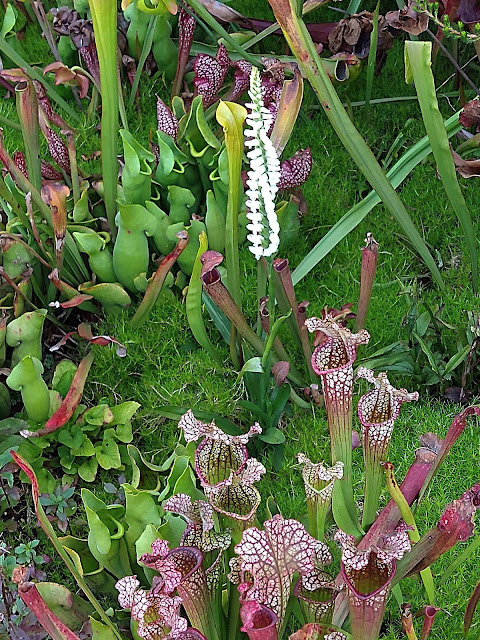 Calothamnus with Dyckia and Aeonium 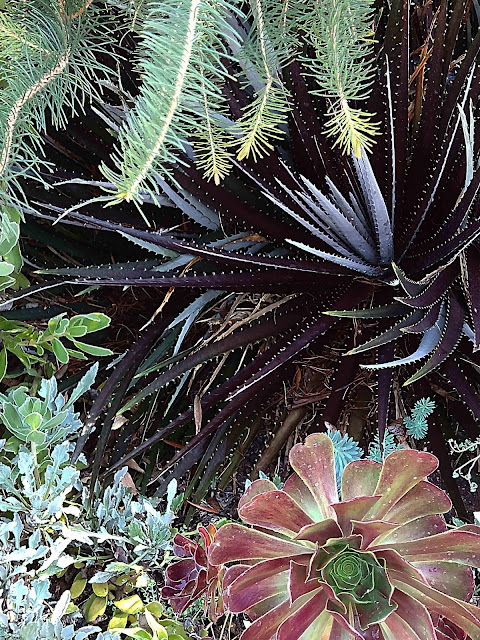 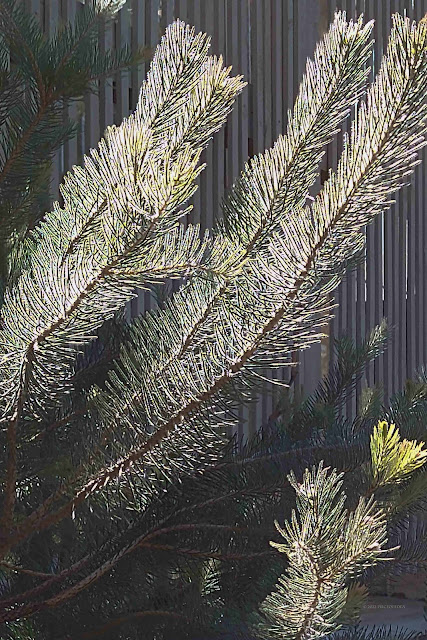 Sherman was featuring works by mosaicist Irina Charny.  This one had a Gustav Klimt vibe: 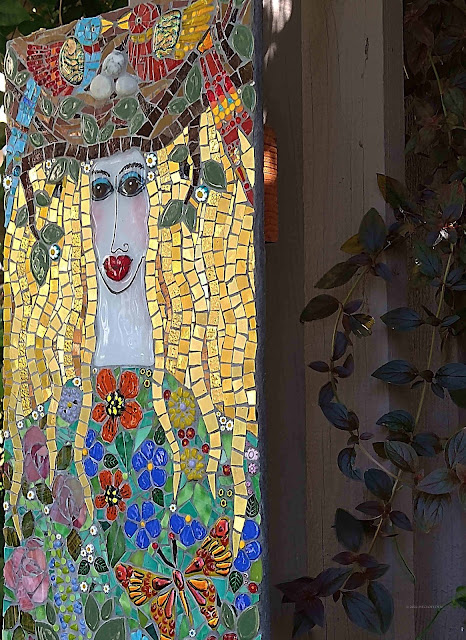 Protea 'Pink Ice' with some Restios, among other things. 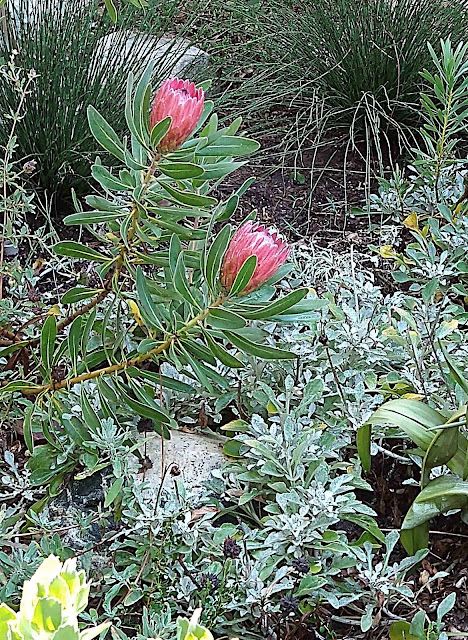 Another of the mosaics: 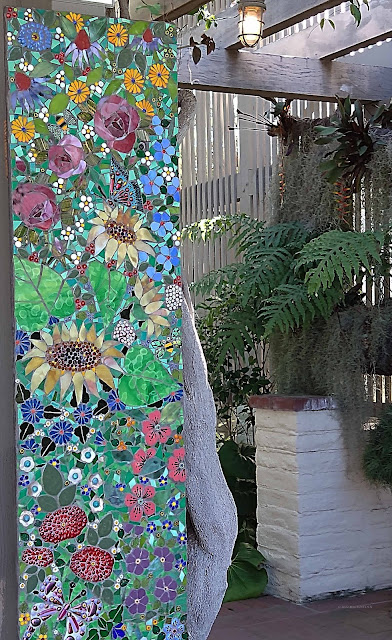 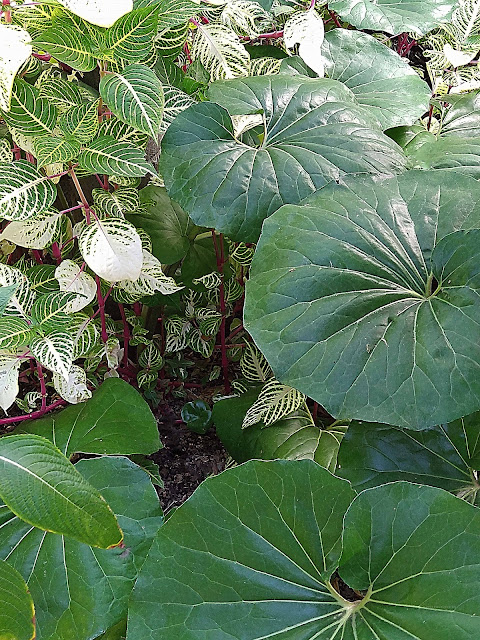 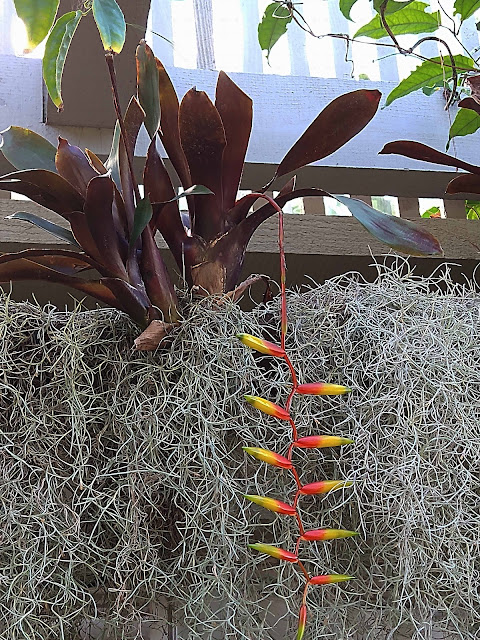 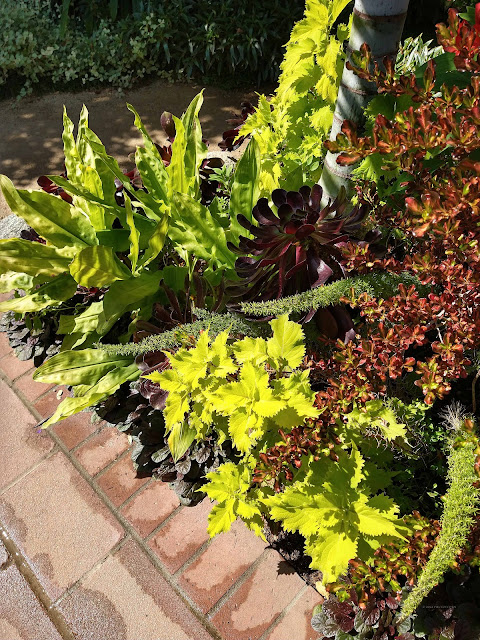 This line of compact grass appears to be Pennesetum glaucum 'Jade Princess".  Again, dark or bronzy foliage playing off chartreuse. 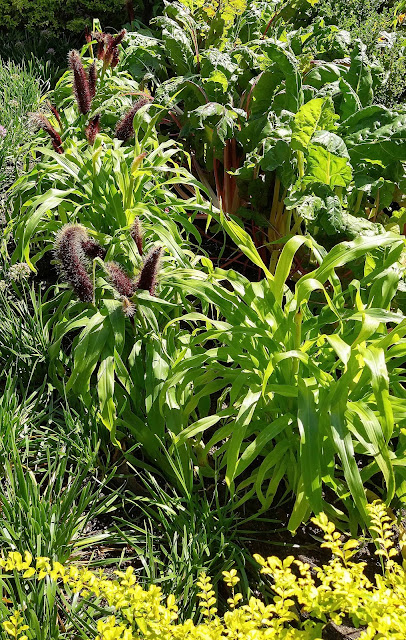 Amid Rudbeckias, Pennesetum glaucum 'Jade Princess', Ligustrum sinense 'Sunshine' (my guess) an aqua glass globe acts as focal point.  'Sunshine' is a new sterile selection.  Ligustrums are an invasive problem in some areas east of the Mississippi.  The seeds are spread by berry-eating birds.  Hence:  horticultural work on sterile versions. 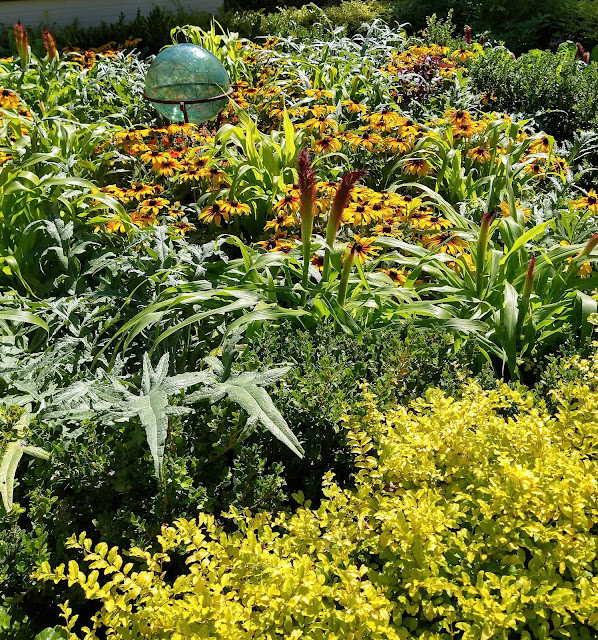 Another mural. The most brightly colored pieces were visually jarring nestled among natural foliage and flowers.

Another view of the Rudbeckia area from inside a small open building. 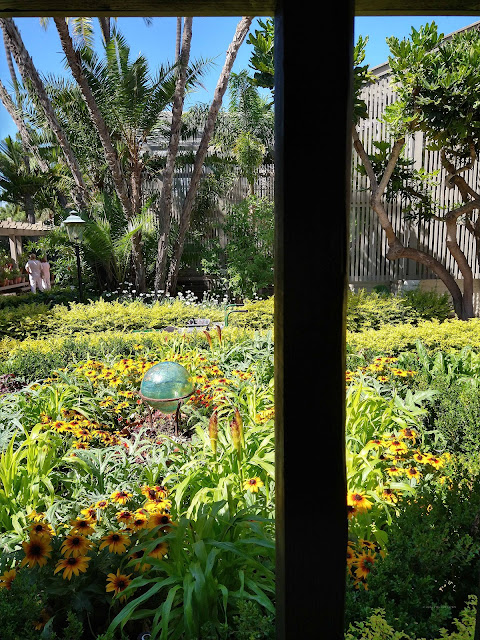 Another piece inside the building, where it did not have to compete with nature: 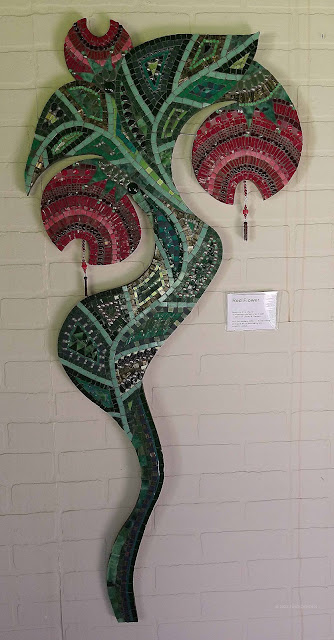 By some visitors comments and movement, it appeared they went from mosaic to mosaic, paying little attention to plants.  Everyone has their special interests. 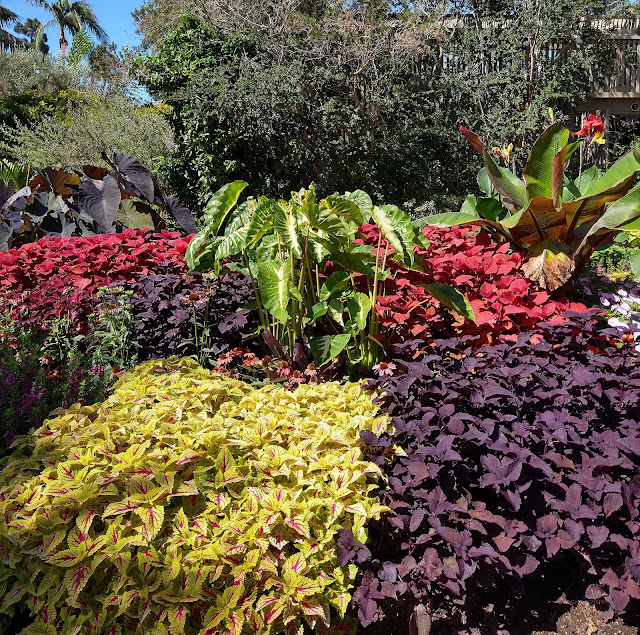 A patch of Angelonia there, too. 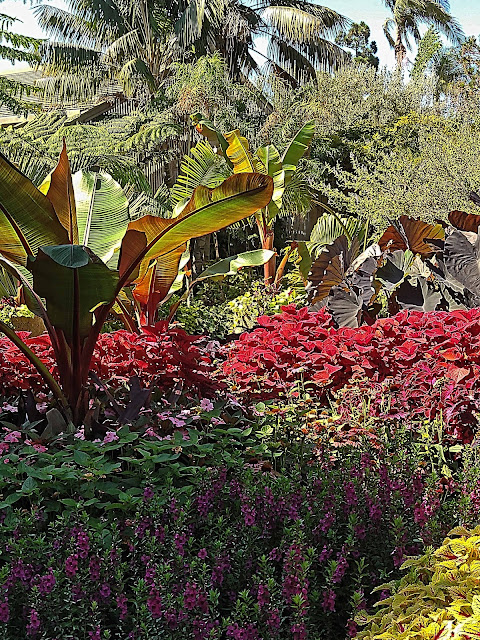 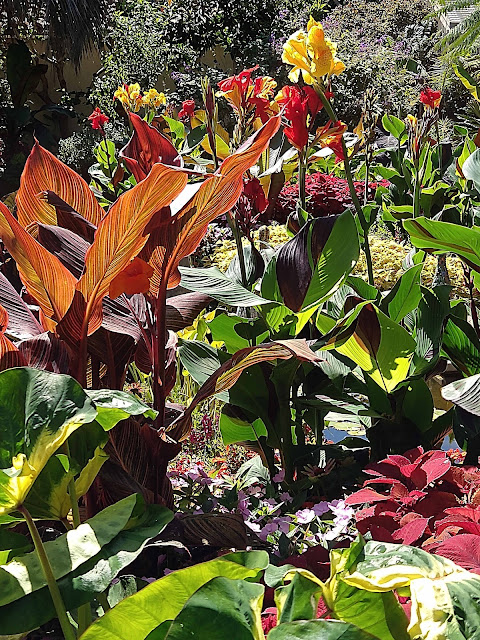 I struggled with the phone camera.  They are less obtrusive.  I did discover the phone's flashlight feature while futzing with controls, among other things.  A finger brush would unintentionally keep switching the Camera Ap into video mode, so the visit produced many three second videos ending with a swear word. 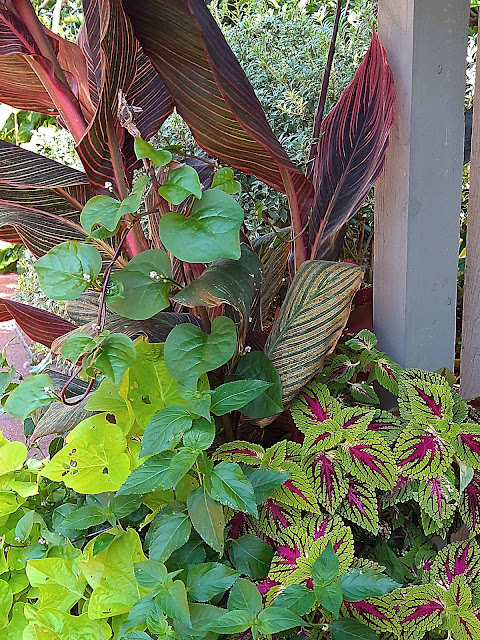 A Hoya dangling down from a basket on the way to the Cactus and Succulent garden. 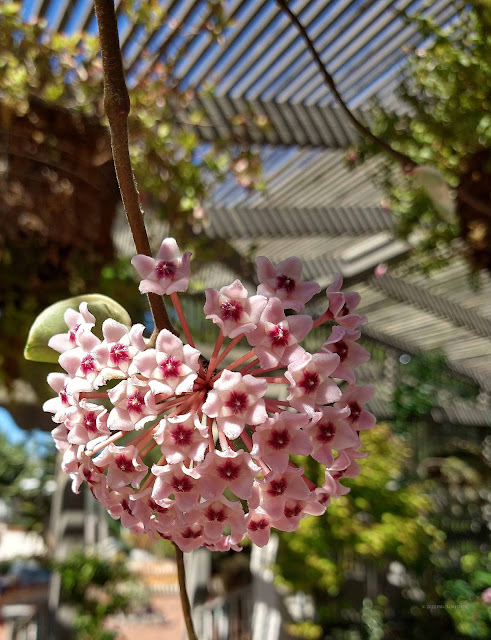 Just one quick image from the C&S garden, some of which was awaiting an end of summer clean-up.  It was approaching noon by then; visitors were streaming in for a garden restaurant lunch.  Time to leave. 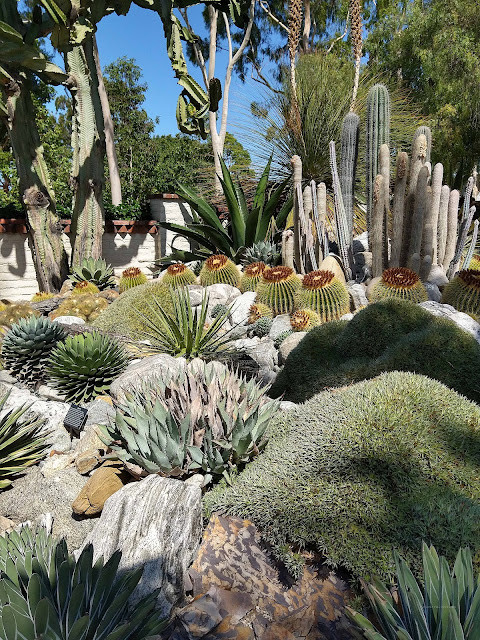 Last shot:  a flat of ornamental Bok Choy awaiting planting.  Gardeners were starting the transition from Summer to Autumn. 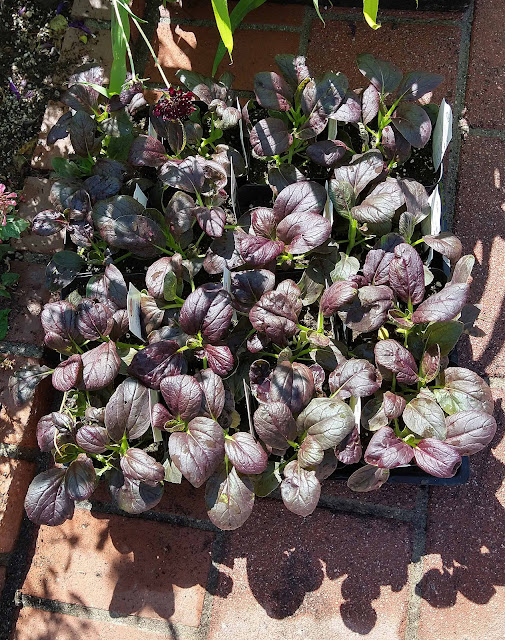 I'm starting it myself.  How about you?