The San Diego designer who created the first "coral reef" style succulent beds has started a trend.  Here in Corona del Mar another designer created the Sherman Gardens version, not as "coral reef-ish" (no plastic fish) but just as beautiful.  Perhaps it should be called a succulent tapestry rather than a coral reef.  It omits some plants that create a distinct coral-like effect, such as Euphorbia caput-medusae,  and cristate or monstrose forms of plants like Euphorbia lactea cristata.  A drawback of choosing those plants is the price, availability, and sometimes fragility of cristate and monstrose specimens.

Shrubby silvery Crassula arborescens on the right, an Aloe in back, Bromeliads on the left, Senecio serpens (or mandraliscae) below: 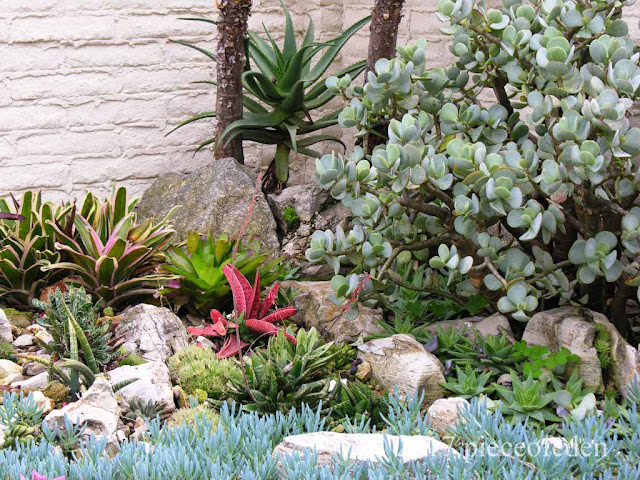 Even at a dollar apiece, several hundred Echeverias can get pricey.  So start planning and propagating now, and by the time you have 500 Echeverias ready to plant, the "coral reef" style will be long passe.   No, seriously, it is beautiful.  It's glorious, as a matter of fact.

Variegated Agave americana 'Medio Picta Alba' next to the trunk of an Aloe dichotoma, Senecio radicans cascading from the basket on the left, blue Senecio and Echeverias below: 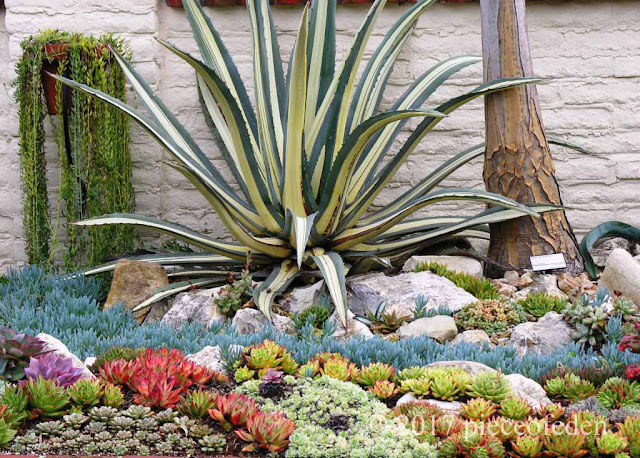 Dasylirion wheelerii there on the right, on the left a few bromeliads, a blue river of Senecio serpens (mandraliscae?) below: 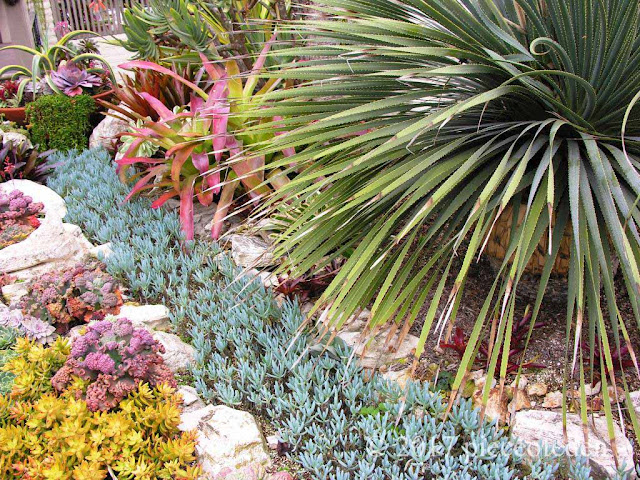 Echeveria subridigda and other species of Echeveria, Echeveria 'After Glow',  Echeveria 'Perle Von Nürnberg', with small hybrid Aloes at the center of the encircling Echeverias: I wish I had the budget to create this spectacle:  Blue Curls Echeveria, lavender-grey Graptopetalum, 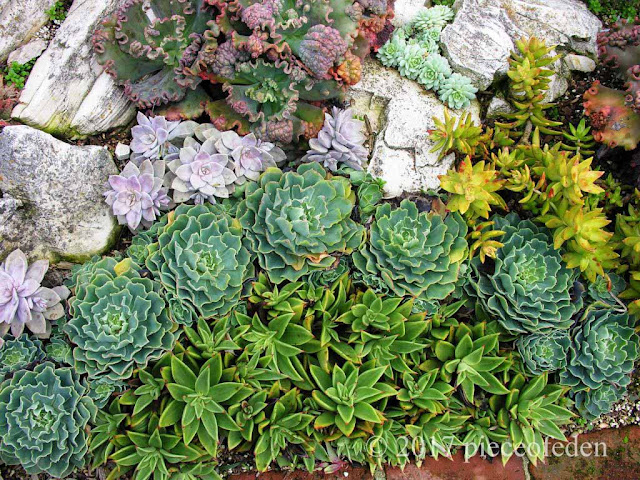 Although this bed looks recently planted, the very mild conditions near the ocean will keep these plants plumper, more luxuriant, and less sunburnt than they would be just a few miles inland: 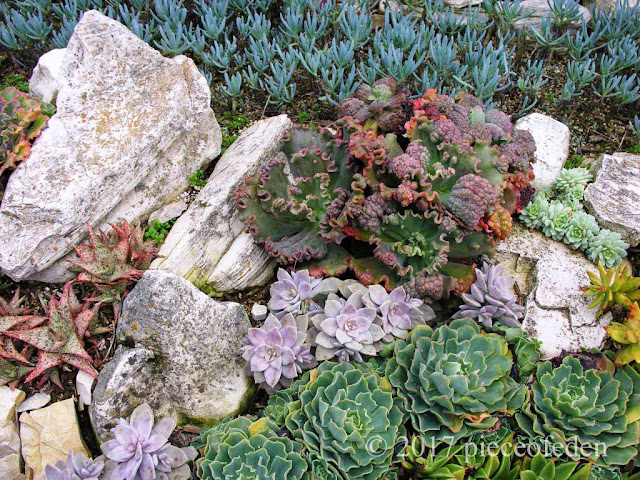 The variegated Agave vilmoriniana 'Stained Glass' will eventually out grow this setting, but for now it is gorgeous, surrounded by bromileads, Graptopetalum superbum, Echeverias.  Sedum morganianum spills from the container: 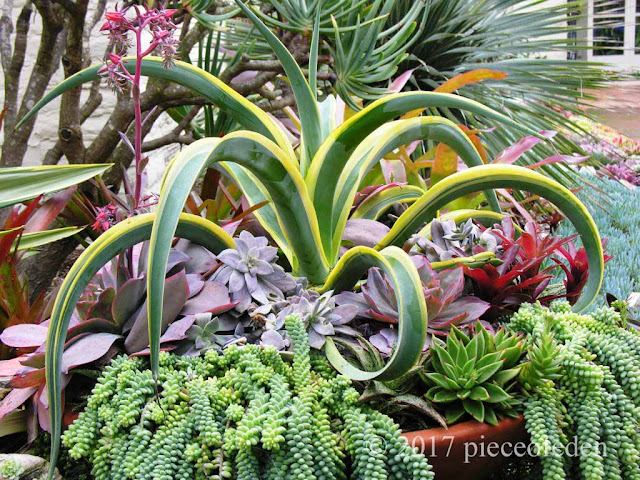 Even the rocks are beautiful: 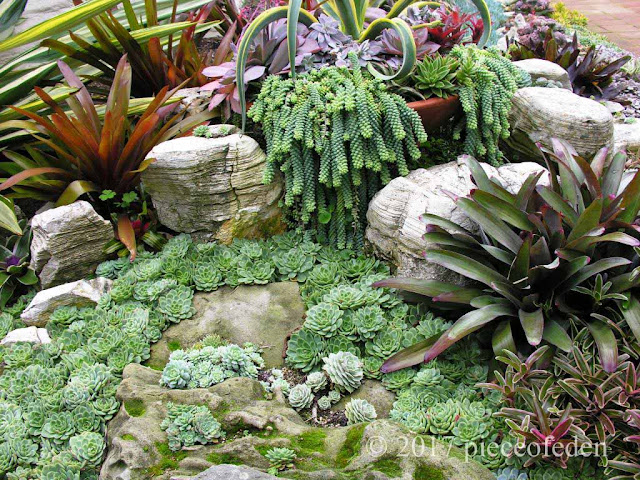 Awesome Furcraea foetida 'Mediopicta'  there on the left, with a sparse (hard grown?) but blooming Aloe pilcatilis at the top center. 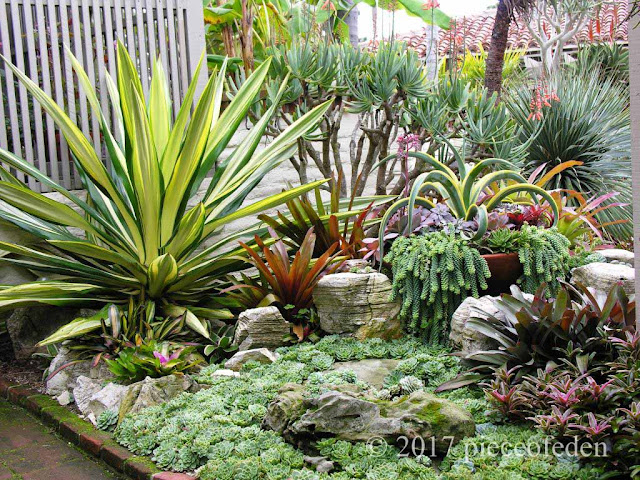 Pink and blue are not necessarily insipid. 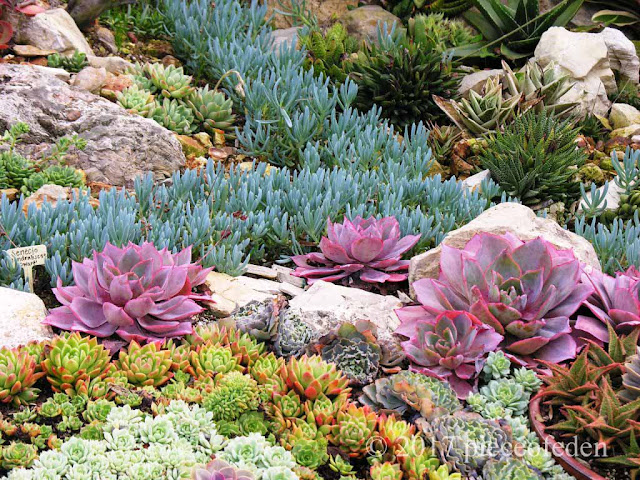